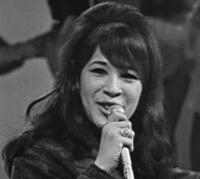 
VERONICA YVETTE BENNETT, aka RONNIE SPECTOR, who was inducted into the ROCK AND ROLL HALL OF FAME in 2007 as a member of THE RONETTES, died after a brief illness at the age of 78 after a brief battle with cancer.

The family released a statement: “Our beloved earth angel, RONNIE, peacefully left this world today “She was with family and in the arms of her husband, JONATHAN.

“RONNIE lived her life with a twinkle in her eye, a spunky attitude, a wicked sense of humor and a smile on her face. She was filled with love and gratitude.

“Her joyful sound, playful nature and magical presence will live on in all who knew, heard or saw her.”

Beginning in 1963, SPECTOR and the group recorded a string of classic pop hits, powerful, poignant teen anthems, most of them featuring husband PHIL SPECTOR’s famed Wall Of Sound, including “Walking In The Rain,” “Do I Love You,” “Baby I Love You,” “The Best Part Of Breaking Up,” “I Can Hear Music” and, most notably, the chart-topping “Be My Baby.”

“RONNIE SPECTOR was the first woman in rock to provoke anything like the hysteria that ELVIS had caused, which was soon to engulf THE BEATLES,” wrote the TORONTO GLOBE & MAIL pop critic CARL WILSON in a 2003 feature on the singer.  With her towering beehive, dark mascara, miniskirts and swagger, she was dubbed “The Bad Girl Of Rock And Roll.”

Born AUGUST 10th, 1943 in EAST HARLEM, NY, BENNETT was the daughter of an AFRICAN AMERICAN CHEROKEE mother and IRISH father.  She and her sister ESTELLE, were encouraged to sing for their extended family, as was their cousin NEDRA TALLEY, all of whom would become members of THE RONETTES.

THE RONETTES were a popular live attraction around the NEW YORK area – singing and dancing at the PEPPERMINT LOUNGE, where they were discovered by legendary disc jockey MURRAY “THE K” KAUFMAN, who promptly hired them as dancers for his BROOKLYN FOX THEATER rock and roll revues. The group signed with the COLPIX RECORDS label, where they were produced by STU PHILLIPS. After releasing several singles without much success, the group joined PHIL SPECTOR’s PHILLES RECORDS label, which he founded with LESTER SILL. That started their unprecedented run of successful singles before breaking up in early 1967, following a EUROPEAN concert tour.

THE RONETTES were especially popular in the U.K., where they headlined over acts like THE ROLLING STONES (where she was pursued by a smitten KEITH RICHARDS), ERIC CLAPTON and the YARDBIRDS. THE BEATLES personally requested THE RONETTES to open their final U.S. tour. For THE RONETTES’ final live performance at BASIN STREET EAST, a young comic named RICHARD PRYOR was the opening act.

When PHIL stopped producing THE RONETTES, he kept many of the group’s numerous unreleased songs in the vault for years, aside from setting up obstacles for any future performances. From 1968-1974, RONNIE was married to PHIL, a relationship in which she was kept under lock and key in their BEVERLY HILLS mansion, unable to leave and threatened with violence.

JEFF BARRY produced the first post-PHIL SPECTOR track, “I Can Hear Music,” using only a small band, recording the trio in a NEW YORK CITY studio. Another one-off single, “You Came, You Saw, You Conquered,” sung by RONNIE but credited to THE RONETTES featuring the voice of VERONICA,” was released in 1969 on HERB ALPERT’s A&M RECORDS label with an old RONETTES B-side, “Oh I Love You,” on the flip. In 1970, RONNIE sang on JIMI HENDRIX’s recording of “Earth Blues.”

In FEBRUARY, 1971, during her husband’s tenure as APPLE RECORDS head of A&R, RONNIE recorded the single, “Try Some, Buy Some,” written for her by GEORGE HARRISON, with the rockabilly-inflected “Tandoori Chicken” on the B-side.  Produced by both PHIL SPECTOR and HARRISON with a band that included him, JOHN LENNON and RINGO STARR, the single failed to take off, but its backing track ended up getting used two years later for GEORGE’s own version of the song on his “Living In The Material World” album.  RONNIE recorded other HARRISON songs during those LONDON sessions, including “You” and “When Every Song Is Sung,” which were never released.

In the early-to-mid-‘70s, RONNIE briefly reformed THE RONETTES with two new members, but the group was widely perceived as an oldies act and not taken seriously.  BILLY JOEL’s 1976 hit, “Say Goodbye To Hollywood,” was also inspired by RONNIE, who covered it in 1977, backed by BRUCE SPRINGSTEEN’s E-STREET BAND, who remained big fans and supporters.  That same year, she sang a duet with SOUTHSIDE JOHNNY on “You Mean So Much To Me,” written by SPRINGSTEEN and produced by VAN ZANDT, as the final track on SOUTHSIDE JOHNNY AND THE ASBURY JUKES’ debut album, “I Don’t Want To Go Home.”

In 1980, she recorded her first solo album, “Siren,” produced by GENYA RAVAN, a prelude to her work with JOEY RAMONE, another big fan who cited her as an influence.  In 1983, RONNIE and the rest of the RONETTES sued PHIL SPECTOR for non-payment of royalties, eventually winning a $3 million judgment in 2003, establishing the group’s 1963 contract as binding.

RONNIE’s 1986 duet with EDDIE MONEY, “Take Me Home Tonight,” peaked at #4 on the BILLBOARD HOT 100, where it remained for 23 weeks and was nominated for a GRAMMY AWARD.  The accompanying music video was one of the most popular on MTV. That same year, she recorded “Tonight You’re Mine, Baby,” for the film “Just One Of The Guys.” In 1987, she released the solo album, “Unfinished Business,” followed three years later, in 1990, by her autobiography, “Be My Baby: How I Survived Mascara, Miniskirts And Madness,” co-written by VINCE WALDRON, with an introduction by BILLY JOEL and a foreword by CHER.

In 1999, RONNIE released the critically acclaimed five-track EP, “She Talks To Rainbows,” which featured covers of JOHNNY THUNDERS’ “You Can’t Put Your Arms Around A Memory,” THE BEACH BOYS’ “Don’t Worry Baby,” ELLIE GREENWICH, JEFF BARRY and PHIL SPECTOR’s “I Wish I Never Saw The Sunshine” and a duet with JOEY RAMONE, “Bye Bye Baby.” RAMONE, who also wrote the title track, produced the record with DANIEL REY, and made several live appearances with RONNIE to promote it.

In JUNE, 2000, after an elongated legal battle, RONNIE won a landmark decision in the NEW YORK STATE courts, easing the way for veteran artists of the ‘50s and ‘60s to collect past-due royalties on their old recordings.

RONNIE’s album, “Last Of The Rock Stars” was released by BAD GIRL RECORDS in 2009, marking the first time she was in full control of her material, arrangements and production.   Her collaborators included YEAH YEAH YEAHS’ NICK ZINNER, THE RACONTEURS, THE DEAD WEATHER, PATTI SMITH and KEITH RICHARDS, with RONNIE producing two of the tracks.

“RONNIE SPECTOR’s Best CHRISTMAS Ever,” featuring all-new holiday songs came out in NOVEMBER, 2010. The following year, her cover of AMY WINEHOUSE’s “Back To Black” was named Single Of The Month by MOJO MAGAZINE and in MAY, she appeared with LOU REED, MACY GRAY, DR. JOHN and STEELY DAN’s DONALD FAGEN in a benefit for the JAZZ FOUNDATION OF AMERICA at HARLEM’s fabled APOLLO THEATER, where she made her own performing debut at age 11, then headlined with THE RONETTES in 1965.   Later that year, she appeared at LONDON’s ROYAL FESTIVAL HALL for the MELTDOWN FESTIVAL, curated by THE KINKS’ RAY DAVIES.

In 2012, RONNIE debuted her biographical, one-woman, multi-media show, “Beyond The Beehive,” in NEW YORK CITY, taking the show to LONDON and LOS ANGELES.

In 2014, SONY LEGACY released “The Very Best Of RONNIE SPECTOR,” the first-ever cross-label collection of her career, a 14-track DC which included her hits with THE RONETTES as well as a solo artist.

In early 2016, RONNIE released “English Heart,” her take on songs from the ‘60s BRITISH Invasion, including THE KINKS’ “Tired Of Waiting,” THE ANIMALS’ “Don’t Let Me Be Misunderstood,” THE BEATLES’ “I’ll Follow The Sun,” THE BEE GEES’ “How Can You Mend A Broken Heart” and GERRY AND THE PACEMAKERS’ “Don’t Let The Sun Catch You Crying.” The first single was a cover of THE ROLLING STONES’ “I’d Much Rather Be With The Girls.”  It was her first album of new material since 2009.

RONNIE is survived by her husband, JONATHAN GREENFIELD, their two sons, AUSTIN DREW and JASON CHARLES, and her three adopted sons, DONTE, LOUIS and GARY PHILLIP, from her marriage to PHIL SPECTOR.

The family requested, “In lieu of flowers, RONNIE requested that donations be made to your local women’s shelter or to the AMERICAN INDIAN COLLEGE FUND. A celebration of RONNIE’s life and music will be announced in the future. The family respectfully asks for privacy at this time.”