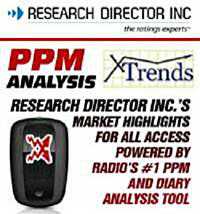 
If you remember the 21st night of SEPTEMBER, then you are well aware that it fell outside of this survey’s parameters. The Ratings Experts from RESEARCH DIRECTOR, INC. – in close cooperation with the numbers crunchers from XTRENDS – are nothing if not precise. The book in question began on AUGUST 19th and ended on SEPTEMBER 15th. So the song in question was referring to the OCTOBER survey. Just like to keep things straight. This one featured a long holiday weekend and the resumption of both high school hijinks and football follies. It unfolded thusly:

KISW had its lowest 25-54 share since JANUARY but still led the way for the eighth straight survey. KUOW repeated at #2 with a slight increase yet was still about a share off the lead. HUBBARD Top 40/M KQMV (MOVIN’ 92.5) remained at #3 with the smallest increase, but it had company. FRIENDS OF KEXP Alternative KEXP forged the tie as it launched itself from #12, thanks to a massive share increase. iHEARTMEDIA Top 40/M KBKS (HITS 106.1) slipped to #5 with its lowest mark since APRIL. KIRO was off slightly, but that was enough to push it down into a three-way tie at #6 with KJR and KOMO-A.

KISW had its best 18-34 outing since MARCH as it held on to the top spot. KQMV got back some of last month’s large share loss to repeat at #2 but was about a share and a half in arrears. KZOK inched up to #3 despite a slight loss, while two stations collided at #4. KIRO stepped up from #5 with a tiny loss, while KBKS dipped from #3 with its lowest total since MARCH. AUDACY Alternative KNDD (107.7 THE END) remained at #6 but had to make room for two stations that were on a mission. AUDACY Country KKWF (100.7 THE WOLF) was up from a tie at #10 as it rebounded from a down book, while KEXP advanced from a tie at #12 as it ended a steep four-book slide.

This was the fifth consecutive 18-49 win for KISW. However, its three-book double-digit streak came to an end. Still, it led KQMV, which stepped up to #2 with a slight increase, by about two and a half shares. KUOW was off slightly as it slipped to #3, while KEXP leapt from #8 to #4 with a huge share gain. KIRO remained at #5 but with its best outing in over a year. It just edged out KBKS, which slipped to #6 with a slight decrease.

That WHQT was #1 25-54 came as no surprise. After all, this was the ninth book in a row this happened. However, the station did crack the double-digit barrier in the process and led #2 WLYF, which ended a three-book surge, by almost four shares. SBS Tropical WXDJ (EL ZOL 106.7 FM) moved up to #3 with a slight increase, while WFEZ was up to #4 as it bounced back from a down book. A flat AUDACY Classic Hits WMXJ (102.7 THE BEACH) remained at #5 but was forced to share as iHEARTMEDIA Top 40/M WHYI (Y100) dropped down from #3 as it ended a robust two-book surge.

WHQT repeated as the 18-34 leader though it was off a bit. It was still the dominant player even though COX MEDIA Urban WEDR (99 JAMZ) leapt from a tie at #7 to #2 with its highest score in over a year. The gap between the two stations stood at about a share and a half. WMXJ ended a two-book surge as it slipped to #3 and into a tie with WFEZ, which advanced from #5 as it halted a two-book slide. AUDACY Country WKIS (KISS COUNTRY 99.9) had its highest mark since DECEMBER as it rose from a tie at #10 to #6. WHYI fell from #4 and into a tie at #8 with WXDJ.

The top four 18-49 stations were as we last saw them. WHQT won the demo for the ninth straight survey and came dangerously close to hitting double digits. WLYF repeated at #2 but with its lowest share since MAY, while WXDJ remained at #3 with a slight decrease. A flat WFEZ was at #4 again, while WEDR moved up three slots to #5 with a large increase. WMXJ and WHYI had been tied at #5. WMXJ was up slightly but slipped to #6, while WHYI fell to #8 with its lowest number since APRIL.

DETROIT: The Classic One, Two

It’s been a while since a station other than BEASLEY Active Rock WRIF was #1 25-54. In fact, the station was #1 for the last eight surveys. It slipped to #3 with its lowest score in over a year, which paved the way for two stations to move up in the rankings. WCSX made it to #1 with its highest share in over a year, while a flat WOMC stepped up to #2. The two were less than a half share apart. WXYT was up for the third book in a row as it moved up a couple of spaces to #4. Two stations advanced to hold sway at #5. iHEARTMEDIA Urban WJLB was up from #8 as it bounced back from a down book, while WMXD turned it up from #11 with its best performance since MARCH. WDVD slipped three places to #7 as it ended a robust six-book surge. iHEARTMEDIA Top 40/M WKQI (CHANNEL 955) dropped from #5 to #10 and was tied with AUDACY Country WYCD.

There was a ton of movement among the 18-34 ranks. WJLB was off slightly but elevated itself to the #1 position after a two-book layoff. WRIF stepped up to #2 despite a slight loss, while two stations advanced to form a bond at #3. WOMC was up from #5 despite a slight decrease, while BEASLEY Rhythmic AC WMGC (105.1 THE BOUNCE) pogoed up from #9 with its biggest share in over a year. WDVD was up three places to #5 with its best showing since FEBRUARY. Three stations were languishing at #6. Two of those dropped out of the top five. WYCD was #1 in two of the last three surveys but fell, thanks to its lowest share since FEBRUARY. WCSX dropped from a tie at #3 with its lowest score since MARCH, while a flat WKQI remained motionless.

The top three 18-49 stations were separated by a half share. A flat WJLB moved up to #1 and just nipped a flat WOMC, which was up to #2. WRIF slid to #3 with its lowest mark in exactly one year. This also halted the station’s eight-book winning streak. WDVD repeated at #4 with its best performance in over a year, while WMGC advanced from a tie at #9 to #5 as it regained all of last month’s lost share. WMXD was up five places to #6 with its highest mark since MARCH, while WCSX dropped from #5 to #8.

A flat KESZ was #1 25-54 for the fourth book in a row but was hearing footsteps. KUPD moved up to a very close #2, thanks to its best showing in over a year. KYOT was up to a very solid #3 with its highest share in exactly one year, while KOOL dropped to #4 with its second down book in a row. Two stations advanced to form a partnership at #5. A flat iHEARTMEDIA Hot AC KMXP (MIX 96.9) was up from #7, while ENTRAVISION Regional Mexican KLNZ (LA TRICOLOR 103.5) jumped from #9 as it rebounded from a three-book down streak. KNIX and ENTRAVISION Spanish Adult Hits KVVA (LA SUAVECITA 106.9/107.1) had been tied at #5. KNIX dipped to #7 with its lowest score in over a year and was tied with KSLX. KVVA fell to #14 as it returned all of last month’s large increase.

There was a lot to unpack with the 18-34 demo. First, seven stations were jammed into the top five. Second, KYOT reached the summit of the demo as it rose from #5 with a massive share increase – easily its best book in over a year. iHEARTMEDIA Top 40/M KZZP (104.7 KISS FM) had been co-leader last month. This time it slipped to #2 despite landing its largest share in over a year. It was paired with KUPD, which moved up from a tie at #3, also with its best outing in over a year. These three stations were very, very close to each other and were far ahead of the rest of the pack. DESERT VALLEY Top 40/R KKFR (POWER 98.3 & 96.1) moved up to #4 with its third up book in a row. There were three stations congregating at #5. Last month’s other co-leader was KESZ, and it dropped into this tangle as it returned most of last month’s massive share increase. KOOL slipped from a tie at #3 as it ended a strong two-book surge. AUDACY Top 40/M KALV (LIVE 101.5 FM) was up from a tie at #6 with a small increase.

The top five 18-49 players were essentially the same, but they rearranged the deck chairs. KUPD rose to #1. It just nipped KYOT, which was up two places to #2. Both stations posted their largest shares in over a year. KESZ was still in the hunt, though it slipped to #3 with its lowest score since MAY. KZZP was up to #4 with its highest total since NOVEMBER, while KOOL slid three spaces to #5. KNIX dropped from a tie at #5 into a tie at #9 with UNIVISION Regional Mexican KHOT (QUÉ BUENA 105.9).

MINNEAPOLIS-ST. PAUL: How Kool Is That

KSTP had its best 25-54 book in over a year as it landed at #1 for the seventh straight survey. It led CUMULUS Active Rock KXXR (93X), which moved up to #2 with its highest score since MAY, by better than two shares. KQQL was up two places to #3 as it ended a somewhat steep two-book slide. KTIS dipped to #4 despite a slight increase, while KNOW went from #7 to #5 with its highest total since APRIL. KZJK dropped from #2 to #6 as it returned all of last month’s solid increase.

Based on the numbers, you would’ve thought KQQL was pa-rum-pa-pum-pumming a bit early. The station zoomed to #1 18-34 and slammed through the double-digit barrier in the process. KXXR was up from #7 to #2. The station has more than doubled its share over the last two surveys yet was still about two shares off the lead. KSTP ended its two-book winning streak as it slid to #3 with its smallest share since JANUARY. iHEARTMEDIA Top 40/M KDWB stepped down to #4, while iHEARTMEDIA Hot AC KTCZ (CITIES 97.1) repeated at #5. It was just ahead of KNOW, which advanced to #6 with its largest share in over a year. KEEY fell from #4 to #7.

The 18-49 arena continued to be the playground for KSTP. The station was #1 for the eighth book in a row and in double digits for the sixth time during that span. KQQL and KXXR had been tied at #3. Both stations had solid increases, but the tie was broken as they landed at #2 and #3, respectively. KDWB slid to #4 with its lowest total since MARCH, while two stations advanced to form a tie at #5. KNOW was up from #8, while KTCZ stepped up from #9. KNOW had its best book since APRIL, while KTCZ was at its highest point in over a year. KZJK fell from #5 to #9.

SEPTEMBER has ended. You can wake up now. Thank you for plowing through this with us. The Ratings Experts from RESEARCH DIRECTOR, INC. will be back in about 28 days to fully explore the OCTOBER survey. Until then, stay safe.