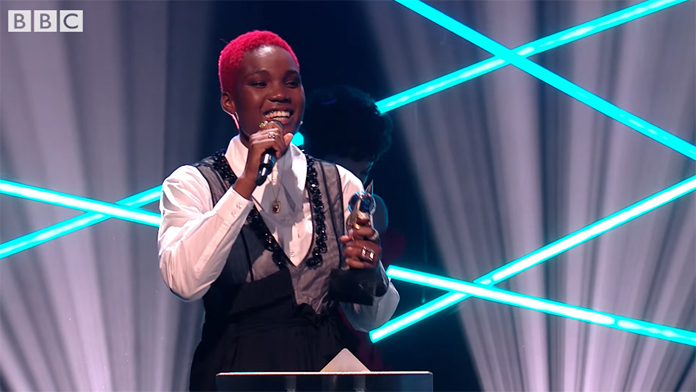 London-based singer Arlo Parks has won the 2021 Mercury Prize for her debut album, Collapsed in Sunbeams, released back in January via Transgressive. Watch her accept the award and perform the album’s “Too Good” at the ceremony tonight. The BBC have also shared ceremony performances from other nominees, including Wolf Alice; Mogwai; Black Country, New Road; and Laura Mvula. Watch it all below.

Since 1992 the Mercury Prize has been awarded to the best British album of the year, meaning an album created by a citizen of the U.K. and Ireland. It’s become one of the biggest honors a British musician can receive and can also boost an album’s sales in the U.K., especially if it wins.

Michael Kiwanuka won last year. British rapper Dave won in 2019. Wolf Alice previously won in 2018 for their sophomore album Visions of a Life. In 2017 Sampha won, the year before it was Skepta, and the year before that it was Benjamin Clementine. The Mercury Prize started out strong with Primal Scream’s Screamadelica winning in 1992 and Suede’s self-titled debut winning in 1993. There have been lots of great artists who have also won since, including Pulp, Elbow, Portishead, Franz Ferdinand, and others. Although they don’t always get it right and there have been some forgettable winners as well. PJ Harvey is the only artist to win the Mercury Prize twice.

Read our review of Collapsed in Sunbeams here.

Pick up our current print issue (Issue 68) to read our interview with Parks about the album.

Parks had this to say about the album in a previous press release: “My album is a series of vignettes and intimate portraits surrounding my adolescence and the people that shaped it. It is rooted in storytelling and nostalgia—I want it to feel both universal and hyper specific.”