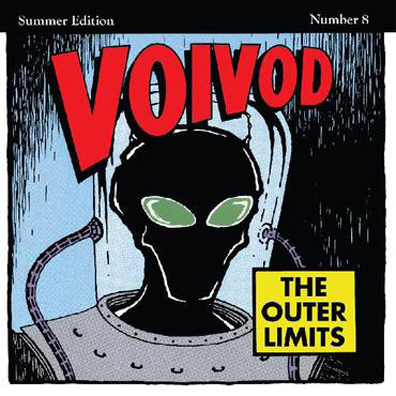 In 1993, the long-running Canadian thrash/prog metal force of nature known as Voivod, already a band for a little more than a decade at that point and with such acclaimed albums as 1988’s Dimension Hatross and 1989’s Nothingface already under their belts, were definitely in a transitional period. Their original bassist Blacky had left after their previous album, 1991’s massively underrated Angel Rat, perhaps the closest realization of a slightly more metallic/heavier Swervedriver that’s ever been recorded. While the album alienated some of their earlier fans used to more tricky time signatures, it was also a prelude of what was to come for 1993’s The Outer Limits.

It should also be noted that this is the last Voivod album to feature vocalist Dennis Bélanger until his return to the group in 2002 and that this is the only Voivod album with session bassist Pierre St. Jean. Despite this, The Outer Limits (like Angel Rat) is a focused, if more stream-lined, effort than much of their prior work. The centerpiece is the 18-minute “Jack Luminous,” a multi-part prog epic that opens side two along with the side one opener “Fix My Heart” and a cover of Pink Floyd’s “The Nile Song,” further illustrating the influence that the early Pink Floyd had on them as they had previously covered “Astronomy Domine” on the aforementioned Nothingface.

This reissue, the first time it’s been on vinyl since its 1993 release and initially only in Europe and now thus very rare and expensive, is long overdue and looks beautiful, the first press being on blue/black swirl colored vinyl and the second press being on “red/black smoke.” While one could complain that it should have been a double LP given that the album is 54-minutes long, this is the only possible complaint this writer could levy against this otherwise wonderfully done reissue. (www.voivod.com)