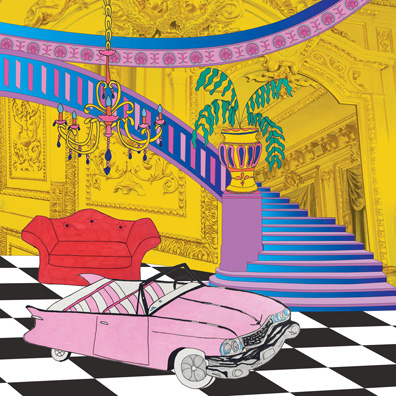 In the age of streaming, the EP still has its place for emerging artists who are not quite debut album ready. EPs certainly tend to generate more press than a standard single and from a campaign perspective provide more bang for the buck. South African collective Honeymoan, as with previous releases, stick to the original spirit of the EP by releasing four new songs rather than padding a press campaign out with a plethora of unnecessary remixes.

Before the pandemic, the band had released two well-received collections, the Body and Weirdo EPs respectively, which showcased their ear for driving indie electronica with a distinct pop edge. With their latest offering, the Palace EP, the band finesse their sound further and whilst not everything comes off, when they do hit the mark they prove themselves to be a group who can write intelligent, relatable, danceable, and literate pop.

The EP opens with the ostensibly jaunty “Super Emotional,” a track that’s all about trying to figure out who you are and find your place in the world. It’s a perfectly well-executed slice of pop music, although it doesn’t quite grab you by the collar and spin you around the dancefloor in the way previous Honeymoan releases have. “Club Dread” is a much more satisfying affair—dark, slinky, and sophisticated with a vaguely sinister undercurrent, and if you use your imagination it could land you somewhere between Lana Del Rey (minus the narcotic ennui) and a poppier Portishead.

Nothing quite reaches the heights of the superb “False Idols” and, as on their Weirdo EP with “Too Much,” this is where Honeymoan really do excel. Singer Alison Rachel says in the press materials that, “‘False Idols’ is a triumphant story of success, a message to anyone who ever said you couldn’t do it, you were too young, too old, too scared, too whatever, but you did it anyway and look at you now.”

It’s when Honeymoan combine propulsive electronica with driving guitars and soaring euphoric hooks that they deliver the pop mother load. After the serotonin rush of “False Idols,” anything else is going to be an anticlimax and EP closer “Tragedy of the Commons” certainly throttles back the pace, whilst thematically, as the title alludes, touches on sharing resources and the dangers of overconsumption. Generally, it’s a well-balanced collection of tracks although nothing quite slaps like “False Idols.” (www.honeymoanband.com)