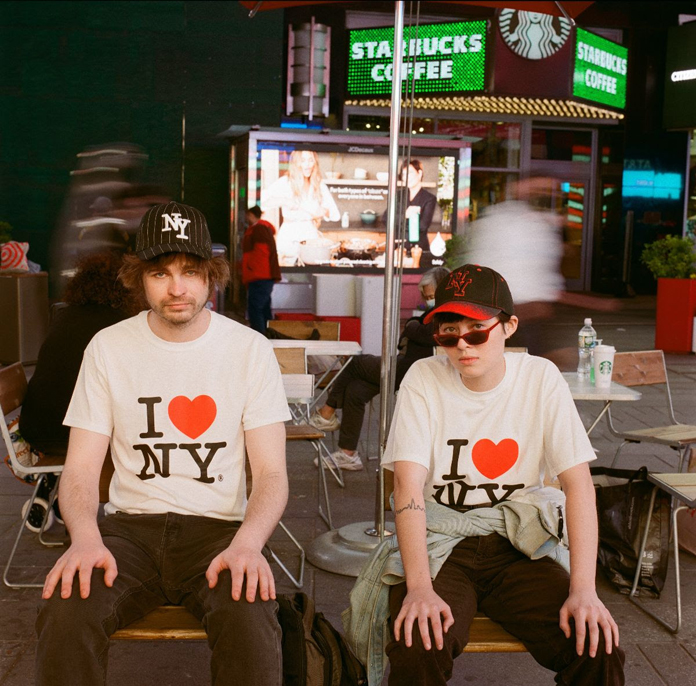 Water From Your Eyes on “Structure”

Water From Your Eyes is the offbeat Brooklyn-based pop project of longtime musical collaborators and former partners Nate Amos and Rachel Brown. Pointing out these two different relationships between two closely attuned artists seems more relevant here than with most musical affairs. Amos and Brown seem to take special delight in allowing their music to exist within a schism: whether that schism exists between reality and fiction, chaos and concept or empathy and apathy is all up to you to discover.

One of Water From Your Eyes’ signature traits is how they often put two versions of the same song on their records. In the case of their newest long player Structure, that song happens to be ““Quotations”” and its bizarro sibling “Quotations” (without the actual quotation marks): one version adapting an almost technicolor rainbow bridge sensibility, the other sounding like Stereolab and Deerhoof on a meth binge together, splurging with shards of noise like a child having a playful hissy fit. Though both versions have different sonic executions, they are both decisively light and cartoonish in terms of expression. It’s as if Brown and Amos are tugging at the same creative rope just to test its resilience and malleability.

According to Amos, a big inspiration whilst making Structure was Scott Walker’s Climate of Hunter. Not per se in terms of sonic influences, but more in its creative disposition. During that album’s recording sessions, Walker was adamant to keep his session players in the dark by not recording demos and giving them nothing to fall back on. In that way, the music that would unfold could exist in a “concentrated place” where no individual’s contribution could haunt the end result too much.

“I guess I always loved the way Climate of Hunter is put together,” Amos denotes. “I mean, all his later work had a significant impact on me as well, Tilt in particular. But Climate of Hunter is technically the only Scott Walker release in-between—discounting the cover albums that he did—Scott 4 and Tilt. So that album is kind of a weird link of hearing him homing in on the same themes he’s working with. He said he had just been writing the same songs over and over again.” Climate of Hunter too exists in a schism, being released between Scott Walker’s baroque pop period and his avant-gardist later works, the exact point of some radical shift.

Structure leaves the listener scrambling in similarly discombobulating fashion, especially stylistically. Cinematic chamber pop in the vein of Burt Bacharach (“When You’re Around”) somehow coexists with the manic industrial forays of “Track Five” (whose title is also “a nod” to Scott Walker’s Climate of Hunter, according to Amos). It feels as no coincidence the album was recorded in the wake of Amos and Brown’s breakup. Fascinatingly enough, Structure is divided into two separate halves that loosely mirror each other. Each side starts with a deft pop number, an unruly noise pop outing, a cryptic spoken word segment by Brown, and wrapping up with a version of “Quotations.”

In-between the seams, however, you can sense a lot of volatile, erratic energies that coalesce like a still solidifying thread mark forming between two severed parts of a heart. Music used as dispassionately as you would a tool: cut away the personal baggage like excessive fat, and make way for a spirited, unified abstraction. “This album was different because it began to take shape before any type of intentional thought,” Amos comments. “By the time we were figuring out what to make next, there was already this blurry thing we could work off of.”

“It’s us being personal together,” Brown chimes in. “I write extremely personal music where Nate has no say in it. What we were writing together was still coming from our own experiences, but we would just edit them a bit. At least when it comes to the lyrics. Musically, I think Nate has an ear for knowing when it’s going to be a song for the band vs. something that works as its own thing.”

Although Brown (who uses they/them pronouns) feels their music has this personal element, the Water From Your Eyes project compels both Brown and Amos to seek sometimes outrageous entry points to break the writing process open in novel fashion. “We did set out to become a sad dance band,” Brown halfheartedly jokes. Only a sad dance band that avidly wrote songs from the perspective of movie characters or animals in grave peril, almost as a wacky way to give the songs a sense of surrealism. This sounds maybe a bit art school-level high brow, but both Brown and Amos speak with an ennui that belies their shrewdness: as if they consider their own music an independent living entity untethered from their own respective agendas. It feels significant to highlight that Water From Your Eyes started as a long-distance endeavor: Brown was still living in Chicago, and Amos in Brooklyn. The two different renditions of “Quotations”— interestingly enough—have a cyclical quality in their repetition-based arrangements, gyrating between distance and closeness, a constant of reassessment of a relationship coming around the bend.

Composing songs for Structure, ironically, starts with the feeding of chaos. Converting Mark Rothko-paintings into sound files or recording a surprisingly faithful covers album are run-of-the-mill exercises in the strange pocket universe that is Water From Your Eyes. “There’s a lot of tinkering,” Amos explains. “Many of these songs started as giant 8-minute long blocks of sound, with everything in there all the time. Then you delve into this process of chipping things away. You create chaos, and from that point it becomes a process of carving and editing. And just instinct. Then the melodies begin to emerge in a blocky way, then we sit together and map out how much lyrical content we use.” That sense of pragmatic remove seems at least somewhat comparable to Steely Dan, only without the virtuoso chops. Water From Your Eyes do brandish a similar knack for setting uncommon conditions for their songwriting. With so much technology at one’s fingertips to make music nowadays, it never hurts to go that extra mile to find that uncanny zone.

“Yeah, I think so. I don’t think about it intentionally—as in exploring a different thing—but yeah, I think that’s a fair assessment,” Amos reacts. “It’s funny because I never really thought of my relationship with Rachel in a ‘Steely Dan’ sort of way. In terms of the Steely Dan-thing, they definitely have this sort of separation, something in-between them and the rest of the world. A bunch of elements that only they will be able to understand fully. I think Countdown to Ecstasy is the one I listen to the most. Aja is of course a masterpiece. I actually really like Gaucho a lot…. I wouldn’t say I’ve gotten into arguments about this, but I have gotten into some intense debates with people saying that album was a significant step down. It’s a really weird sleazy album…. I feel it’s them at their most obsessive.”

Brown and Amos both harness a heightened sense of inquisitiveness in figuring out what makes certain records tick, and applying that knowledge within their own idiosyncratic wavelength. It’s a chameleon-like trait they share with fellow Brooklynite scene-dweller Lily Konigsberg, with whom Amos has formed yet another project called My Idea. With all that creativity running unchecked, you need to set a certain set of structures—or a “sense of identity” as Amos puts it—to make deliberate choices where the surplus ideas will exactly end up. Amos: “It’s not so much of a choice anymore whether something is a Water From Your Eyes song or not.”

Brown explains how living space has also influenced the way the project refined the conditions in which the music is conceived. Working on the album became synonymous to just hanging out together again and vice versa. “I guess we needed time and distance to figure out what this project is.” “When You’re Around” is the only song on Structure that was written when Brown was still living together with Amos.

That idea of expressing a functional separation between living together vs. working together also pops up on “My Love’s,” which uses the feedback as a melodic hook in this frenetic way. Where some song ideas are sparked by the feeding of chaos, this is actually a track that encases chaos in a useful, and strangely catchy way. “I was writing in this period of time when I was stuck in this hotel because there was mercury poisoning in my apartment building for some reason,” Amos explains. “I got kicked out of my apartment essentially. The original melody remained the same but the way the music was framed was different, the tone entirely different from the way that song was originally intended. Then it was abandoned for a while. I think I took the bass line from that song and I turned it into that kind of string-pluck melody that comes in and out. Once that was there, that was the moment when I knew there was something to chase.”

In many ways, the process surrounding Structure revolved around giving undefined things their designated place to exist: whether it’s a fading relationship turning back into deep friendship or a melody that has lingered and transposed into a different sonic component. Even the name Water From Your Eyes explains sadness in this super stark, cerebral way, and the album artwork for Structure similarly pits an amorphous vaguely human-shaped blob on a collision course with a geometric shape.

Though we tend to celebrate pop music for its potential emotional bandwidth, Water From Your Eyes seems perfectly fine muddying the waters and leaving space for others to try and bring their music into focus. “I feel like our songs aren’t necessarily stories, more like different sensations,” Brown comments.

“This might sound a bit dull,” Amos concludes. “But there’s this Mitch Hedberg joke that all the Bigfoot-photos are actually in focus. I kind of think of Structure as a high-def photo of something that’s blurry in real life.”