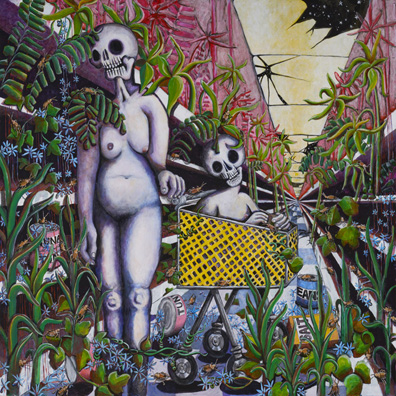 Any Shape You Take

The last show I saw before the world came crashing down was at Deluxx Fluxx in Detroit, Michigan. Standing front stage with a guitar in hand was indie rocker Indigo De Souza. About half her body was donned with thigh-high, fringe UGG boots (this was a cool January night, mind you), while her top sported a white, paint-splattered T-shirt dress. About halfway through De Souza’s set, she sets her guitar down, closes her eyes, and waits for the dum, dum, dum, dum, strum of the bass to count her in. What she doesn’t realize, though, is the crowd is right there with her, counting beats, anticipating. Together, De Souza and Detroit sing “Home Team.”

“I don’t like fucking boys who need to know what to say/When there’s silence in the room.”

Instantly, De Souza’s eyes open, her jaw drops, but the crowd keeps singing. You can even hear her giggle incredulously into the mic.“I get so nervous when people know my lyrics,” she admits as the song closes.

The singer’s 2018 debut, I Love My Mom, was a sort of dark horse. It wasn’t until a year or so after it’s release that people really started paying attention. Despite the title, I Love My Mom is not a happy album. It’s a garage pop hurricane, drizzling gently with sweet melodies and funky basslines. That is, until the floodgates come crashing open with a full band. This is De Souza’s habitude: music wavering in intensity, typically at the discretion of her croaking plea. No matter how impressive her hooks are, it is her explosive vocal deliveries, her borderline screech of coquettish, crude, but highly addictive poetry, that is a marvel of puissance, and originality. Listen, if it’s the end of the world, De Souza isn’t going to sugarcoat it—she’ll just sing along. She deals with life’s bullshit—grief, heartbreak, loneliness—with a lyrical vigilance and candor that allows listeners to grab on; to scream along.

And Any Shape You Take is no different. According to De Souza, I Love My Mom and Any Shape are companion pieces, both written around the same time, about the same love affair. While the two albums seem to be beating to a similar drum, Any Shape You Take makes a concerted effort to clean-up the messes left behind and unfinished in 2018.

Now backed by Saddle Creek (Big Thief, Bright Eyes), De Souza was able to veer in some unusual directions. Although rock ‘n’ roll as hell, De Souza’s influences are really all over the map. You can hear Elliott Smith’s subtle vulnerability in her voice, Arthur Russell’s avant-pop music structures, Regina Spektor’s sarcasm, and even a hint of Frank Ocean’s atmospheric textures. With additional help from Brad Cook, producer for Bon Iver and Waxahatchee, De Souza recorded her new tunes in Betty, the studio owned by none other than fellow NC residents (and pop legends) Sylvan Esso. Here, De Souza experimented with just an arm and a synth more, really leaning into her pop proclivities without ever settling into one, distinctive genre or striving too far from what felt true to herself. Ultimately, the results are a much more fluid record. Both De Souza and the music “bend,” allowing her to emerge as a more flexible, wiser narrator.

The album kicks off with new-old track “17,” previously only available on Audiotree (as is later song “Bad Dream.”) Unlike her live set, De Souza’s vocals are pitch-adjusted, layered, trickling over smiling synths that eventually lets a drum machine pick up the pace. It’s an experimental opening that feels both refreshing and familiar. Really, it’s a preface for what’s to come: “This is the way I’m going to bend, now that the baby’s gone,” she sings. As we get older—or make more music—our ideas shift.

“Real Pain,” for example, is a three-part act of self-realization. “When love is real, you cannot hide,” she sings as pummeling drums expand their wings into a full percussion breakdown. But, she “still feels you,” she sings of both her “real pain” and her “real love.” The music slows down as she “doesn’t believe the way I’m going,” and then culminates into just one, pounding kick drum and a collage of voice-memo screams sent to her by fans. As the yelling grows in decibels, De Souza suddenly halts them, and then comes back with a third, indie-pop proper, section. On I Love My Mom opener De Souza sings “I need to be kicked, maybe, fucked, maybe, told I’m in the way,” but in the finale of “Real Pain” she does the kicking. “I wanna kick, wanna scream, wanna know it’s not my fault,” she sings as the full band comes together in a power-chord driven vamp.

A lot of tracks on Any Shape seem to revise previous notions from I Love My Mom. In some ways, her personality is less visible this go around. While I Love My Mom had De Souza’s “tits ghosting on you”and demanded listeners to “TAKE OFF UR PANTS,” Any Shape is less wry, more meditative. Less colloquial, more abstract. Really where the two albums diverge is at I Love My Mom’s self-degradation and martyrdom in the name of love. These themes are not totally lost (“I’d rather die than see you cry” she sings on “Die/Cry”) but instead become more nuanced as De Souza uses her catchy hooks and explosive instrumentation to reassess her attitude, to reel in her spite, and do something about her fraught relationship. In “Pretty Pictures”—a song that sounds like “400 Lux” by Lorde if it were guitar-based—she realizes time is finally up. “I just can’t lie to myself…it doesn’t feel like things will get better,” she admits. On the rocky groove “Way Out,” De Souza decides she “wants to be a light,” but knows it’s up to both her and her lover to change. If they choose to do so, she’ll be there “to love you/to hold you through the pain/no matter what shape you might take.” It’s as if De Souza’s two albums are looking at each other through a plexi-glass mirror: if it wasn’t for Any Shape’s scratches, wrinkles, and the slight color behind her cheeks—you might think they were the same.

Any Shape You Take finds De Souza in flux with her emotions and at odds with her old self, but there is a purposeful messiness about the album, a true sincerity within her severity, that is distinctly seminal. Whether it’s her croaking cadence, neo-soul tinges (“Hold U”), or start-stop fakeouts (“Way Out”), De Souza charges through Any Shape with an intensity that grabs you by the throat, squeezing out every drop of your humanity. (www.indigodesouza.com)