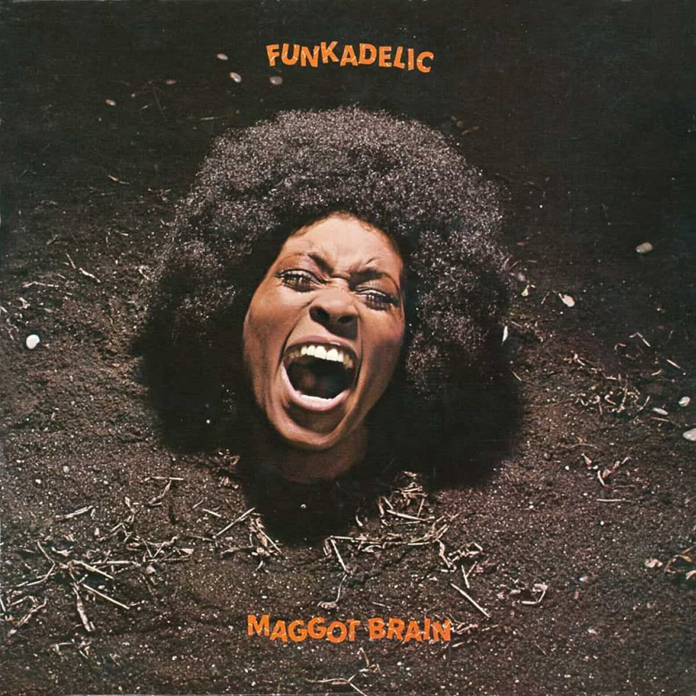 Funkadelic – Reflecting on the 50th Anniversary of “Maggot Brain”

Released on July 12, 1971, Funkadelic’s controversial masterpiece—a screaming Barbara Cheeseborough buried up to her neck gracing its front cover—emerged as a brilliant, albeit morbid experiment in funk-driven psychedelia. Aptly titled Maggot Brain, the album’s grim sense of humor can first be glimpsed in its liner notes—a full length essay on the topic of fear, provided by notorious quasi-satanic religious cult The Process Church of the Final Judgement. However, what Maggot Brain ultimately offers is not only a bizarre satire of a diseased nation on the verge of implosion, but also a sincere plea for said nation to further seek a remedy for its ailment.

While faring relatively well on the U.S. R&B charts upon its release, the raw intensity of the Detroit funk group’s third album was greeted with even amounts of enthusiasm and repulsion, with Rolling Stone’s Vince Aletti inquiring of his readers, “Who needs this shit?”

Saturated in the delirious grit and grime of urban America in the early ’70s, Clinton opens Side A with a reverberated monologue, stating, “Mother Earth is pregnant for the third time/For y’all have knocked her up.”

From there, the remainder of the sprawling 10 minute and 21 second title track is carried by Eddie Hazel’s wailing electric guitar. Tripping on LSD while recording, Hazel was said to have been instructed by Clinton to play as though he had found out that his mother was dead. Through anguish and hope, Hazel’s behemoth solo is eventually met by Clinton’s low command, “Go on, Maggot Brain.” The moniker in question, as alleged by critics and fans of the album, can either be attributed to Hazel himself, merely a nickname bestowed upon him by the rest of the group, or to the busted head of Clinton’s brother, whose decaying corpse had been discovered in a Chicago apartment.

A record such as Maggot Brain could only have been a product of its era, as demonstrated on the album’s second track, the freak folky “Can You Get to That.” The acoustic, gospel-tinged jam balances the prevalent weirdness of Maggot Brain’s current decade with the optimistic lightness of the recently deceased ’60s. Complete with vocal harmonies provided by Hot Buttered Soul—the backing group of Isaac Hayes—“Can You Get to That” tends to feel more accessible to the casual listener, as opposed to the album’s heavier cuts. The song was even sampled by Sleigh Bells on the Brooklyn noise pop duo’s 2010 song, “Rill Rill.”

Fan favorite “Hit It and Quit It” features keyboardist Bernie Worrell’s Sunday service-style organ, which is eventually paired with the scream of Hazel’s winding guitar solo. The action unfolds against a backdrop of harmonized “da-da-da-do’s,” one of the album’s handful of features indicative of Funkadelic’s origins as New Jersey doo wop outfit The Parliaments.

Elsewhere, the class-conscious “You and Your Folks, Me and My Folks” is an urgent anthem of class consciousness, a call for unity among the underfed. Referencing a traditional folk rhyme, bassist William “Billy Bass” Nelson declares, “Me and my folks/Love you and your folks/If there ever was folks/That ever, ever was poor.” Led by a lopsided piano melody and underscored by a chorus of “yeah, yeah, yeah’s,” “Me and My Folks” is one of Maggot Brain’s most mesmerizing tracks, as well as that which addresses the album’s predominant concerns in the clearest manner possible for an early Funkadelic record.

Eddie Hazel’s exhilerating Hendrix tribute, “Super Stupid” roars with demonic energy as Hazel bemaons the careless misadenvture of a foolish junkie, “Super Stupid bought a nickel bag/Thought it was coke, but it was skag.” Complemented by Hazel’s bluesy vocals, this vicious rocker stands proudly among Funkadelic’s heaviest—the ideal synthesis of guitar rock and funk, a sound worthy of that of his late idol, whose early death had occurred less than one year prior. “Super Stupid” also features a lyrical reference to the album’s elusive title, Hazel singing, “So stupid with your ups and downs/Your maggot brain, your grins and frowns.”

The mighty force of “Super Stupid” preceeds the brief, often overlooked “Back in Our Minds,” which serves as something of a comedown from the surrounding chaos. A pleasant declaration of peace, the track is dominated by bouncing jaw harp, adding an expected peculiarity to the otherwise easygoing number, before eventually giving way to a charming horn section and transitioning to the final track.

The album’s apocalyptic conclusion “Wars of Armageddon” is essentially George Clinton’s “Revolution 9.” An epic collage of melody and sound effects, the chaotic energy of Maggot Brain crashes down in the form of a nine-minute jam session during which Hazel shines once more and Worrell remains in step on his organ. Peppered with sounds of utter madness, from the crying of a baby to the racket of barnyard animals, the chiming of a cuckoo clock, militant chanting, laughter of a televised audience, thunder, flatulence, howling, moans, groans, back masked rabble, gibberish, and somebody yelling “I gotta go to work” and “Keep that goddamn kid from crying,” the track vividly mimics the noise of ’70s America, making the experience all the more stirring. The racket carries forth until an atomic blast leaves nothing but the sound of a beating heart, only to be overtaken by a brief closing jam before fading out completely.

Westbound’s 2005 reissue of Maggot Brain features four supplementary tracks, including an intriguing alternate mix of “Maggot Brain,” on which the full band is present, and three songs recorded by short-lived Funkadelic adjunct United Soul (also referred to as U.S. or U.S. Music with Funkadelic) in 1971. United Soul served as a vehicle for several musicians who would join the Parliament-Funkadelic collective shortly thereafter, namely Garry Shider, who remained a major creative force within the group until its dissolution the following decade. The United Soul tracks are all meritorious in their own sense, but the sincerely soulful “I Miss My Baby” is the group’s standout.

In the 50 years since its release, popular consensus has warmed toward Maggot Brain and critical response has evolved into acclaim. Rolling Stone has continually ranked Maggot Brain among the greatest albums of all time, also being featured in reference book 1001 Albums You Must Hear Before You Die. Most recently, it has also appeared on Spin’s list of the 50 best albums of 1971.

Love it or hate it, Maggot Brain is an album which ought to be heard at least once. While certainly not for everyone, it serves as a unique relic from a definitive moment in U.S. history—an intimate work of serious art on par with the psychotic sonic experiments of Frank Zappa. While not as polished or coherent as future favorites such as “Cosmic Slop” or “One Nation Under a Groove,” Maggot Brain is just as revelatory, a crucial cornerstone in the development of one of popular music’s most influential bands.