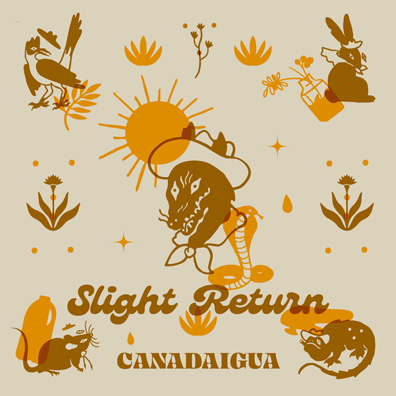 Canandaigua is the one-man project of Washington D.C.’s Raul Zahir De Leon. He’s a veteran of the tightly knit D.C. music scene, but Slight Return nonetheless feels every bit the discovery of a new voice. De Leon’s burnished and emotive yawp most recalls Joe Henry’s as does the see-sawing cadence of many of the EP’s tracks. And like Henry’s Civilians or Sparklehorse’s Vivadixiesubmarinetransmissionplot, the momentum that pulls Slight Return’s songs forward is generated from structures that feel they are hell-bent on collapse. The hodgepodge of instrumentation that comes and goes, all led by De Leon’s shambolic march forward, is a compelling thing to hear.

Moreover, De Leon has much on his mind and something to say about it. The child of Panamanian immigrants, not only does he reflect on the immigrant experience (“A Dime and a Ribbon”), his lyrics throughout cast an observer’s eye that are more descriptive of how things are, as opposed to how they should be. The opening squelch and carnival calliope rhythms of first track “Calm Through the Clearing” gives way to lyrics wrought with frustration over police brutality. But as De Leon does elsewhere, he gives a fourth wall breaking aside: “that’s just how it is.”

A few of the songs work better in concept than execution, as “A Lament for John William Henry” drags for a portion of its course. But borrowing lyrics from Ike & Tina Turner and The Doors for a story of a blues character of mythical proportions “punching holes in the Alleghenies” is a task worth tackling. The greatest rewards here though are found on “Diamonds” and the closing song, “The Margins.” Led by a mournful harmonica line and a deeply buried Ennio Morricone organ riff, “Diamonds” showcases De Leon at his vocally despairing, and least exaggerated, best. And though De Leon primarily records what is going on around him, “The Margins” decries the American historical narrative we have all been fed. He proclaims over a bed of drums, harmonica, and pedal steel, “I know who your heroes are supposed to be,” as the song evolves to a Biblical ending.

There is no doubt that De Leon has built on top of a foundation of the ancient folk and country blues underpinnings of American music. Many of which he openly gives a nod to. But he has also cobbled it together in a rickety roadside whirligig framework of his own making. Similar to the underground classic albums referenced above, Slight Return is the type of recording you’re not sure you want to let everyone else in on for fear that such preciously concocted melodies become commonplace. (www.canandaigua.bandcamp.com)