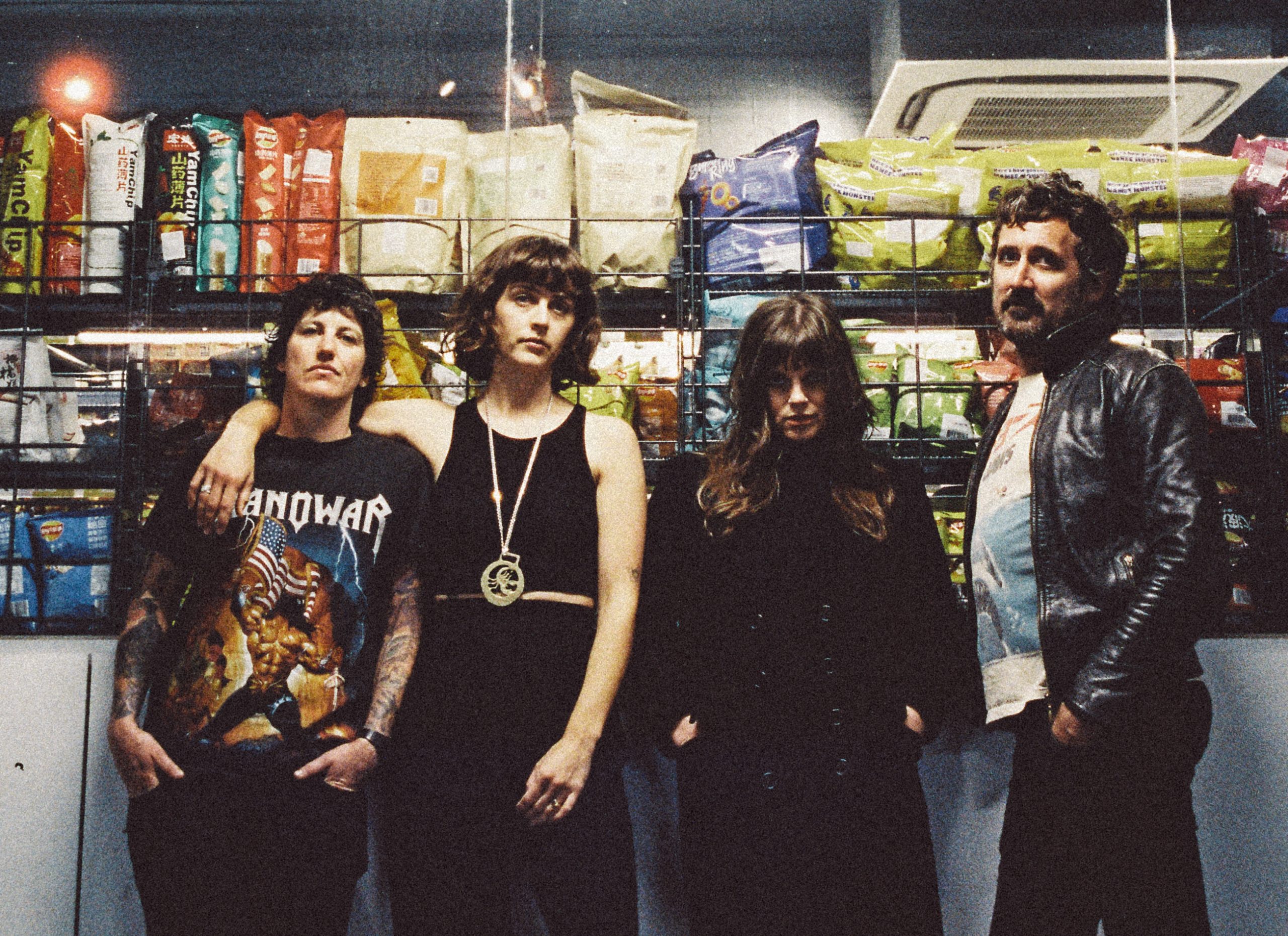 Read our Q&A with frontman Gareth Liddiard below

Melbourne art punks Tropical Fuck Storm are back today with their third full-length record, Deep States. Featuring Gareth Liddiard and Fiona Kitschin, formerly of The Drones, along with Erica Dunn, and Lauren Humme, the band came together with their 2018 debut A Laughing Death in Meatspace. After following their debut with their 2019 record Braindrops, they seemed primed for another 2020 album with new singles “Suburbiopia” and “Legal Ghost.” Unsurprisingly, COVID put those plans on hold, but after a year and a half of constant turmoil, the band is back again with their most weird and wild record yet.

Tropical Fuck Storm has always been a band inspired by the maddening surreality of crisis. Those two first records are filled with references to imperialism and climate collapse, with crisis looming over the very nature of their fractured worldview. Unsurprisingly, 2020 gave the band plenty to work with. Deep States mines similar territory, though now filtered through the caustic malaise and surreal paranoia engendered by the past year and a half of lockdowns and constant information overload. The band’s lyrical approach on Deep States is accompanied by references to Ashli Babbit, “nazis, pinkos, and MAGAts,” QAnon and Pizzagate, and cults. The record opens with the Second Coming of Christ and only gets wilder from there.

The band revels in the glorious chaos, taking on influences from noise, pop, hip hop, blues, and seemingly whatever else catches their eye. It’s all tossed into a blender and what comes out is sometimes heavy, sometimes psychedelic, sometimes groovy, and sometimes danceable. The result is experimental and, at times, impenetrable, yet simultaneously unrestrained, and almost perversely joyous. But, as frontman Gareth Liddiard points out in our Q&A, “Taste is the enemy of art, so forget trying to be cool or whatever. Just go nuts, enjoy it.” As always, the band is creating on their own terms, and on Deep States they have a great time doing so.

Deep States is out now via Joyful Noise. Listen to the full album and read our exclusive Q&A with Gareth Liddiard below.

(Under the Radar) You’ve been pretty much putting out music or touring nonstop prior to the pandemic. How was it being forced to slow down like that?

Pretty shit. I didn’t realise I liked touring as much as I did. Touring is this weird dichotomy where it’s not good for you because you drink too much and sleep too little and spend too much time sitting on your arse in a van and you punish your ears and eat garbage but it’s also great at keeping you fit because you have a 1.5 hour work out every night and it keeps you mentally switched on and busy.

So it hasn’t been a welcome break.

Was it difficult to regain that momentum when you reunited as a band and started writing again?

For sure. It’s hard to get motivated when you know everything is just going to get cancelled. And it’s hard to jump-start your imagination after 6 months of booze and crappy Netflix shows. It was like swimming through mud to begin with but we got it together in the end. Plus we had five big lockdowns during recording so we couldn’t get together all the time. It was just a huge drag but everyone’s going through it so we can’t complain.

What inspired you on this album compared to the last two? Obviously, the world has changed a lot since 2019.

Just everything that was happening in the world. “Inspiration” is probably the wrong word in that sense. Hardly an inspiring time we’re living through. But there’s so much dogma out there. So much denial of cold hard facts. It’s no wonder there’s so much anti-vax shit going on. There’s so much religious style sanctimony and people acting like they’re the first human on earth to be perfect and to know the score. Anyway, I’m congenitally allergic to rules. I was terrible in school, could never do what I was told once I was told. Terrible with parents and cops. And now I’m terrible with modern ideologies. That’d be the “inspiration” I guess.

You’ve described this record as more collaborative in its creation. What was this experience like for you as a band?

When we could actually get together it was just a lot of fun. They’re fun girls. Extremely loud and silly and outgoing. I’ve been in plenty of bands with boys who were great and hilarious but the TFS girls take it to an extreme. I can basically just observe them talking crazy obnoxious shit and I know I’ll get a couple of wild lines for songs out of it. That’s one method of collaboration. On the flip side, no one in the band is spring chickens. They’ve all been around long enough to have sharpened up their bullshit meters in a musical sense. They’re on the musicologist level even though we’re essentially trashy punk or whatever so it’s easy to make choices and delete any crap we might come across. They just know what they’re doing even though as a unit, we have no fucking idea what it is we’re trying to do.

What’s the writing process like? How much of the songs are sketched out before you’re in the studio and how much are improvised?

We don’t often do any preparation. Or not much. We kind of walk into the studio with nothing and try to change that. We do a lot of improvisation in the studio but generally not in the classic jazz or Led Zep sense where you play together and make shit up on the spot.

Instead, we all just grab something like a drum machine or a weird percussion thingy and plug it into the wrong hole on the wrong piece of gear and tweak and tweak until a happy accident occurs. Then we do some editing and more accidents happen. Eventually we’ll have a hard drive full of accidents and then we’ll splice it all together like editing a film or something…. Sooner or later we’ll have a song. Then we might try and learn it and re-record it. Something like that. No rules.

“Legal Ghost” was first written back in the ‘90s? How has it evolved since then and what led you to revisit it?

It’s probably just a slightly different arrangement to the original that came out on the Bong Odyssey album. Erica added a cool guitar noodle to it. We prefer to noodle on our guitars, rather than whatever it is you’re supposed to do. Maximum noodle is referred to as a Kooky Noodle. We’re always aiming for the Kooky Noodle.

“G.A.F.F.” is a very relatable feeling, at least for me. How do you as a band cope with “give a fuck fatigue?”

Well, it comes and goes. It’s not a permanent state. I guess the reason for that songs existence is to make people forgive each other for saying “Ya know what? I’m too busy, I don’t need to die on every single hill that random crusaders on the internet or on the news point out to me, I don’t actually give a fuck”. Because in 2021 the only thing worse than not caring and minding your own business, is admitting that in public. But its perfectly human to get careworn every now and then.

In your bio, “Blue Beam Baby” is described as an homage to Ashli Babbit. What inspired you all to write about her?

Just the whole Qanon thing. We played at Comet Ping Pong in DC years ago so we’ve followed the Q thing from the outset. We played there right after the guy with the AR15 went in and shot it up. We had people on the internet telling us we loved pedophiles because we played there. It was pretty funny. I think Ashli Babbit was an idiot. She was kicking a hornet’s nest when she tried to get through that door. And it was a hornet’s nest that happened to be pointing a gun at her. But she thought she was allowed to do that, whereas maybe a black woman would not be allowed. She got it wrong.

One thing I love about the band is how hard it is to classify your music. You clearly avoid fitting into easy boxes. How much of that is an intentional choice? Do you usually set out to create without genres?

People ask this a lot but it’s pretty easy to explain. The youngest member of TFS is 35, the oldest (me) is 45. When I was 10 I’d turn on the TV and Ice-T would be on the ABC (our version of PBS). So would Run DMC, AC/DC (almost permanently), Public Enemy, Blondi, James Brown, Stravinsky, Miles Davis, Salt N Peppa, Maria Callas, Prokofiev, Sonny Rollins, Thelonious Monk, New Order, Bronski Beat, Kate Bush, Kraftwerk, Talking Heads… This was all on the ABC music and arts shows. Even wild shit like Lubricated Goat was on TV. You either watched the ABC or sport. Nothing else was on and I grew up in a female household so we didn’t watch sport. Fiona and Erica and Lauren were the same. We absorbed a lot of different shit. Now we’re adults with all the equipment to generate any of that kind of stuff so we naturally do. In our horrible way. I mean we are fucking broke, but this year we have a Steinway grand piano in our house because a friend needed somewhere to store it while they were away. It’s worth more than our house. That kind of thing doesn’t happen when you’re in your 20’s. It’s fun being an old fart.

Part of your music is satire and creating these paranoid twisted reflections of the extremes of today’s world (suicide cults, Q-Anon). With the world so off the rails, even just in the past two years, you often hear that it’s beyond parody, stranger than fiction etc. Is that the case for you all? Is everything difficult to satirize or twist? And what, as writers, are you hoping to capture?

Yeah, it’s hard to do satire right now. Everything is already ridiculous. But look at Dada or Surrealism. That shit came about in similar times for similar purposes. So you can draw from stuff like that. And there are plenty of precedents for that in rock n roll or whatever like Suicide or Butthole Surfers or Einsturzende Neubauten or Devo or Birthday Party. All we’re trying to do is keep shit real and make little universes that reflect the world. It’d be a waste of good material if we didn’t.

How do you balance the more playful and exploratory side of the band with the politically-minded material? Most would see a contradiction there, but you all don’t seem to.

I can’t see why it would or should be hard. Taste is the enemy of art, so forget trying to be cool or whatever. Just go nuts, enjoy it.