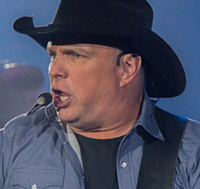 
After revealing earlier this month that he planned to reassess plans his current stadium tour as a result of the recent resurgence in COVID-19 cases and the prevalent Delta variant (NET NEWS 8/3), Country superstar GARTH BROOKS announced TODAY (8/18) that is canceling his next five shows. TICKETMASTER will automatically refund approximately 350,000 tickets, and BROOKS will be looking to 2022 for potential reschedule dates.

The affected shows are at PAUL BROWN STADIUM in CINCINNATI (which had been scheduled for SEPTEMBER 18th), BANK OF AMERICA STADIUM in CHARLOTTE (9/25), M&T BANK STADIUM in BALTIMORE (10/2), GILLETTE STADIUM in FOXBOROUGH, MA (10/9) and NISSAN STADIUM in NASHVILLE (not yet rescheduled from its weather delayed 7/31 date).

“In JULY, I sincerely thought the pandemic was falling behind us,” said BROOKS. “Now, watching this new wave, I realize we are still in the fight and I must do my part. I have asked the wonderful cities of CINCINNATI and CHARLOTTE to wait too long, and I don’t want to now do that same thing to the great folks in BOSTON and BALTIMORE.”

He also referenced a NASHVILLE show, which was called off three songs into the opening act due to weather on JULY 31st. “As far as NASHVILLE, we are looking for a make up date from the JULY rain out, and though this is not COVID related, to make them wait makes me sad, as well,” BROOKS said. “So, it is with a heavy heart we announce the decision to cancel all five shows, but with a hopeful heart, we will reschedule and start over when this wave seems to be behind us.

“The joy I have seen in everyone’s faces as live music returns has been more than worth our constant diligence to maintain safety protocols not only for the fans, but for our band, the crew and the hard working staff in these stadiums,” BROOKS continued. “Their dedication to safety for the people who fill those seats has been a miracle to watch and a blessing to receive. I am truly grateful.”

His team will continue to monitor the virus’ impact and watch how schools, sports, and other entertainment entities are handling this stage of the pandemic, according to a spokesperson.

“I’m sincerely hoping we are back on tour before the year’s end,” added BROOKS. “With that said, the most important thing to me is fulfilling my end of the Stadium Tour by making sure every show is doable before putting tickets on sale (that is why we pulled the SEATTLE on sale) and making sure the environment these people are trading their time and money to put themselves into is not only the best experience ever, but also the safest one we can provide.”

Since resuming the tour in JULY, BROOKS has performed in front of more than 300,000 fans in five cities, most recently LINCOLN, NE.