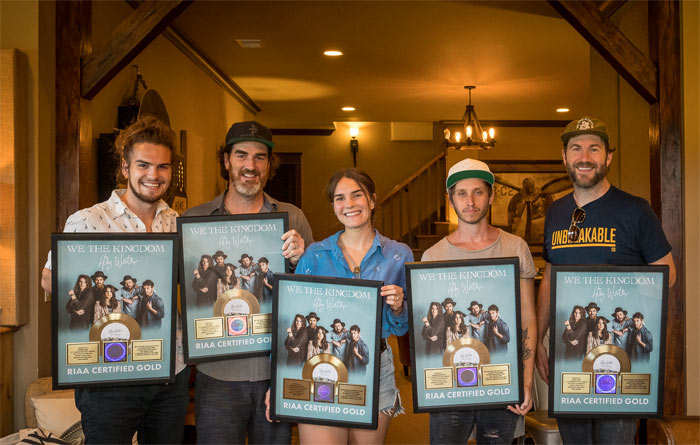 The 2x GRAMMY-nominated group We The Kingdom has notched its very first RIAA-certified GOLD record with “Holy Water,” the band’s first No. 1 single.

Fresh off the successful release of their latest album, ‘Live at Ocean Way Nashville’ (7.2), which featured a live version of “Holy Water,” the group continues to add to its already extensive list of accolades this week, nabbing three Dove Awards nominations. Vying for the title of Contemporary Christian Artist of The Year, their standout song “God So Loved” is also nominated for Worship Recorded Song of the Year, while the band’s debut album, ‘Holy Water,’ is up for Pop/Contemporary Album of the Year.

Made up of brothers Ed Cash and Scott Cash, Ed’s children Franni Rae Cash Cain and Martin Cash, and close family friend Andrew Bergthold, who all came together as musicians during a life-changing Young Life experience, the multi-generational group has garnered continuous praise since their debut in 2018, racking up more than 265 million+ global streams and 300k social media followers to date in just a few years as a commercial band.

We The Kingdom will embark on a headline tour this fall featuring major arenas, fairs, festivals and more through November, with many dates already sold out. For more information, visit wethekingdom.com.


For more info on We The Kingdom, visit the JFH Artists Database.