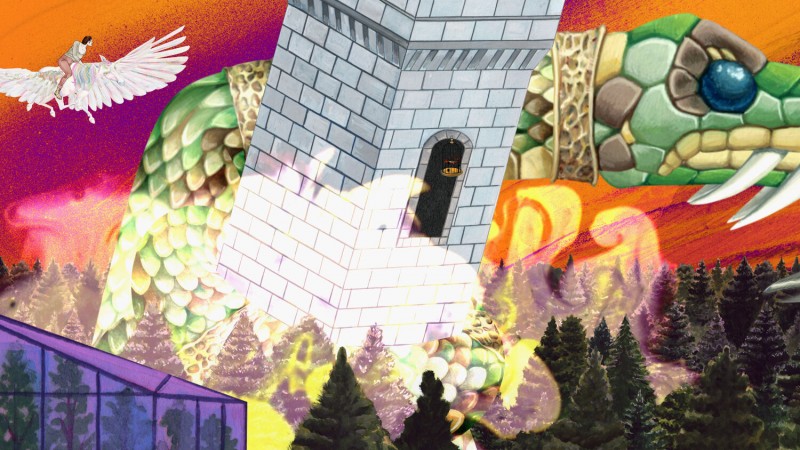 Lauren Grey (Lake Bell) is a cryptozoologist, someone drawn to the world’s rarest, unseen creatures since the mythical baku swallowed her nightmares as a girl and gave her the gift of sleep. As an adult, she’s dedicated herself to radical activism in protection of these cryptids, saving them from poachers and others who would exploit their abilities or bring them harm.

To further her efforts, Lauren has joined forces with a wealthy heiress, Joan (Grace Zabriskie), and built the Cryptozoo outside of San Francisco: a theme park where cryptids can live, work, and be seen by humans. When they find a lead on her childhood friend, the baku, she works with a young gorgon (Angeliki Papoulia) to find it before the army can hunt it down and turn it into a weapon.

Set against a backdrop of the counterculture and the conflict in Vietnam, Cryptozoo is the latest feature from graphic novelist and filmmaker Dash Shaw (2016’s My Entire High School is Sinking Into the Sea). As a piece of animation, it’s incredibly engrossing. Shaw’s thin-lined, hand-drawn style is perfect for bringing the movie’s bizarre menagerie to life; any more precision would have robbed the mythical monsters of their magic. Divorced from its adult content, the animation style is almost childlike, bringing to mind the sort of monsters kids draw in their school notebooks.

The psychedelic, dreamlike quality of Cryptozoo is necessary to immerse viewers in the movie’s far-out premise. After a genuinely frightening opening that almost sets it up as a horror film, the movie devolves into a somewhat lackluster detective story as our heroes chase the missing monster from one locale to the next. It’s visually creative any time a new cryptid is involved, yet feels routine when they take a back seat to humans. If you’re not given something weird and interesting to look at, it leaves the viewer too much time to wonder things like, “How does most of the world not seem to know about cryptids, when there’s a Disneyland-sized amusement park dedicated to them in San Francisco?” Or “Hasn’t anyone thought of photographing these wondrous beasts?”

Thankfully, a wild ending erupts that is genuinely thrilling, like the finale of an action blockbuster drawn with crayons and paint. We won’t say much, but calling this “Jurassic Park with centaurs” might be a pretty good way to sell the film. (www.magpictures.com/cryptozoo)