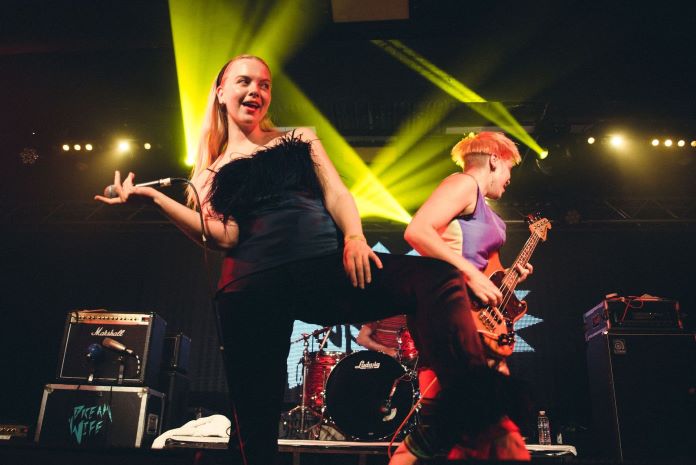 It wasn’t long ago that the prospect of a UK festival actually happening this summer would be seen as little more than a fantasy pipedream. With the hospitality sector neglected and ostracized by a government more content with financing their mates’ private enterprises than keeping one of the UK’s most prosperous industrial sectors alive. Indeed, despite the roadmap to relaxing Covid-19 related restrictions being announced as far back as February with the original intention for everything to fully reopen by the end of June, a lack of clarity around insurance or policing events safely left a number of festival organisers with little alternative but to cancel for the second year in a row and look to 2022 for their grand reentry into putting on events – provided they survive that long.

So it’s to the credit of the team behind Get Together for persevering against all the odds, despite being advised numerous times along the way to postpone and reschedule until next year. The brainchild of Somewhere, an independent locally based promotions company led by Sheffield based Kieran Crosby, who in conjunction with Leeds’ well established Futuresound conspired to create a two-day event originally planned for the first bank holiday in May.

Situated at The Foundry in Sheffield University and held across two live music stages with DJs playing a third space alongside various food vendors and a bar entitled the Magic Rock Garden. It’s been a turbulent ride along the way, with many enforced line-up changes – some even on the days of the festival – that few could have predicted proceedings to run so smoothly when it mattered. Nevertheless, like clockwork they did, in the process creating an event that exemplified the communal spirit of the UK music scene. Not only from the organizers and artists, but also those in attendance as fans and punters too.

In what was one of the first UK festivals to open at full capacity without being a test event, Get Together lived up to its moniker. Aside from the music itself (which was great by the way), came a sense of defiance. Everyone pulling together for the common cause, the long awaited return of live music. This wasn’t about headliners (although Get Together did manage to pull a couple of blinders, particularly local heroine Rebecca Lucy Taylor and Self Esteem for the coveted Sunday night closing spot) or genres. This was about taking baby steps that resulted in a giant leap forwards by close of play Sunday evening with plaudits ringing far and wide from all and sundry.

Every act received rapturous applause across both days, with punters listening attentively and participating when required (Hello Dream Wife !). With musical highlights aplenty, it was difficult to envisage any abject disappointments other than the beer running out early Saturday evening. So while it would be easy to write a list of who played when and what, we’d like to focus on five overall highlights from an impeccable 48 hours in Sheffield.

OK, so it shouldn’t be too much of an expectation to want the stages to run on time, particularly when there are only two of them running parallel alongside one another. Or for there to be no sound bleed from one area to another. Except that rarely happens. Yet here over the course of its two days, Get Together and the sound engineers at The Foundry nailed it to perfection. Even better was the fact both live music stages were so close together it was possible to catch every single act without missing a solitary note. Meanwhile the third stage in the Magic Rock Garden played host to a bunch of impressive DJ sets, our favourite belonging to Nottingham based selecta Red Letter Nights.

Again, it’s not always a focus at festivals as there’s usually an expectation to pay premium prices for everything. Whether it be a warm pint of Carling in a plastic cup or fat drenched burger in a stale bun. So it was refreshing to see the organisers’ focus reaching beyond the live entertainment, with its Magic Rock Garden catering for all kinds of beverages from locally brewed ales to cocktails while also serving as a third stage for DJ sets. Not to mention an exciting array of food that catered for all tastes at more than reasonable prices. With tickets priced at just £25 per day or £35 for the weekend, Get Together was a bargain on several fronts.

With every demographic covered and all here with one common goal; to savour the return of live music. What could possibly go wrong? Old acquaintances were reconvened, new ones made at various points over the weekend. While the sense of community coupled with the vibe and slick organizational elements would put Get Together on a par with Rockaway Beach for all inclusivity. The only difference being this was held in a city centre University rather than seafront holiday camp. Indeed, it was so refreshing to see so many people getting into the spirit of the weekend, while no doubt discovering artists that will almost uncertainly become lifelong favourites along the way.

Admittedly we shouldn’t even be discussing this in 2021, but the so-called dearth of female headline acts was put to shame several times over during the course of the weekend. While Self Esteem’s showstopping finale will rightly grab the front page headlines alongside Black Honey ’s emphatic performance 24 hours earlier, Dream Wife’s set on the Saturday evening will almost certainly guarantee they become future festival headliners in waiting. Making a glorious return to live music while playing songs off last year’s critically acclaimed second LP So When You Gonna… for the very first time, their eclectic mix of punk, pop, hip hop and everything else in between brimming with attitude, presence and an unquenchable degree of enthusiasm make them one of the most exciting bands to emerge in years. Comparisons to Le Tigre, Shampoo and Pop Will Eat Itself seem inevitable and perfectly feasible, as does one person’s description in the bar later that called them “Sleater Kinney for the dancefloor.” There was even a cameo from guitarist Alice Go’s grandmother resulting in floods of joyful tears both on and off stage to cap off an incredible show that will be talked about for a long time to come.

MUSICAL DIVERSITY AT ITS FINEST

It would be amiss to not hail the musical talent on display at a music festival, and it goes without saying Get Together struck an immense chord for diversity. Especially considering the ever changing line up due to (mostly) Covid related absences. Manchester’s Blanketman look to their home city for inspiration, channeling the Faustian poetry of Mark E Smith through the Happy Mondays musical mélange of anything goes. Which works a treat throughout their forty minutes’ set, particularly on “National Trust” and Leave The South.” Tim Burgess’ status as the Saviour of Lockdown is already assured thanks to his graceful Listening Parties on Twitter, and his solo set is an eclectic melting pot of ideas and styles. Culminating in a rendition of his and The Charlatans signature tune “The Only One I Know”, we are not worthy. Playing the smaller Studio stage on Saturday evening, Bleach Lab are a revelation. The four-piece might be playing their first ever festival south of London to an unfamiliar audience, but it doesn’t take long for their shimmering fusion of melancholia and ethereal shoegaze to win over hearts and minds forthwith. Meanwhile, Hull’s bdrmm also fuse reverb with slacker infused post punk, earning the tagline Slowdiiv in the process.

One of Sunday’s late replacements The Goa Express demonstrate why they’re currently one of the hottest musical properties in the land. Sounding like a long lost Creation Records band from the mid 1980s (think The Loft or The Weather Prophets) fused with adrenaline and a plethora of hit singles in waiting. Eno Williams and Ibibio Sound Machine proved to be the biggest draw of the day, if not the entire weekend. Their infectious mixture of African rhythms and electronic funk proving a hit with everyone. And by everyone that really does mean EVERYONE! It’s also a pleasure to see The Orielles back on a stage where they belong and doing what they do best, which is playing a heady and occasionally improvised mix of songs from their three albums.

Overall, Get Together represented everything we’ve come to miss about music festivals since the pandemic put everything on hold while delivering the most unforgettable of experiences.

Roll on 2022, because you can sure as hell bet Under the Radar will be back for more!