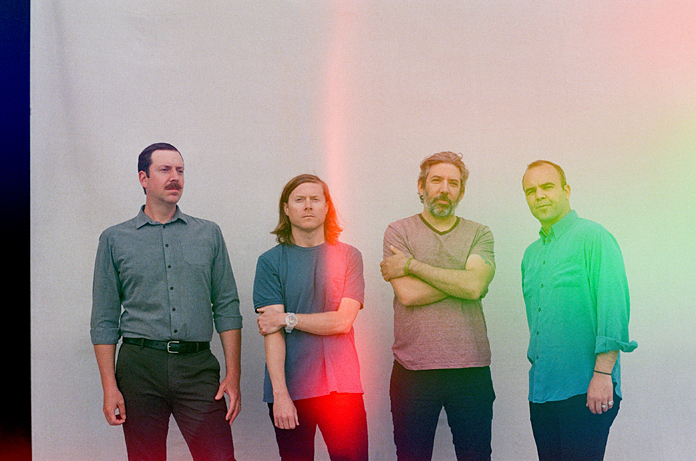 Future Islands on “As Long As You Are”

When one mentions Baltimore synth dynamos Future Islands, the first word that springs to mind isn’t exactly “restraint.” After all, this is the band that became a viral sensation when frontman Samuel T. Herring two-stepped across the Late Show with David Letterman stage, belting out the lyrics of their song “Seasons” as his bandmates deftly played propulsive rhythms. That bombastic performance catapulted the band from cult favorites to festival draws. However, Future Islands’ newest album often finds them taking a far more intimate, understated approach.

Quieter songs like the throbbing “Moonlight” or slow burning “Thrill” on As Long As You Are (the band’s sixth studio album) are meant to counter the very elements that made their 2014 breakthrough Singles such a success. As Herring recalls, Future Islands toured for 22 months after making a splash on Letterman. Their 2017 follow up, The Far Field, was made with another daunting gig cycle in mind. Herring says: “The Far Field was our most focused road-ready album.”

But what got lost in that whirlwind of success? Something major, according to Herring.

The frontman—ever a showman, he was bathed in sunlight streaming in from his window during the Zoom call, making him one of the rare users to look splendid on the platform’s grainy display—admits Future Islands failed to write subtler songs in the wake of their Letterman breakthrough. “A song like ‘City’s Face’ on the new album maybe won’t work live. But it really harkens back to our earlier LPs like In Evening Air that had special experimental songs that mean a lot to people,” Herring says, adding: “We wanted to be open to making some weirder songs this time.”

Bassist William Cashion recalls a higher-up at their record label coming back stage during The Far Field tour and encouraging the band to push the envelope on their next album. However, the eccentric suit later contradicted himself, proclaiming “I think you should work with Pharell!” Cashion says he would be honored to work with that star hitmaker, but recalls telling the exec: “Last time you told us the exact opposite, to make the most experimental album we could!”

That earlier advice proved a better fit for the band. Cashion says he, Herring, keyboardist Gerrit Welmers, and drummer Michael Lowry (who toured with the band for years but now is an official member) would often jam together in order to write some of As Long As You Are’s songs. At other times, members would bring parts they had worked on to the studio for the band to build upon. Cashion adds: “We tried to come at songwriting from different angles to build a more dynamic and diverse group of songs. We missed that on The Far Field.”

This is also the first album where the band is credited as co-producers (no, they didn’t recruit Pharrell). Cashion says he and his bandmates were frustrated while recording The Far Field when John Congleton, the Grammy winning producer they had enlisted, was dismissive of some of their more boundary pushing ideas. That prompted them to handle their own recording of As Long As You Are, and invite six producers to test mix some of those demos, to help the band decide who they would collaborate with. In the end, however, Cashion says: “We decided the mixes we made were just as strong, or stronger. And our label agreed.”

Cashion adds: “That gave us the confidence to do it ourselves,” which prompts Herring to smile and exclaim, with fists in the air: “We can do it!”

[Note: This article originally appeared in Issue 68 of Under the Radar’s print magazine, which is out now. This is its debut online.]