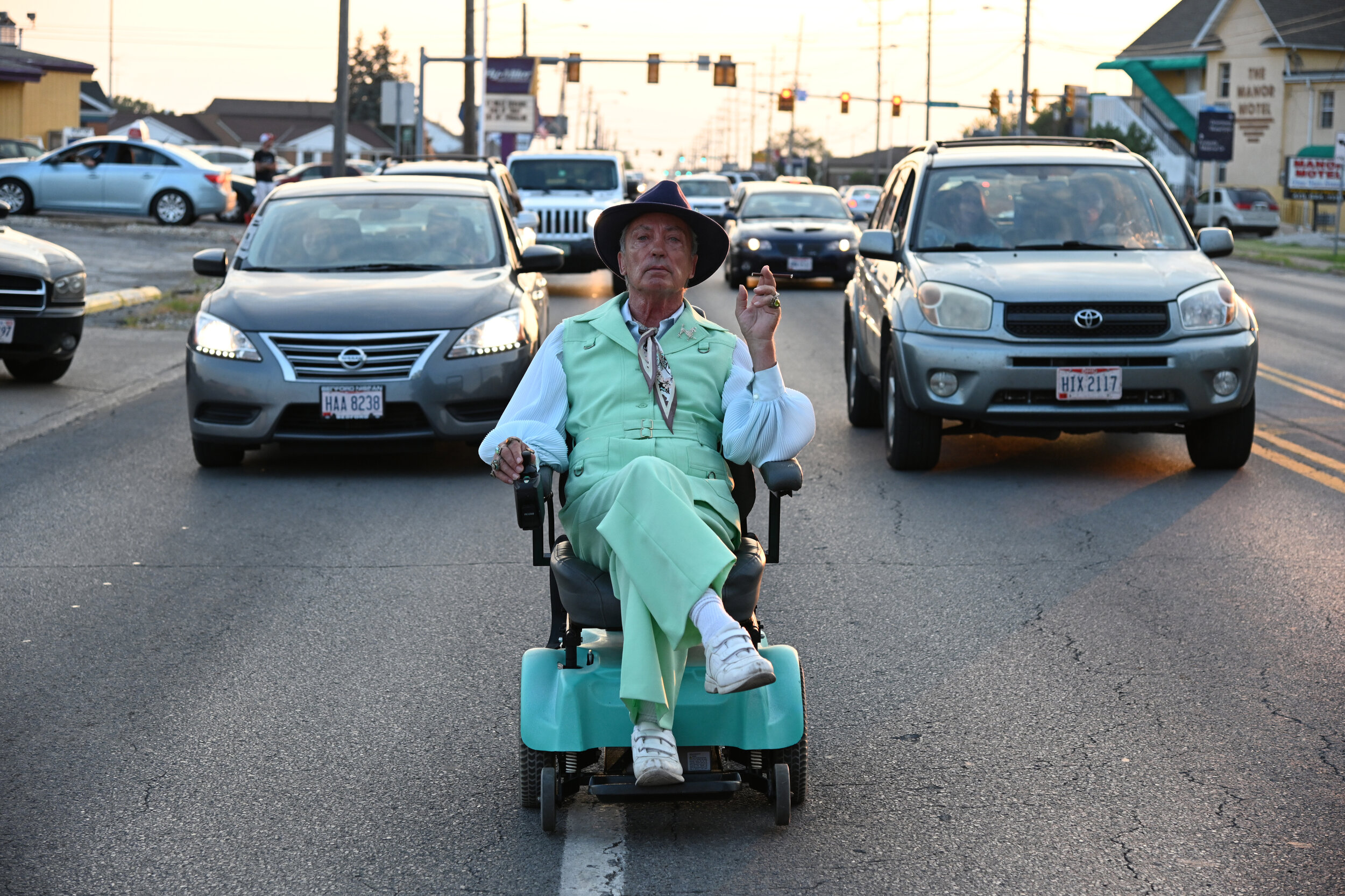 It took a year-and-a-half for Todd Stephens to find the perfect person—in this case, the German actor Udo Kier—to play the protagonist of his latest feature film. For a tribute project several years in the making, the wait was nothing as long as it meant Swan Song found its mark.

Stephens is the writer, producer, and director of Swan Song, a deeply personal script for the Sandusky, Ohio-born director. For this film intended as the third entry of an Ohio-based trilogy of works (Edge of Seventeen, Gypsy 83), the final turn is Stephens’ greatest work to date, a heartfelt tribute to a former gay icon and larger-than-life local hairdresser, Patrick Pitsenberger. Kier is ideal in this starring role as Pitsenberger, an aging man charged with a final request from beyond the grave to do a former client’s hair for her funeral. Swan Song also features short yet meaningful turns from Jennifer Coolidge and Linda Evans.

We recently sat down with Stephens to hear more about the meaning of Swan Song, the brilliance of Udo Kier, and what it’s like to have your hometown wrap its arm around you.

Matt Conner (Under the Radar): As a tribute project to Pat, I’ve also read where you said you didn’t know him that well on a personal level. Did that distance help you in a way to be able to craft this project?

Todd Stephens: I think it did sort of making it easier in a way. It almost allowed me to have my own fantasy of who Pat was to a certain extent. I did meet him several times, and I remember seeing him numerous other times. I also met David and got to know him more than I did Pat. But I also heard all the memories from friends and family. I did a lot of research and got a lot of amazing stories like a lot of the things in the film are from Pat’s life like the folding of the napkins and the smoking of the More cigarettes. Obviously I also remembered how he used to dress with the rings and all of that. But yeah, it did allow me to let my imagination fly a little bit more.

Have you had a chance to get feedback from Pat’s family and friends?

I’m going to my hometown next week to screen it and I hope that some of Pat’s old friends, who haven’t seen it yet, and his sister will see it. I’m excited to hear what they say.

As part of an overall trilogy of films about growing up in Ohio and something so obviously personal to you, how cathartic was it for you to wrap filming?

The thing that was so cathartic about the trilogy experience is that when we did the first film there, Edge of Seventeen, more than 20 years ago, it also had a queer protagonist and we made the decision to keep it a secret. When you make a low-budget film, you need a lot of help from the community, and we felt people wouldn’t help us if they knew that the film was really about. We created a fake script, which was really kind of sad in a way. People did find out ultimately and some of them were pretty upset about it.

The cathartic thing, I think, is that when I went back to make this one, right when I got there, my hometown was having their third annual Gay Pride festival. The attitude about gay people in my town had completely transformed and changed. It was interesting to use Sandusky, Ohio as a barometer to see how times have changed in one specific town.

The community could not have been more supportive this time around. People were donating rooms for Udo and I and the cast and crew around town. The city helped us a great deal and we got locations for free. We got extras and props. There was just so much love. My hometown wrapped their arms around all of us, and that was just so different than the Edge of Seventeen experience.

Was that healing for you?

Absolutely. Big time. Almost mind-blowing, really. I think I’ll fully process it when I go home and watch the film in my hometown with everybody there. But I can’t wait, because everyone will get to see their hometown on the screen. We shot the whole thing within a four block radius, right in the epicenter of town, so I can’t wait to see how people will react.

As the writer, what was the biggest hurdle to getting Pat right?

Well, the biggest hurdle wasn’t so much I the writing of it but in the casting of it, that it could have really gone the wrong way. It was a very hard role to cast because it’s a pretty flamboyant character and so it could easily go the top into something that wasn’t real. It took me a year-and-a-half to get to the point of realizing that Udo was the dream person to play the part. So the casting was the most difficult part of the whole process.

So what allowed you to thread that needle and arrive at Udo?

We’d had a couple A-list actors who were interested at various points along the way and then it would fall apart for one reason or another. Over time, I came to realize that for this particular film, I felt like I wanted queer actors to play the parts. Unfortunately there’s not a lot of queer actors from that older generation.

Then my casting director asked, ‘What about Udo?’ At first I thought, ‘Wait, he’s German. The real Pat is from West Virginia.’ He’d always played a villain and stuff like that. But when I thought back to all the Udo movies that I loved and then went deeper into his filmography, I realized he was the only person who could do it and do it right.

We’ve become really great friends. He helped me do a Kickstarter campaign which is ultimately how the movie got financed. We’re family now. The big huge bonus of making a movie is making new friends like that. Udo and I talk almost every day.

Was there a memorable moment on set when you realized that you’d gotten things completely right with Udo in the role?

Yeah, one of the moments was when he first puts on the green suit.

You know, Udo was very in the moment with this. He didn’t want to rehearse. He wanted to keep it all fresh and spontaneous, so he didn’t really want to try the suit on much ahead of time. We shot the movie in sequence, which is really cool, so we started in the nursing home and then the characters came to life as we were shooting. Then it was time for him to get the suit, and once he got it in, we couldn’t get it off of him. [Laughs]

It was a wow moment. I remember going up to him and saying, ‘Udo, you’re wearing the suit. The suit is not wearing you.’ It was kind of an outrageous outfit and not everyone could pull it off, but he just became the old Pat when he put the suit on. It’s like he was reborn. It was electrifying the whole crew. We knew we were onto something special. I’ll never forget that moment when he first put the suit on.

When you have a tribute project like this with these hopes of honoring someone, how did it feel to watch the final product? And how did that compare with what you’d hoped for?

It’s better than what I had hoped. A lot of things we discovered during the shoot that weren’t even in the script—the sort of magical realism, the sort of ghosts that Pat experiences. Is it happening or isn’t it? That was’t in the script so much. We just felt that as we were shooting and added things. Even in the editing, we discovered a lot of that.

I felt like I was making a film that was paying tribute to the dead, to all these people I knew—not just Pat and David but all these people I knew from my hometown. I felt their spirit, their presence, their energy. I wanted to get that in the film, to get some more magic in there, a little more mystery. So when I see it, I think wow.

It all came out so much better than I thought. You have to stay present in the moment. A script is a blueprint and you want to be open to all the possibilities that speak to you as you make the film, so it just wound up being so much more than I dreamed originally.

We’ve talked about Udo, but you have some great other cast members here with Jennifer Coolidge and Linda Evans. How was it working with them?

It was amazing. They were just so kind. They’re not doing this for the money. They’re doing it because they love the project, you know? Jennifer was my first choice for the role and we could never get through to her. Finally at the last minute, we tried one last time and she’d gotten a new manager, so we finally got through to her. Within a week, we were making the movie. It was one of those movies where everything fell into place, which doesn’t always happen.

Same thing with Linda. We got the script to her and she read it pretty quickly and just called and was so moved and touched by it. She came out of retirement to do the movie. She hasn’t done a film in 20 years, so I was just so honored that they would come to a little town in Ohio and do this with me. They’re amazing. (http://www.swansongfilm.com)