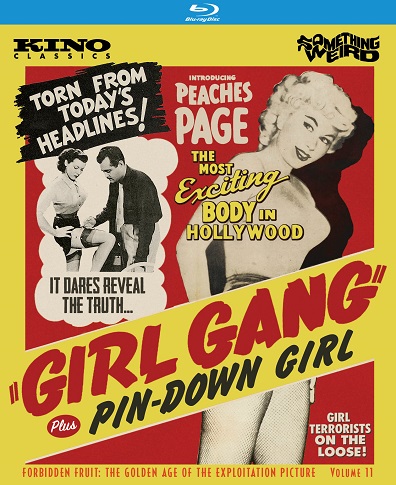 There was a curious time in the 1950s when exploitation films no longer had to pretend to be “educational” to turn their lens towards controversial or salacious material, but still couldn’t really show much skin without getting shut down. This transitional period accounts for peculiar films like Ed Wood’s Glen or Glenda?, but that’s just one from a bottomless well of freaky cut-rate cinema. One of the missions of heroic Seattle institution Something Weird Video has long been to preserve such strange little time capsules, and for this double feature (a co-release with Kino Lorber) they’ve dug up two films which absolutely exemplify the sub-genre.

I bring up Glen or Glenda? partly because Girl Gang and Pin-Down Girl both have connections to that infamous film beyond just era or genre. All were produced by roadshow impresario George Weiss; all feature sleazy tough guy Timothy Farrell in prominent roles. Farrell, in fact, is the closest thing to a real actor in these films: he can’t save the awkward dialogue, but he can deliver it with something resembling rhythm and charisma. The rest of the cast were hired for their looks, or (probably) because they put up some money for the production (this sounds like a criticism, but really it’s just par for the course).

Girl Gang is a cautionary tale about drugs, wherein marijuana inevitably leads teens down a slippery slope towards heroin addiction and robbery. It’s as hokey as it sounds, maybe more, but it’s a hoot; much of the shock value has been muted by time, but an extended scene where Farrell very explicitly and graphically spells out how to shoot up is still a jaw-dropper.

Pin-Down Girl takes place in the seedy world of women’s wrestling, and is basically built around showcasing lead “actress”/real-life wrestler Peaches Page. There’s a lot of ogling of Page’s curvy frame throughout, both for comic relief and in hopes of keeping people awake after a couple beers in at the drive-in. It’s intermittently funny (both intentionally and otherwise) and the ending is pretty satisfying, but its appeal will be primarily to hardcore ‘50s cheesecake enthusiasts.

Some people (MST3K fans especially, in my experience) love to mock movies like these for not being masterpieces, for being slipshod and shameless potboilers. The frustrating thing about this is not that they’re wrong in those impressions, but that they think this means the films were unsuccessful. Girl Gang sets out to titillate audiences with drug imagery and women’s legs; Pin-Down Girl sets out to do the same with women’s legs and violence. If you ask me, both films are pretty successful, silly though they may be, and there’s a richer, deeper satisfaction to be gleaned without copping a superior attitude about it. Sometimes, the best fun is cheap fun.