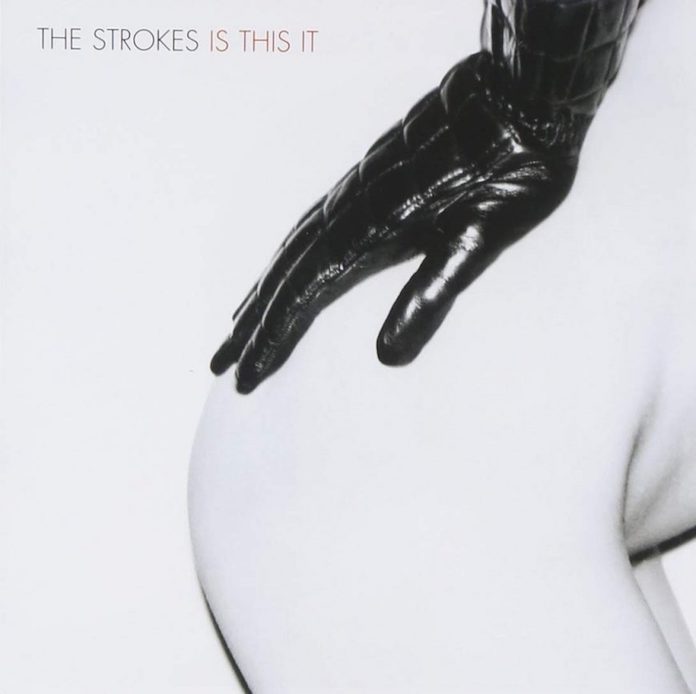 The Strokes – Reflecting on the 20th Anniversary of “Is This It”

Once in a blue moon, there arrives a debut album so charismatic, so controversial, so funny, and so alarmingly human that its harbingers are immediately set apart from their peers, ascending to a higher echelon reserved only for those few who manage to knock the ball straight out of the park on their first swing. That such a release would arrive at the dawn of a new millennium is all the more significant, as it managed to meld the jitteriness and cool indifference of the mid-to-late ’90s and compliment it with the retro-chic fixations of the emergent era, successfully forging a major catalyst for the ultimate rock and roll revival.

The Strokes’ 2001-released debut album, Is This It, is unique, in that it serves as a comprehensive introduction to the up-and-coming New York City quartet’s stylish blend of post-punk, new garage rock, and Britpop-inspired indie rock, although their specific influences are sometimes difficult to pin down, with the group denying familiarity with Television, but declaring themselves Ramones and Velvet Underground devotees. The latter serve as an obvious forebearer to the raw, spasmodic electricity of Is This It, although frontman Julian Casablancas streetwise musings on youth, sex, and modernity lack the transgressive morbidity of Lou Reed’s enduring backstreet verse. Still, The Strokes cannot be dismissed as yet another spawn of pretentious, run-of-the-mill, East Coast hipsterdom, as their education runs far deeper than that of mere nostalgia-chic. The raw defiance shared between guitarists Albert Hammond, Jr. and Nick Valensi electrifies each track, while Nikolai Fraiture’s bass lines and Fabrizio Moretti’s percussion form a melodic curtain around Casablancas’ deadpan vocal deliveries, often bringing to mind a range of artists, such as Iggy Pop and Cyndi Lauper, all closely studied by the band. The Strokes are musical savants, the world quickly realized, immediately setting themselves apart from their eager peers as the fountainheads of the popular culture phenomenon that is Is This It.

The album’s opening title track begins with a frantic ringing sound effect—the album’s fifth track “Someday” sped up and played in reverse—before giving way to Moretti’s steady beat as Casablancas sings “Can’t you see I’m trying?/I don’t even like it/I just lied to/Get to your apartment.” The unaffected manner in which Casablancas sings is, in a certain sense, representative of a generation too cool to genuinely concern itself—a product of the new millennium he addresses on the subsequent “Modern Age,” of which he declares “Start to pretend, stop pretending/It seems this game is simply never-ending.” Although he seems neither flustered nor enthused by the era into which he has come of age, the gravelly screams and shrieks of passion punctuating certain verses of “The Modern Age,” as well as that of many other tracks on the album, suggest a deeper sense of sentimentality lurking just beneath the surface. Deriving its title from Brave New World, “Soma” tackles the crushing weight of peer pressure felt by an uncertain protagonist as he attempts to navigate the New York drug scene, thinking “And I am stop and go/In your eyes/See I am stop and go/In your eyes.” On “Soma,” Casablancas displays just how far he can take his fragmentary stream of consciousness narratives, carving shards of humanity amidst the relentlessness of youth. The jingle and bounce of the conversational “Someday,” a genuinely astounding Strokes song, finds two individuals, now estranged, mulling over their shared and singular pasts. Some of Casablancas’ finest lyrical efforts can be seen here, creating one of Is This It’s most poignant moments of introspection.

Tracks such as the scandalous (and often misinterpreted) “Barely Legal” and the clever “Alone, Together” make voyeurs of their audience. The album’s unquestionable sense of sexuality was initially advertised in its suggestive original cover art—which features a model’s nude buttocks and hip, upon which a black-gloved hand is placed. Taken by photographer Colin Lane, the image in question represents the album in a nutshell. The air of ultramodern voyeurism, devoid of color or romance, served as a visual companion to Casablancas’ vocals and lyrics. Whether intentional or not, the image is far less an object of titillation or shock than it is an embodiment of two distinct decades and cultures in transit—something of a visual supplement to the album. Soon after the album’s release, however, Lane’s photograph was replaced by a lackluster psychedelic image, selected by Casablancas, after the expected concerns of pushback from less enthusiastic lobbying groups and retail chains were raised.

Several fixtures endure as major Strokes classics, with “Last Nite” sounding conspicuously like Tom Petty’s own classic “American Girl.” Instead of inviting the rock giant’s ire, the song was met with amusement on Petty’s part, who later brought the group onto his 2006 tour as an opening act. “When It Started” was initially recorded as a replacement track for “New York City Cops,” which, due to its criticism of the New York City Police Department following the 1999 murder of the unarmed Amadou Diallo, was pulled from the tracklist of the U.S. version in the wake of 9/11—but “When It Started” managed to cement itself comfortably alongside the remainder of Is This It, serving as one of the album’s key tracks. “Take It or Leave It” adequately summarizes the journey taken through millennial New York, during that brief period of transition, just prior to 9/11, after which everything shifted once more. Here, the entire band comes together in a frantic flurry of paranoid mania, a raging Casablancas screaming his lungs out, repeatedly chanting the song’s title. The album ends on a disquieting note, leaving the listener desiring further conversation, which would eventually resume on 2003’s divisive Room on Fire.

Despite those who dismissed the band—pointedly Casablancas, whose father founded Elite Model Management, and Hammond, who is the son of acclaimed British singer/songwriter Albert Hammond—as privileged rich kids with no real connection to the streets they sang about, Is This It undeniably helped to set the mood of 21st Century popular music. Receiving widespread acclaim from fans and critics alike, and later being declared the greatest album of the ’00s by NME, the legacy of Is This It was assured and has continued to endure. The group have, for better or worse, remained active in the 20 years since their debut, having recently received their first Grammy Award for their latest album The New Abnormal. Nothing, however, has yet succeeded in returning them to their former glory, as something so monumental is not easily replicated. Twenty years later, Is This It holds up, still delivering influence and insight to a new generation of rock and roll fans. As one of those unique releases which somehow seems impervious to the wear and tear of time, as well as to the scrutiny of each passing generation, Is This It managed to blow the lid off of the ’00s indie scene, move popular focus away from the residual ’90s musical trends, and spawn a cavalcade of imitators. More impressive, however, is its continued relevance, the sound of which never seems to feel dated, as a staple of modern youth culture. Casablancas and his group succeeded in everything they set out to accomplish, having crafted what will undoubtedly go down as one of the greatest albums of the century.