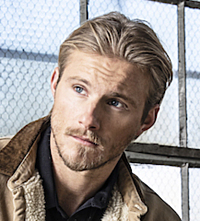 
NASHVILLE-based BBR MUSIC GROUP/BMG had signed actor/musician ALEXANDER LUDWIG to a global recording contract, and will release his self-titled EP on FRIDAY, MAY 21st. The five-song set was produced by KURT ALLISON and TULLY KENNEDY, both members of BBR label-mate JASON ALDEAN’s band. ALEXANDER has a writing credit on one of the EP’s songs.

The VANCOUVER native, who has been songwriting since age 12, previously released the track “Let Me Be Your Whiskey” last year. His acting credits include the films “The Hunger Games,” “Lone Survivor,” and “Bad Boys For Life,” as well as starring in the HISTORY channel television series “Vikings.” He is currently in production for new TV series “Heels” for STARZ.

“ALEXANDER is one of those rare individuals who excels at everything he does,” said BMG NASHVILLE Pres. JON LOBA. “A big reason is his work ethic. He never assumes anything will be handed to him and his music career is no exception. He’s been a long-time student of the genre, and put in the time over the last several years coming to NASHVILLE, spending time writing, learning from industry vets and honing his craft. When he first came to my attention, I was hesitant because often times when an actor or athlete wants to cross into music, it’s just a diversion or vanity project. BBR VP of Promotion LEE ADAMS assured me that wasn’t the case and pushed for a meeting. I’m so glad she did! ALEXANDER is not only a special artist, but a special human being, and I can’t wait for all our partners to meet him and hear his music. I like to say I signed him in spite of his acting career!”

“I’ve been drawn to Country music since I was handed my first guitar at nine years old,” said LUDWIG. “Life is about the journey, and I am so grateful to take these next steps in music with LOBA, BBR MUSIC GROUP/BMG and the community in NASHVILLE, and want to thank them for taking a chance and believing in me. I can’t wait to share this music that represents a taste of what I love about Country music.”

Watch a sneak peek of his new music here.