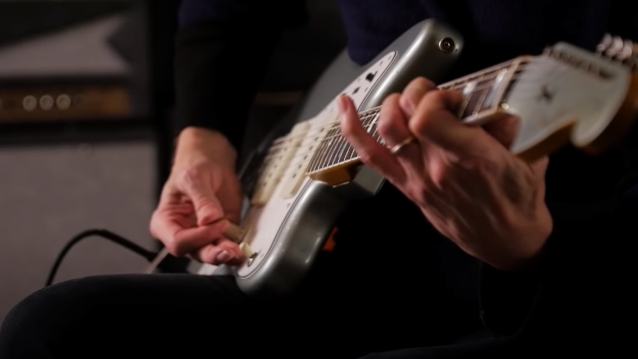 “You think about someone like the Edge. You hear a U2 song and if you turn off all the effects, you’re just playing a couple notes, and it’s probably not a great riff. You put all those effects on, and all of a sudden, you’re filling up an arena. You’re filling up a stadium with a wall of sound,” MINUS THE BEAR‘s David Knudson tells Reverb in the film. “So, effects add the dynamics and the intensity and sometimes make the song. Sometimes it writes the song for you.”

Through nearly 100 interviews, “The Pedal Movie” explores how an accidental sound made by a faulty recording console on a 1961 country song led to the creation of the first widely-produced fuzz pedal, which rose to fame with THE ROLLING STONES‘ “(I Can’t Get No) Satisfaction” and kickstarted the effects pedal revolution. The film follows how effects and popular music have influenced each other over time, from the pedals that inspired Jimi Hendrix‘s playing and the tones that defined LED ZEPPELIN and classic rock to the rhythmic wah sounds of 1970s soul and funk, the shimmering stadium rock of VAN HALEN, the effects that helped spawn shoegaze and alternative forms of rock music in the 1990s, and beyond.

“Over the years, effects pedals have shaped our favorite songs. Despite the wide-reaching influences of these tiny boxes, the full story of how they were created and how they evolved alongside the music they shaped has been largely untold,” said Reverb‘s Michael Lux, co-director of “The Pedal Movie”. “Effects pedals have not only been a source of inspiration for countless players over the years, but also they’ve provided a source of income for an entire industry of mostly small businesses working alongside their musical heroes. It’s an important part of music history that Reverb is uniquely positioned to tell based on our centrality to the builders, artists, and more who make up the pedal community.”

Today, there are thousands of effects and pedal brands on Reverb alone, and in 2020, Reverb saw nearly 50,000 searches a day for effects pedals. “The Pedal Movie” explores how the industry grew from a handful of companies several decades ago to a vibrant community that has helped create not only new songs and genres of music, but also new jobs for an industry of musicians and music fans.

“There are bands that I grew up listening to that are using [my] pedal,” Johnny Wator of Daredevil Pedals tells Reverb in the film. “It’s still just crazy for me to wrap my head around AEROSMITH or HIGH ON FIRE using something that I made and designed in my basement.”

“The initial inspiration for ‘The Pedal Movie’ was us asking how this strange little pocket of the music world grew into this massive community, with new pedals and companies continuously entering the fold,” said Dan Orkin, co-director of “The Pedal Movie”. “Today, there are thousands of builders churning out hundreds of thousands of pedals every year to an ever-growing community of music makers always on the lookout for new ways to express themselves. These little boxes have changed how people make music and ultimately, changed the course of popular music forever.”