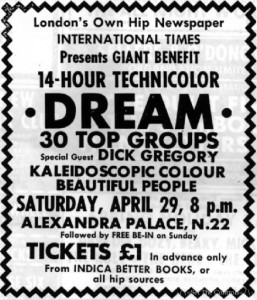 1967, The 14-hour Technicolour Dream benefit party for The International Times was held at Alexandra Palace, Muswell Hill in London. Seeing the event mentioned on TV, John Lennon called his driver and went to the show. Coincidentally, Yoko Ono was one of the performers. More than thirty acts appeared included The Move, The Pretty Things, Soft Machine, Tomorrow, The Flies, The Creation Arthur Brown, and The Graham Bond Organisation. All the bands played for free. Members of Pink Floyd drove all night from an gig in The Netherlands arriving at 3 AM, and taking the stage at dawn.  The entire event was documented by BBC Television.

1969, While working on tracks for the forthcoming Beatles Abbey Road album, Ringo Starr added his vocal to “Octopus’s Garden.”

1973, The Bay City Rollers appeared at The Odeon Theatre, Edinburgh in Scotland.

1975, After suffering the indignity of having an album rejected by their label, the Bee Gees release their career renaissance Main Course, featuring the disco hits “Jive Talkin’” and “Nights on Broadway.”

1976, After a gig in Memphis, Bruce Springsteen took a cab to Elvis Presley’s Graceland home and proceeded to climb over the wall. A guard took him to be another crank fan and apprehended him.

1977, The Grateful Dead played the first of five nights at the New York Palladium, New York.

1977, The Kinks appeared at the Maple Leaf Gardens in Toronto, Ontario.

1984, Yes appeared at the Civic Center in Erie, Pennsylvania.

1995, Rapper Tupac Shakur married Keisha Morris inside the Clinton Correctional Facility, where he was serving a four-year jail term for sex abuse.

2001, A blue plaque was unveiled at 38 Aubrey Walk, Kensington, London to honor the musical heritage of the address where British singer Dusty Springfield lived between 1968 and 1972.

2007, Arctic Monkeys started a three week run at number one on the UK album chart with their second album Favourite Worst Nightmare.