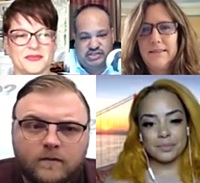 
Where can radio find the next generation of radio talent in the age of social media and podcasts, and how they can be coached, was the topic of discussion at the last session of the first day of the ALL ACCESS AUDIO SUMMIT 2021 on WEDNESDAY afternoon (4/21), moderated by RADIO ONE VP/Programming “COLBY COLB” TYNER.

“When you’re pulling talent from anywhere, whether it’s TIKTOK or YOUTUBE or whatever,” said talent coach and former programmer ANGELA PERELLI, “if you have people who have something to say and have their own life to bring to the show, there’s almost nowhere they can’t go.” She added that when bringing talent in from outside radio who did not grow up enamored with radio, “the first thing we need to teach them is how awesome radio is,” relating the impact on and connection with listeners. She noted the problem of hiring talent and not offering them coaching or direction, and, later, acknowledged that to experienced radio people out of work, the idea of discussing finding talent from outside the business might be off-putting, but she hoped it would encourage those out of work to hone their skills on social media to help them develop further.

Finding talent with the proper skill sets for a particular opening, iHEARTMEDIA Top 40 WIOQ (Q102)/PHILADELPHIA PD BRANDON “BUSTER” SATTERFIELD joked, is like POKEMON: “I’ve got all these different monsters in my pocket, and, depending on the situation and whatever needs to be done, I know which one to throw at it.”

RADIO ONE/HOUSTON OM TERRI THOMAS stressed the importance of looking at radio as one of several delivery platforms and the need to find hosts who can deliver effective content on all of those platforms; hosts who stand out between the music, she said, are more crucial than ever as the differentiation between radio and other music services. “It’s about having talent that can resonate and can be comfortable across a multitude of platforms” for the station brand as well as their own brand (“it’s a nuance thing” to create a balance between the two), THOMAS said.

Prolific podcast host LORE’L told how she went from hanging out with THE BREAKFAST CLUB (FRIDAY’s first-session guests) directly into syndication with the “MORNING HUSTLE” show, crediting being surrounded by experienced radio people to help her learn the process and find a balance between what she does on podcasts and what works on the radio. “The best combos in radio,” THOMAS added, “are a combination of vets and newbies.”

SATTERFIELD said he hires based on looking at his entire station lineup and assessing the greatest need, then knowing when to “back off and let something happen,” trusting the talent. On being approached by veteran hosts touting their resumes and ratings track records, THOMAS said, “This is a skill set game. You have to have quantifiable skill sets and you have to show you can move the crowd in what today’s competitive landscape is,” namely ratings and revenue. She also stressed the importance of looking for people who do not “fit the mold,” digging into a host’s interests for compatibility with the station’s overall image; “If all you can do is sit there and tell me about the gossip of the day,” THOMAS said, “I really don’t need you.”