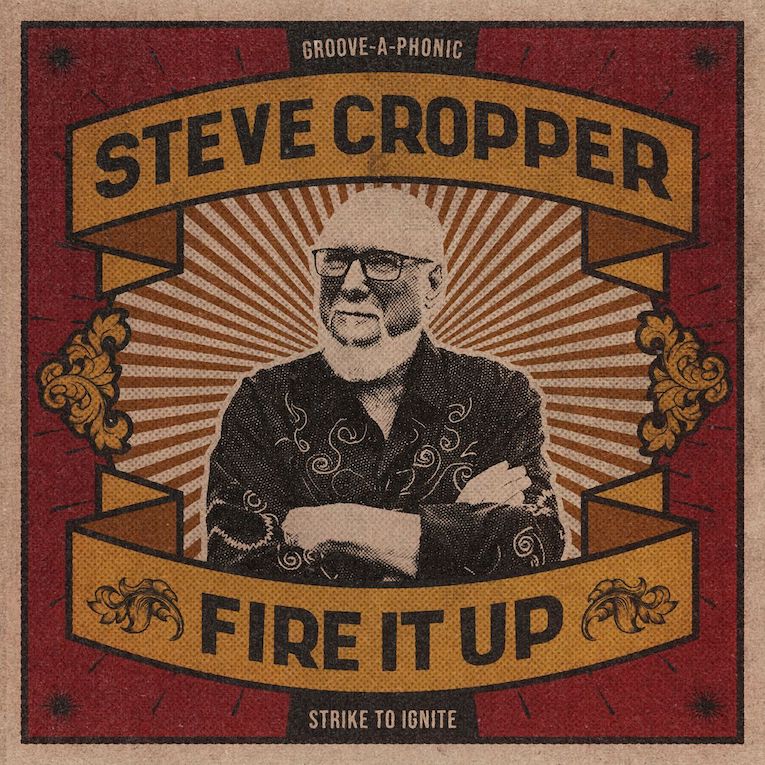 Bona fide guitar legend Steve Cropper is set to kick out the jams on his new solo album Fire It Up. The record comes out April 23rd, 2021 thanks to Mascot Label Group/Provogue and is surprisingly Cropper’s first proper solo outing since 1969. Cropper is seven decades into his career but feels that Fire It Up is different from any of his past work. Based in sessions with the Rascals’ Felix Cavaliere and co-produced with long-time collaborator Jon Tiven, the set is built upon old grooves that Cropper has been developing for years and decided to execute as a way to keep working during our ongoing COVID-19 pandemic. Of course, those grooves contain a ton of the tightly focused rhythm guitar work Cropper is continually lauded for as well as showing fans more of what he’s about as a producer and arranger. The album is a mountain of Cropper’s Memphis-style coolness and fun and will satisfy anyone looking for new music that just feels great.

Two-time Grammy Award winner, Steve Cropper, of course, needs no introduction to anyone who has paid attention to American music since the 1960s. As a member of Booker T. and the MGs, Cropper played on the band’s own instrumental hits like “Green Onions” as well as countless sessions as the house band for Stax Records backing up the label’s stars. He’s one of the most prolific guitarists, songwriters, and producers out there and had a hand in creating mega-hits like “Midnight Hour” by Wilson Pickett, “(Sittin’ On) The Dock of the Bay” by Otis Redding, “Soul Man” and “Hold On I’m Coming” by Sam and Dave, and many others. His distinct guitar work can be heard on John Lennon’s Rock N Roll album, Frank Black’s Honeycomb and Fast Man Raider Man albums, and on several albums by Ringo Starr. He’s also produced for John Prine, Jeff Beck, and John Cougar Mellencamp. He was a founding member of The Blues Brothers, as well, and acted in the eternally-popular movie they made. Simply put, he’s been everywhere and you’ve been listening to him your whole life.

Cropper starts his party with the brief and funky “Bush Hog Part 1.” The track is a deep, mid-speed groove that features everything the world loves about his playing. It sports a killer riff, tasty tones, and the kind of sliding double-stop licks that are part of his signature sound. Cropper’s title cut, “Fire It Up,” is a stone classic with a big R&B pocket and vocals from the outstanding Roger C. Reale. As always, Cropper is at his best working in an ensemble behind a cool singer and he doesn’t disappoint. The entire band unites in support of Reale and the results are mesmerizing.

“One Good Turn” is a mellow soul ballad with a smooth, restrained sound that’s heartfelt and true. Cropper plays a beautiful and melodic solo in the middle that demonstrates his economical style of phrasing and his masterful big-picture approach. The horn-drenched “Far Away” is another gritty boneshaker with a big-time beat that hits you right in the hips. Cropper is the king of this sound and every note he plays hits dead on target. “The Go-Getter Is Gone” is a co-write with vocalist Reale and brings us a tough pocket, more horns, and lyrics that many will relate to. Other highlights on Fire It Up include “Say You Don’t Know Me,” “She’s So Fine,” and “Heartbreak Street.”

Steve Cropper is the ultimate band member but this solo effort shows fans his considerable power as a leader and producer. He’s one of the most important musicians still working today and is as crisp and influential as he ever was. Anyone who loves real soul music needs to spin Fire It Up and fill their ears with perhaps the most understated genius the USA has ever produced. This is the good stuff.

Listen to “Fire It Up”

Pre-order link for Fire It Up