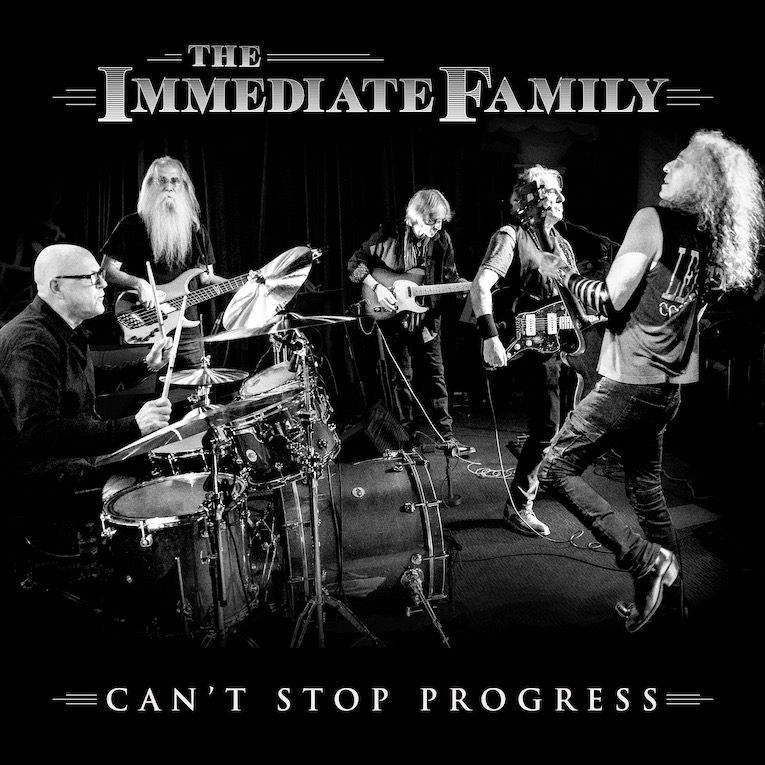 Legendary session band The Immediate Family drops its sophomore EP You Can’t Stop Progress on Friday, April 23, 2021 via Quarto Valley Records. Made up of all-star players Danny Kortchmar (guitar and vocals), Waddy Wachtel (guitar and vocals), Leland Sklar (bass), Russ Kunkel (drums) and Steve Postell (guitar and vocals), the group is a top-flight rock and roll outfit in the classic sense that gets under the hood of their original songs as a cohesive unit. Speaking of songs, we only get five of them on this new set but each one is fresh, ready, and a gem. It’s little wonder that these musicians who have individually and collectively worked with stars like Jackson Browne, James Taylor, Linda Ronstadt, Stevie Nicks, Keith Richards, Warren Zevon, Graham Nash, Neil Young, and David Crosby have some pretty fly tunes of their own. It would be more of a shock if they didn’t.

The EP is meant to be, among other things, a bridge from The Immediate Family’s debut effort, another EP titled Slippin’ and Slidin’, to the band’s hotly-anticipated first U.S. LP, also on Quarto Valley Records and an upcoming documentary by filmmaker/director Denny Tedesco. The tracks here certainly do whet the appetite for a longer record to come but they also stand tall on their own. The record kicks off with its title cut “You Can’t Stop Progress,” a gravelly blast of heavied-up garage rock with a pounding groove and socially relevant lyrics. It’s a brilliant track that’ll catch anyone expecting the kind of California songwriter material these guys have made with their famous bosses by surprise. Tough, sweaty, and lean, it makes a perfect opener.

Up next is the more chilled-out pop/rock of “One More Time Or Two.” It’s a gentle bit of vintage melodic pop songwriting that channels most of the great things about 70s radio. It has a subtle hook that’s quite impressive in its ability to lodge itself in your headphones and a sweet mid-tempo pocket that vibes like a sunny day. “3:45 Coming Through” is a swampy blues/rock number with a chugging feel and another killer hook. This one also spotlights Kortchmar and Wachtel on guitar and lets the two of them take us to tone and phrasing school.

“Easier” is a gentle ballad with a sweet disposition and a touch of Beatlemania around the edges. It really shows the depth of this band and the members knack for being memorable at any level of intensity. “Machine Gun Kelly” is a bouncy narrative track with a Southern Rock heart. It was recorded live and shows how mighty an assemblage of players this group truly is. The slide guitar work on this one is particularly enjoyable. The Immediate Family is a superb group of rock music’s finest musicians that will quickly find its way into your daily listening. You Can’t Stop Progress will pull you in upon first contact and keep you hanging out for all that’s yet to come. Highly recommended.