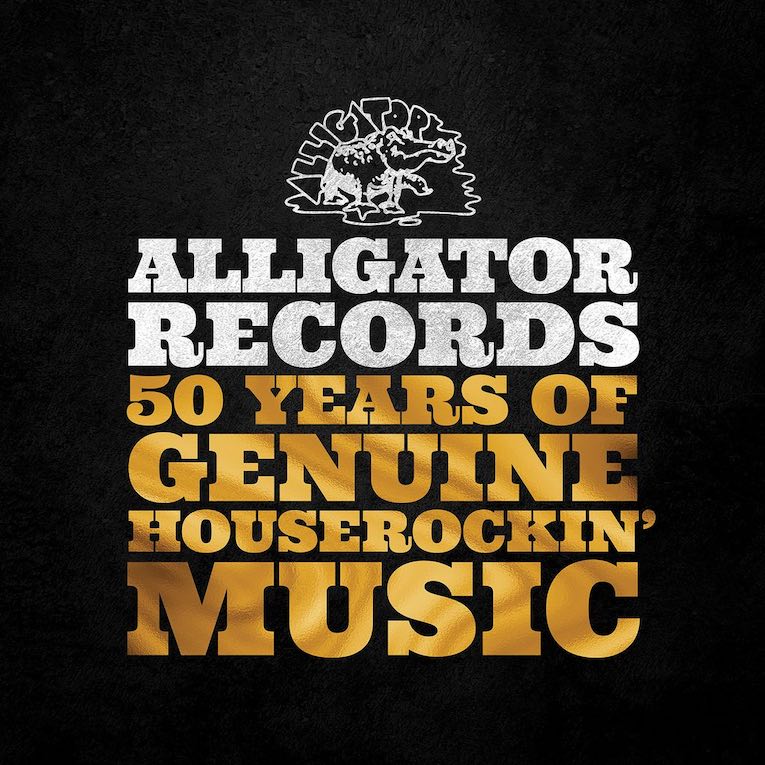 On Friday, June 18, Alligator Records will celebrate a half-century of recording history-making blues and roots rock with the release of Alligator Records — 50 Years Of Genuine Houserockin’ Music. Both the 24 song gatefold two-LP set (over 100 minutes of music) and the 58 song three-CD set (over 230 minutes) clearly lay out label founder and president Bruce Iglauer’s wide-ranging, forward-looking vision. The collection — with richly detailed liner notes written by Iglauer himself — highlights Alligator’s extraordinary past, headline-generating present, and a future dedicated to nurturing new generations of blues artists and fans.

Alligator Records stands as one of the most enduring and revered independent blues labels in the world, its catalog holding inextinguishable works.” –The Chicago Tribune

“From the moment I walked into Florence’s Lounge, sheets of distorted electric guitar filled the room. I could hear the unmistakable sound of steel on steel as a slide tore up and down the strings. Drums pounded out a shuffle beat so infectious and elemental that even I could dance to it… That afternoon I fell in love with Hound Dog Taylor & The HouseRockers.” —Bruce Iglauer from Bitten By The Blues: The Alligator Records Story

Fifty years ago, 23-year-old blues fan Bruce Iglauer spent his meager savings to record an LP by his favorite Chicago blues band, Hound Dog Taylor & The HouseRockers, and founded Alligator Records to release it. Today, Alligator boasts a catalog of over 350 titles, many of which are renowned, award-winning, time-tested classics of the genre. Alligator Records’ artists and recordings have received a total of 48 Grammy Award nominations and three Grammy Awards, over 150 Blues Music Awards (the blues community’s highest honor) and over 70 Living Blues Awards (presented by Living Blues magazine). The label’s artists have appeared on radio, on television and in films. They’ve performed worldwide at clubs, concert halls and festivals, with Alligator’s support promoting and publicizing each and every gig.

Since releasing that first Hound Dog Taylor record, Alligator Records — with the invaluable input and guidance from the 14-person staff (many of whom have been with the label for more than 25 years) — has become the most successful blues label in the world. And the Alligator story is still unfolding. From the early days of recording only Chicago talent, to attracting national and international musicians, to the label’s commitment to nurturing the new generations of blues and roots artists, Alligator, like the blues itself, continues to break new ground while staying true to its roots. Alligator Records — 50 Years Of Genuine Houserockin’ Music is a must-hear collection for lifelong fans as well as for those who have just discovered the endlessly uplifting, life-affirming, deeply soulful, roots-rocking, healing power of the Genuine Houserockin’ Music on Alligator Records.