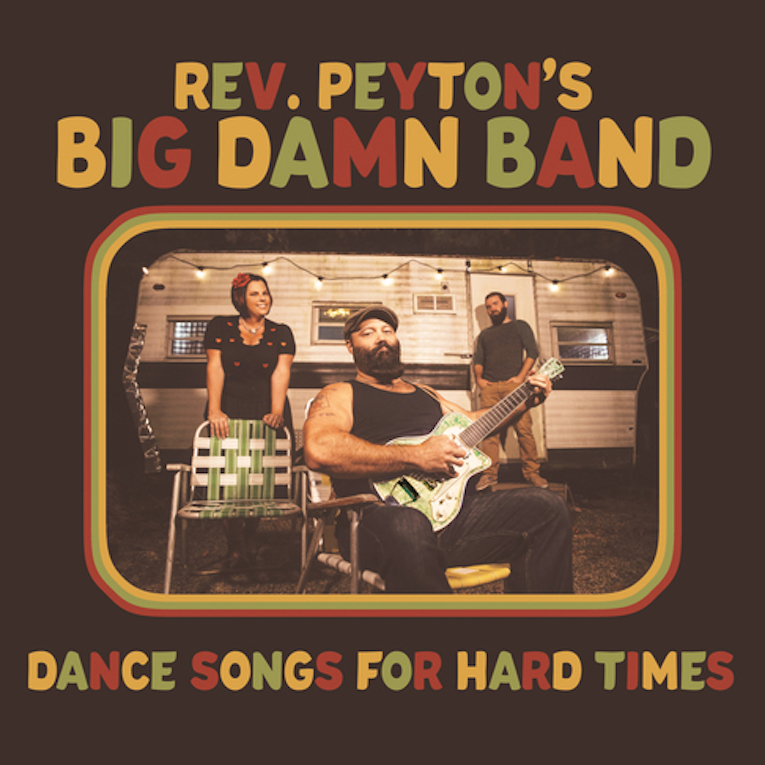 Reverend Peyton’s Big Damn Band roars into 2021 with Dance Songs for Hard Times, a new record that throws it all the way back yet is still 100% up to date. Scheduled to be released April 9th, 2021 via Thirty Tigers, it was written by candlelight, tracked on Eisenhower-era gear, and is packed to the rafters with hip-shaking country blues/rock songs that tell tales of hope, fear, and pandemic living. The album was recorded in Nashville with producer Vance Powell (Chris Stapleton, Jack White). At Powell’s request, Reverend Peyton took a fully old-school approach to the sessions by using only eight tracks, doing few overdubs, and capturing his voice and guitar live in the studio at the same time. The resulting album crackles like a live power line while also dealing with topics including bleak financial situations, missing the presence of loved ones, and asking for God’s mercy.

For those not yet hip, Reverend Peyton’s Big Damn Band is the greatest front-porch blues band in the world. The group is a three-piece crew made up of Reverend Peyton on vocals and fingerstyle electric guitar, his wife “Washboard” Breezy Peyton on washboard, and Max Senteney on drums. They’ve made an art out of sounding bigger than they are and crank out house-rocking music that’s found fertile soil everywhere from the blues circuit to The Warped Tour.

Before being sidelined by the ongoing Covid-19 pandemic, the group had taken their show to almost 40 countries and built their crowd and reputation one gig at a time. Covid stress and other personal issues pushed an entirely new batch of songs out of the Reverend in March and April of last year while he watched the world fall apart from his rustic home in southern Indiana. The new songs demanded to be brought to fruition so Dance Songs for Hard Times was born.

Peyton gets right to the point from the jump with the rocked-up country shuffle “Ways And Means.” It’s a hard-edged tribute to everyone struggling with the deadly combination of great ideas and no backing to bring them to life. “The song ‘Ways and Means’ was written for all those folks who have the moves, the style, the substance, the talent, but maybe not the seed money or the famous last name,” Peyton said, “All those people who had to work extra hard because they didn’t get to start way ahead. Folks who have been playing catch-up since they were born and had to get really good just to make it to zero.” He shouts the blues out of the sky with substance and fervor while shooting sparks out of his amp with hot licks and a slashing tone on the track while Breezy and Max drive the groove straight down the road. The song is a perfect opener and instantly conveys the fact that some cool music is about to happen.

“Rattle Can” is uptempo, frantic, and glorious, delivering an experience that rides the line between dirty blues and backwoods rockabilly. Peyton’s slide guitar churns out percolating rhythms and squalls of epic high notes that go screaming off into the night air, leaving listeners amazed and exhausted. He is absolutely one of those wild-eyed, renegade visionaries that America used to breed in bunches but have become unfortunately scarce in modern times. He lives at the intersection of Muddy Waters, Little Richard, Screamin’ Jay Hawkins, and Bo Diddley but packs enough of his own original body blows to always be his own man.

On “Too Cool To Dance,” Peyton tears into some righteous 50s-style rock and roll that finds him ripping Chuck Berry licks with his fingers while simultaneously kicking a bass line with his thumb. Applying this sort of acoustic fingerstyle thinking to his electric playing gives the Reverend a ton of identity and is the basis for his highly developed guitar style. “Crime To Be Poor” is a heavy, lowdown blues song about how rich and poor people are treated in the USA. Peyton digs into social issues we hear about every day with both his voice and guitar over a thumping beat that drives his message home.

The album is tight all the way through, so don’t overlook gems like “Nothing’s Easy But You And Me” and the final song “Come Down Angels.” Reverend Peyton’s Big Damn Band is one of the top groups in roots music today and Dance Songs for Hard Times is the record we all need right now, one that acknowledges what’s happened but still has what it takes to glue us back together. Play this one loud and set your soul free.