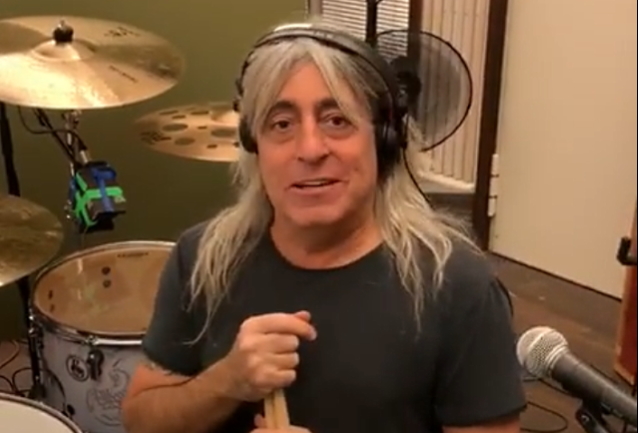 Former MOTÖRHEAD and current SCORPIONS drummer Mikkey Dee revisited his KING DIAMOND days by playing the intro to the song “Welcome Home” for a video posted to his official Facebook page. In introducing his performance, Dee stated about the song, which originally appeared on KING DIAMOND‘s 1988 album “Them”: “I got so many requests, the whole time, about the intro to ‘Welcome Home’ with KING DIAMOND that we once upon a time did. I barely remember it, but it’s a good one. And I’ll play it for you. I get requests all the time. And it’s really not a complicated one, but it fit that time for that song. So, here we go. I’ll play it for you. Check it out.”

Three months ago, Dee, who played drums for KING DIAMOND from 1985 until 1989, told Cassius Morris of “The Cassius Morris Show” in an interview that he would like to take part in a reunion tour featuring the surviving members of the band’s original lineup. “Unfortunately, [original KING DIAMOND bassist] Timi Hansen is dead, but you could have Andy [LaRocque, guitar], Michael Denner [guitar], you could have Hal Patino [bass], Pete Blakk [guitar], myself, just for a tour, and only play the stuff that we did — from ‘Fatal Portrait’ to ‘Conspiracy’,” he said. “That could have been a really fun and successful tour.”

Dee, who has been a member of SCORPIONS since 2016, went on to say that it’s “totally up to” KING DIAMOND‘s namesake frontman and leader as to whether such a tour will ever take place. “Because he [also] does MERCYFUL FATE [on the side],” Mikkey said. “I don’t see why not. If I’m off [and not doing anything] with SCORPIONS, then I could easily have done that. That would have been so much fun, I think, because we were a great bunch of guys. And I still talk to Andy and Pete and Hal and King as well.”

The Swedish-born drummer, who also played with MOTÖRHEAD from 1991 until the band’s dissolution in December 2015, previously reflected on his time with KING DIAMOND in a 2017 interview with “The Blairing Out With Eric Blair Show”. He stated at the time: “We started as a bunch of kids, really, and we created something. To tell you the truth, we really didn’t know what we did. Well, we knew what we did, but [we weren’t aware of the fact] that we created a style. But we had so much fun, and [we were] a bunch of friends touring. It all came to an end, where I didn’t feel very happy in the band anymore. We were going in a little bit different direction than I thought that we’d been working ourselves up to. And me as a drummer, I like to play everything. I play big band jazz, fusion, pop, blues, rock, heavy metal, speed metal… So, to me, it was a natural move. I wanted to play some more straight-ahead rock and roll, and I felt a little stressed in KING DIAMOND in the end, maybe.”

Asked how he felt about the Satanic overtones of the KING DIAMOND lyrics and image, Mikkey said: “It wasn’t that bad at all. King believes in the occult — more Stephen King kind of stuff. And for the rest of the four of us, we were not so much into that. But it was great music, great camaraderie, great lyrics — great. Then King‘s personal belief was his deal. Just like I never got into Lemmy‘s personal vision. If you’re a band, you’re four or five or three people — whatever you are. Everybody has their own vision and their own belief in how life is or wherever you’re gonna go. And the trick is to get that to work together without people getting angry or disagreeing. And luckily, with KING DIAMOND, we had great teamwork.”

Dee played on the classic KING DIAMOND albums “Fatal Portrait”, “Abigail” and “Them” until he left in 1988 to join Don Dokken. He returned a year later as a session player on KING DIAMOND‘s “Conspiracy”.

KING DIAMOND‘s current drummer is Matt Thompson, who has been in the band since 2000.

KING DIAMOND received a Grammy nomination in the “Best Metal Performance” category for the track “Never Ending Hill” off the group’s last album, 2007’s “Give Me Your Soul … Please”.

Requests keep coming so here it is again!