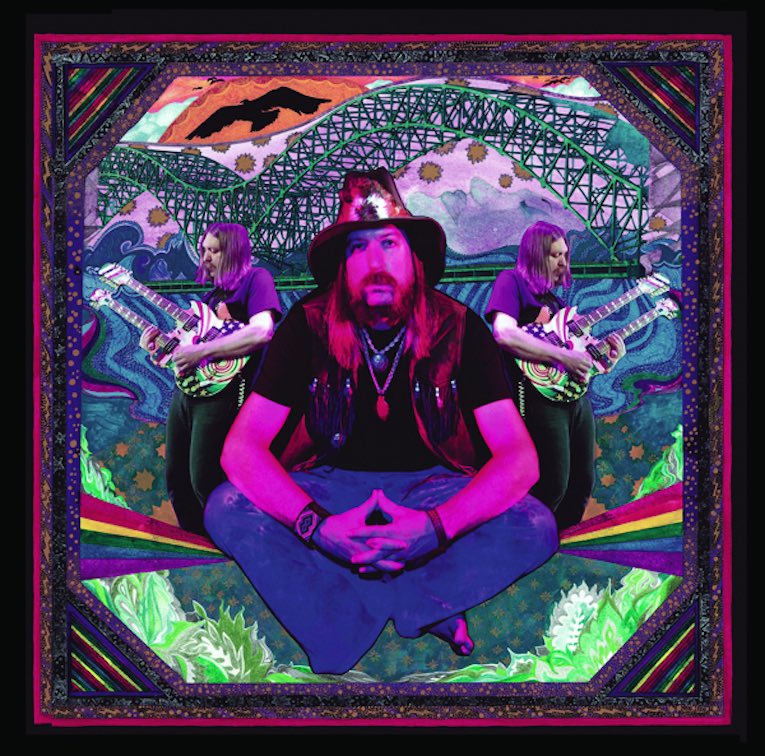 Exquisitely talented Memphis guitarist and songwriter Robert Allen Parker delivers better than two dozen reasons to become a fan of his new double album The River’s Invitation. Released on March 26th, 2021 thanks to Broken String Records, the record is an overwhelming showcase of both Parker’s skills and those of many other incredible musicians from the Memphis underground who were chosen to appear on these sessions. They’re the finest blues, rock, psych, soul, folk, funk, and indie rock players the city has to offer and they form an unbeatable supporting cast for Parker’s expansive and ambitious creative vision. His nuanced, articulate guitar work and tight songwriting have never sounded better and the intensely grooving band behind him gives Parker the fuel he needs to catch big air on every track.

Robert Allen Parker is a veteran of Memphis’ ultra-creative midtown music scene as well as the downtown blues community in possession of a guitar vibe influenced by Eric Clapton, Steve Marriott, Jimi Hendrix, Leslie West, and Duane Allman. He’s played with national and historic artists including Rufus Thomas, Denise Lasalle, Luther and Cody Dickinson (North Mississippi Allstars), Valerie June, members of the Bar-Kays (Stax Records), and the Hi Rhythm Section (Hi Records). He’s well-versed in electric, acoustic, and slide playing, able to craft attention-commanding songs, and is often seen as a keeper of the tradition of true Memphis guitar sounds. Parker is a major talent on all levels and should be considered one of the leading figures in modern American music.

The River’s Invitation kicks off with the driving, tension-filled instrumental “The Sound Of A Revolution.” It’s an excellent and energetic first track that gets the blood flowing and foreshadows the creative tsunami following behind it. The cut has a distinct early 70s attitude and channels the horn-based rock sound of that period in a way that’s exciting and fresh. Parker also tackles the traditional gospel classic “Jesus Is On The Main Line” and gives it a haunting, swampy treatment that will infiltrate your soul. His slide guitar tones are hard and beautiful and give Parker’s version of this eternal standard its own life and legs.

“My Life Comes From A High Place” is a brilliant psychedelic rock/soul jam featuring a powerful performance from lead vocalist Kennard Farmer. Parker’s guitar work here is action-packed and aggressive, always pushing the groove forward before bursting into his solo. Written by Chubby Checker, the song becomes a crowd-mover in Parker’s hands and gives listeners a righteous experience that won’t be soon forgotten. “Skydog (Tribute To Duane Allman)” is a heartfelt tip of the instrumental hat to one of the main influences on Parker’s guitar style. It’s an emotional, musical journey that dives deep into the Allman Brothers’ universe and comes out covered in love and respect. It’s a perfect moment that will linger in your ears.

“Indian Dream/1 Way 2 Fly” is a two-part affair that begins as a mellow multicultural instrumental before abruptly launching into an uptempo, psychedelic rock second half. Parker clearly has a handle on his genre-mixing sensibilities and makes the melding of these two distinct styles seamless and engaging. “Sweet Thing” is a Parker original with a lowdown blues/rock heart voiced by sultry Canadian vocalist Lahna Deering. It’s a dark-toned song that lives somewhere between CCR’s “Run Through The Jungle” and The Doors’ “Riders On The Storm” that also benefits from the presence of backup singers Candice Ivory and Hope Clayburn. It’s among this set’s best tracks and that’s saying a lot.

There are a lot of killer songs on this extra-long joyride but be sure to wrap yourself around “Copperhead Boogie,” “If The River Was Whiskey,” and “Black Magic Carpet Ride.” Robert Allen Parker is a giant in the making and refuses to let the modern internet attention span inhibit his rise to greatness. Dial up The River’s Invitation, settle in, and become one with every bit of this inspiring release.

Listen to “My Mind Comes From A High Place”

Order link for The River’s Invitation