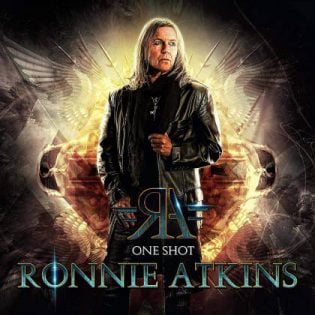 06. Before The Rise Of An Empire

11. When Dreams Are Not Enough

If it’s diehard and dedicated you want, RONNIE ATKINS has been fitting the bill for four decades. His ongoing battle with lung cancer has obviously made the release of his first-ever solo album a somewhat double-edged sword for all concerned, but if you’ve ever enjoyed PRETTY MAIDS — and Ronnie‘s gloriously rough-hewn but soulful voice in particular — then “One Shot” is both firmly within the same wheelhouse and sufficiently distinctive to set the great man’s solo work apart from the 16 albums he’s made with Denmark’s hard rock kings.

Ultimately, Ronnie Atkins is a great singer, and “One Shot” is full of great songs. With melodies permanently front and center, and sound that runs the gamut between sparkly AOR, gritty melodic metal and even a muscular but skinny-hipped strain of power-pop/rock “Scorpio” sounds more like THE WILDHEARTS than PRETTY MAIDS, for a start, and it’s that unexpected frisson of cool that makes the best moments here positively zing with energy and charisma. That said, the more traditional tunes here are just as absorbing in their own, endearingly straightforward way. The title track is a blustery power ballad with a hook that will lodge in your eyeball and drag you down the street; “Subjugated” is absurdly catchy, sounds like a long, lost gem from the ’80s and is, in reality, a far better song than anything BON JOVI have released in 20 years; “Frequency Of Love” is bittersweet and utterly classy radio rock, with one of those slowly rising chord sequences that nearly always precedes a killer chorus (which, of course, it absolutely does here). Elsewhere, “Before The Rise Of An Empire” takes the bombast of symphonic metal and welds it to an irresistibly sparky pop melody; “Miles Away” is another powerhouse ballad, underpinned by an almost gospel-like clangor; “Picture Yourself” veers from new wave verse to AOR chorus with seamless panache; “One By One” is punchy with pomp-rock power but blessed with a beautiful arrangement, lush vocal harmonies and, again, a chorus so huge you might reasonably mistake it for a sperm whale. Breezy but bruised big finish “When Dreams Are Not Enough” is equally great. The whole thing flies by in a snappy and shrewd 45 minutes, and the most lasting effect is to make you wonder why it took this long for Ronnie to make a solo record. It really is that good.

Loud, proud and heroically melodic, “One Shot” proves that you can’t keep a good legend down, and that Ronnie Atkins still has one of the coolest voices in hard rock and heavy metal. More power and the best of wishes to him.