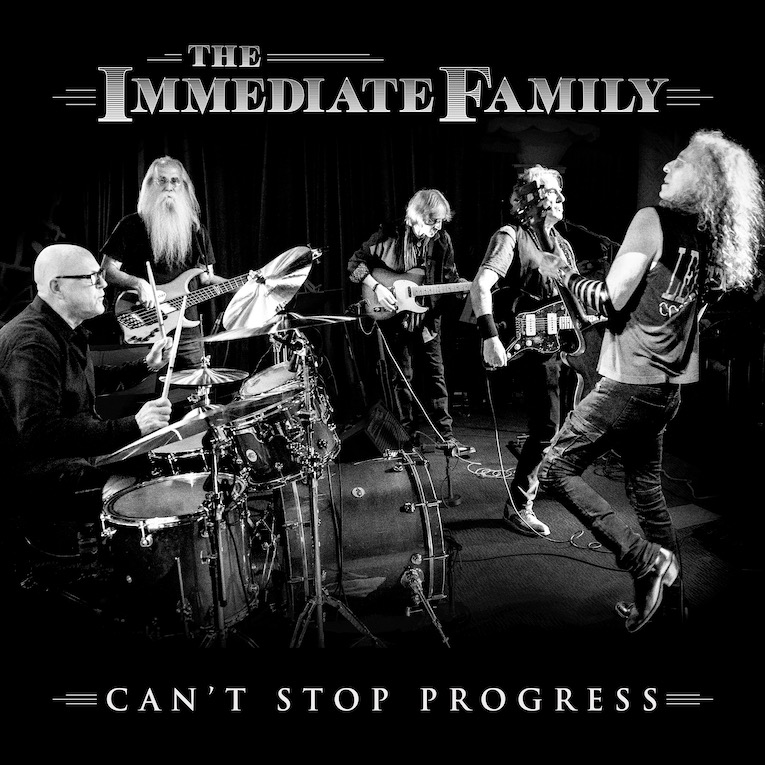 The Immediate Family lights up and goes all in on the band’s edgy new single “Can’t Stop Progress.” Made up of renowned studio musicians Danny Kortchmar (guitar and vocals), Waddy Wachtel (guitar and vocals), Leland Sklar (bass), Russ Kunkel (drums), and Steve Postell (guitar and vocals), the group rocks on this socially relevant and gravelly track that takes on the inevitable challenges of modern life. This crew helped define the sound of the last 40 years of rock music with Jackson Browne, Linda Ronstadt, James Taylor, Warren Zevon, and other major stars, and is clearly nowhere near done with that process.

No surprise to fans of these superb musicians, the musicianship is extraordinary, but the songs themselves on Slippin’ and Slidin’ and the new single, include well thought out lyrics that actually mean something. This band writes insightful lyrics about complex relationships and society and zeros in on important issues that include poignant storytelling.

Building on the success of the Immediate Family’s first US EP, Slippin’ and Slidin’, released fall of 2020, the new EP, Can’t Stop Progress gives fans of the band a deeper look into their music. Featuring five original songs by the band, the upcoming EP is a bridge to their much-anticipated debut LP on Quarto Valley Records, in addition to an upcoming documentary by filmmaker/director Denny Tedesco.

About The Immediate Family
The Immediate Family (the modern iteration of a legendary studio ensemble known as “The Section”) is a rock and roll band composed of four of the most recorded, respected and sought-after players in modern music: Danny Kortchmar (guitar and vocals), Waddy Wachtel (guitar and vocals), Leland Sklar (bass), Russ Kunkel (drums) and the addition of prominent touring, session guitarist and songwriter Steve Postell (guitar and vocals). Frequent collaborators both in the studio and on-stage, their work can be heard on albums from Jackson Browne, James Taylor, Linda Ronstadt, Stevie Nicks, Keith Richards, Warren Zevon, Graham Nash, Neil Young, David Crosby and many, many more. Kortchmar, Sklar and Kunkel have worked together since the early 70s and made up three-quarters of The Section, best known for both their studio and live work in support of some of the top selling singer/songwriters and solo singers in the history of music, as well as their own acclaimed instrumental albums. Collectively, these musicians helped define the sound of a generation.