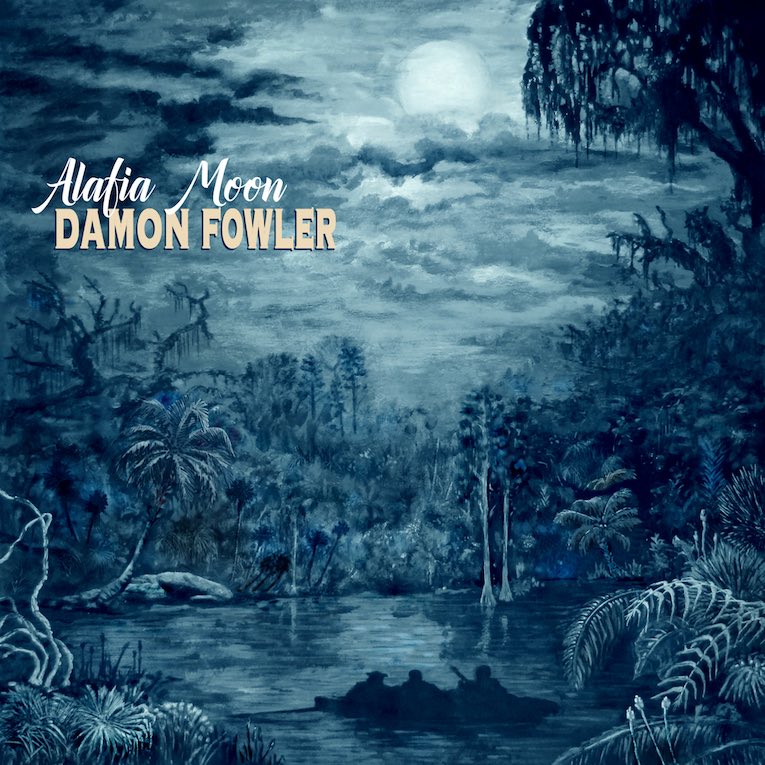 Florida-based blues/roots rocker and master guitarist Damon Fowler returns with the release of his new album, Alafia Moon. This outstanding collection of mostly original songs adds to the impressive catalog he has created and includes elements of blues, soul, swamp rock, country and R&B. Alafia Moon is set to drop on March 26, 2021 via Landslide Records.

Fowler hails from Florida’s Gulf Coast, a region with a deep musical history. Legendary musicians such as slide guitar master Tampa Red and jazz great Cannonball Adderley came from this part of the world, as did rock legends Dickey Betts (Allman Brothers Band) and The Outlaws. Playing professionally since he was a teenager, Fowler is an exceptional guitarist and accomplished slide player. Critics have compared him to legends such as Johnny Winter, Jeff Beck and Duane Allman and he has worked with Winter, Beck, Buddy Guy, Gregg Allman, Robin Trower and others. Fowler’s musical talents are well-respected by his peers, as shown by his membership in both the Butch Trucks Freight Train Band and The Dickey Betts Band. Fowler also was part of the roots supergroup Southern Hospitality, along with Grammy nominee Victor Wainwright and 2021 Blues Music Award nominee JP Soars.

“Leave It Alone” opens Alafia Moon with a swampy vibe and a lyric about minimizing the impact of regretful decisions. Fowler’s laid back, soulful vocals ride the infectious groove laid down by the rhythm section and his tough-toned guitar riffs paired with Carr’s soul-drenched harmonica light up the track. Vocal harmonies between Fowler and Betty Fox fill out the song and add to the groove. These vocal flourishes appear throughout the album and elevate the tracks here beyond a typical blues/rock format. True to Fowler’s calling card, his melodic guitar solo isn’t flashy but fits perfectly within the contours and feel of the track. It serves the song, not the player. In this respect, Fowler brings to mind the legendary Paul Kossoff, a player with the rare ability to understand subtlety and the importance of the space between the notes.

The title track “Alafia Moon” finds Fowler in fine vocal form. His raspy, expressive voice ushers in emotion and passion in what is clearly a personal song about the Alafia River near where he grew up. It’s a slow, bluesy number enhanced by Fowler’s outstanding guitar picking. Organ licks by Kach and backing vocals by Fox give the song a beautiful gospel flavor. The song finds the narrator searching for purpose and positivity in these dark and troubled times.

“Some Things Change” is a hard-charging roots rocker that opens with a sizzling Fowler guitar riff paired with Carr’s driving harmonica. Carr and Fowler play off one another throughout the song, creating a raucous wall of sound. Fowler’s smoky vocals and harmonies with Fox make this story about leaving a troubled relationship one of the album’s best moments.

Fowler’s exceptional talent on guitar serves “Taxman,” a blues number about an unwanted visit from the tax collector. His vocals work out against hot lead riffs and tasty slide playing and create a sonic landscape perfect for such a relatable song.

The lone cover song on Alafia Moon is a well-chosen version of “The Guitar” by legendary songwriters Guy Clark and Verlon Thompson. It’s a powerful story song about a visit to a pawnshop and an old guitar hanging on the wall. Fowler’s rendition is fully his own and does justice to the spirit of the original while hitting the lyrical twist at the end just right.