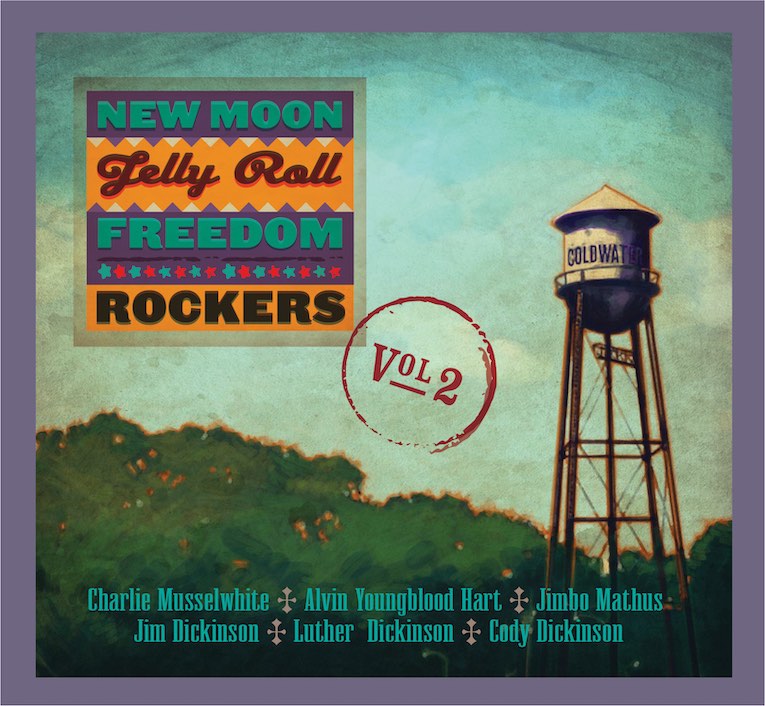 For those who don’t know the story, these tracks were laid down in 2007, when the aforementioned blues players sat in for an extended jam session with the tape rolling. For more than 12 years, those recordings’ existence was mentioned only obscurely in interviews, and referenced as a great old-school recording by those few witnesses. It was recorded live off-the-floor over several days, where the musicians all sat in one big circle in the studio and played quietly amongst the microphones, taking turns singing out in the room and improvising on the spot. Since Jim Dickinson’s passing in the summer of 2009, the recordings just hung out in the archives. When Stony Plain Records founder Holger Petersen heard about the sessions in 2019 and expressed his enthusiasm to release it, Luther Dickinson and his partner/engineer Kevin Houston finished the production of the albums.

Vol 1, to my ears, was a sure-fire contender for blues album of the year, and so the unveiling of further treasures is an event to be savoured.

Charlie Musselwhite takes center stage on opener “Blues For Yesterday,” a fine, down ‘n dirty blues shuffle, with Musselwhite’s timeless, raw vocals and astonishing, visceral harp. The rest of the musicians provide a wonderful backing of rolling drums and swirling guitars. This is a treat for any ears. The spontaneous, “live” feel and relative lack of production lends this track, and the whole album, a thrilling immediacy. When Musselwhite starts up on one of those rasping, gliding harp runs, all you can do is lay back, close your eyes and float away. The term “supergroup” gets bandied about more than it deserves, but in terms of empathetic playing and sheer joy, the New Moon Jelly Roll Freedom Rockers are up there with the best.

On “She’s About A Mover,” Alvin Youngblood Hart serves as point-man for a delicious stew of 60s-sounding, jangling blues-rock. Reminiscent of that eras’ great acts, such as The Beatles and early The Who, this cut shines with effortless enthusiasm and first-class musicianship. It’s hard to not smile as Youngblood Heart serves up a concoction of classic lyrics which draw inspiration from simpler times when raw sexuality was served up in a decidedly more veiled manner (and no less relatable for it). Jimbo Mathus takes the reigns for “Searchlight,” which leads us back into straight up twelve-bar territory. If Chicago Blues is your thing, “Searchlight” is a track you should be listening to. The band conjures up that ecstatic blend of muscular tightness and supple laid back grooves. An extended instrumental blow-out is a particular highlight, as the players whip up a storm.

It’s Jim Dickinson’s turn under the spotlight on “Blues Is A Mighty Bad Feeling,” a slow, dusty blues which flows wide and deep like the Mississippi itself. There’s a poignant bit of studio chatter included at the start, which is especially moving as Dickinson sadly passed away a year after these recordings. This is a track for baking hot, lazy days. It sizzles and crackles with whimsical pathos. Musselwhite’s languorous harp threads the whole together into a hazy dream. “Blue Guitar,” on which Luther Dickinson leads, is as potent a slice of slow-burning blues as you could ask for. There’s some quite beautiful interplay between the assembled musicians, with snaking, intertwined guitars, as the group stretch out for a lengthy instrumental exploration. This cut sounds like the distilling of every decade and facet of the blues itself. It’s a moaning, exquisite and shimmering masterpiece.

For those of you who missed out on New Moon Jelly Roll Freedom Rockers Vol 1, I would urge you to pick up both of these sets. This is blues history right here, with enough heart, soul and humanity to last you a lifetime. Those already under the spell of Vol 1 will be delighted by the opportunity to hear another eleven cuts from this talented, never-to-be-repeated group.

Listen to “Blues For Yesterday”