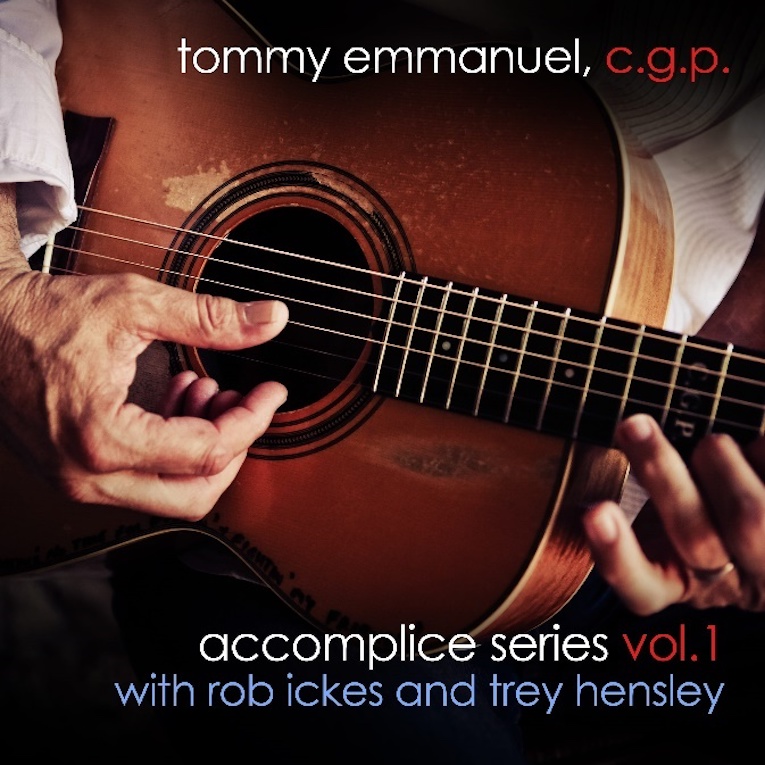 May 7 via CGP Sounds

Accomplice Series Volume 1 With Rob Ickes & Trey Hensley was born out of the deep admiration the musicians have for each other, also underlined by shows they’ve played together intermittently for nearly five years, the first of which was May 5, 2016 at the Palace of Fine Arts Theatre in San Francisco.

Creative sparks fly on the EP, which radiates good vibrations with white-hot picking virtuosity on acoustic guitars and Dobro—it’s all a welcome sanctuary from these upside-down times. There are three cover songs—the Chet Atkins/Doc Watson song “Flatt Did It,” Buck Owens’ “Raz-Ma-Taz Polka” and the standard “Copper Kettle”—plus a rendering of the Emmanuel composition, “It’s Never Too Late,” originally released in 2015. Pre-save and pre-add the EP HERE.

They’ve shared the first single and video “Flatt Did It” from the four-song digital-only EP (*see the track listing below) on CGP Sounds. Listen to the album’s first single and watch the video below. The Zach Pigg-directed video, premiered at The Bluegrass Situation, was shot in Nashville when the three artists recorded the EP.

Tommy Emmanuel says, “‘Flatt Did It’ is a tribute to Lester Flatt and some of his classic kind of licks. We had the film crew in there for the day and they just rolled the cameras. We actually just played and ignored them almost.”

Both Rob Ickes and Trey Hensley were thrilled to work with Tommy. Ickes explains, “Well, it’s always great to work with Tommy. He’s such a great artist, and such a great person. There are always a lot of sparks flying when we play together, and all three of us are into lots of different musical genres, so that’s always fun to explore different musical territories when we get together. ”

Watch the Video “Flatt Did It”

Pre-save and pre-add the EP here.

Tommy Emmanuel
Tommy Emmanuel has achieved enough musical milestones to satisfy several lifetimes. At the age of six, he was touring regional Australia with his family band. By 30, he was a rock n’ roll lead guitarist burning up stadiums in Europe. At 44, he became one of five people ever named a CPG (Certified Guitar Player) by his idol, music icon Chet Atkins. Today, he plays hundreds of sold-out shows every year from Nashville to Sydney to London. He’s piled up numerous accolades, including two Grammy Award nominations, two ARIA Awards from the Australian Recording Industry Association (the Aussie equivalent of the Recording Academy); repeated honors in the Guitar Player magazine reader’s poll including a cover story for their August 2017 issue; a cover feature for Vintage Guitar’s July 2020 issue; and was Music Radar’s reader’s poll #1 winner of the Ten Best Acoustic Guitarists in The World (December 2019). A noted fingerstyle guitarist, Emmanuel frequently threads three different parts simultaneously into his material, operating as a one-man band who handles the melody, the supporting chords and the bass all at once.
Tommy Emmanuel website

Rob Ickes and Trey Hensley
Take a 15-time IBMA (International Bluegrass Music Association) Resophonic Guitar Player of the Year and a Tennessee-born guitar prodigy called “Nashville’s hottest young player” by Acoustic Guitar magazine, and you have Rob Ickes and Trey Hensley, a powerhouse acoustic duo that has electrified the acoustic music scene around the world. Known for their white-hot picking and world class musicianship, as well as their soulful stone country vocals, the GRAMMY® nominated duo cleverly and uniquely melds bluegrass, country, blues, rock, jamgrass, and string band music of all kinds to create a signature blend of music that defies restrictions of genre. NPR has called Ickes and Hensley “two musical phenoms”; Vintage Guitar raved they’re an “acoustic firestorm” who “are changing the rules”; Acoustic Guitar describes their sound as “steel-string bluegrass with all the intensity of rock ‘n’ roll” and No Depression observed they’re “two of the finest musicians playing today.” Ickes and Hensley have shared the stage or collaborated with Tommy Emmanuel, Taj Mahal, Vince Gill, David Grisman, Jorma Kaukonen, Marty Stuart, and Steve Wariner—all admirers of the duo. Ickes, former founding member of bluegrass “supergroup” Blue Highway and highly sought-after Dobro master, has graced the recordings and concerts of artists such as Earl Scruggs, Merle Haggard, Alison Krauss, Tony Rice and more. Hensley, who earned his first IBMA Guitar Player of the Year nomination in 2020, made his Grand Ole Opry debut at the age of 11 (thanks to an invite from Marty Stuart with Earl Scruggs) and has appeared on stage with the likes of Johnny Cash, Peter Frampton and Old Crow Medicine Show. All three of the albums released by Ickes and Hensley have received widespread acclaim, including their debut Before The Sun Goes Down, which garnered a GRAMMY® nomination, and the combo’s most recent release World Full of Blues, which features collaborations with Vince Gill and Taj Mahal.
Ickes & Hensley website