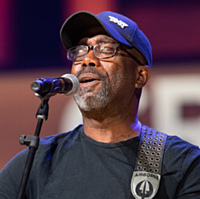 Rucker At The Opry

“The performances featured on this album brought people together at a time in which they were otherwise largely separated,” said OPRY VP and Executive Producer DAN ROGERS, who also executive produced the album. “As a collection, they to me represent some of the most remarkable music made during what I believe will be looked on as a most pivotal time in OPRY history.”

Due to the pandemic, the OPRY went without a live audience for 29 weeks as SATURDAY night OPRY SHOWS still went on. The OPRY continued broadcasting through its weekly WSM radio broadcast, and launched the “OPRY LIVE” television broadcast (NET NEWS 3/20/2020), which was viewed by more than 50 million people from more than 100 countries during the 29-week period. Watch a highlight reel of some of the members who kept performances going during the shutdown here.

Last OCTOBER, the OPRY began to welcome back a limited capacity audience, beginning with its 95th Anniversary celebration (NET NEWS 9/24/2020), and it currently hosts limited audiences at its TUESDAY, FRIDAY, and SATURDAY night shows.

Additionally, to celebrate the one-year anniversary of the livestreamed performances, fans can enter for a chance to win the “GRAND OLE OPRY One-Year Livestream Anniversary Sweepstakes.” It kicked off TODAY (3/12), and will continue through MONDAY, MARCH 29th. The prize package includes one pair of tickets to an OPRY show and tour, a copy of the new vinyl LP,  a collection of autographed livestream show posters from Country artists, exclusive WSM Radio and CIRCLE TV merch packs and more. More details and a chance to enter here.