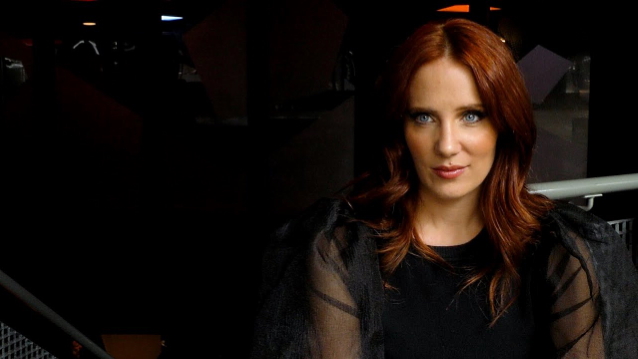 Simone Simons of Dutch symphonic metallers EPICA was recently interviewed by Anne Erickson of Audio Ink Radio. You can now listen to the chat below.

Asked how the metal world has changed in terms of its acceptance of women in metal from when she started out in EPICA to now, Simone said: “I guess women in the scene are more prominent, and, I guess, also maybe more respected or accepted for the fact that we have talent and can work hard and can succeed. I guess that women are still the minority in the whole metal scene, but it’s developing in the right direction, I would say. Back in the day, we had the term ‘female-fronted metal,’ and that is nowhere near accurate at the moment, because it does not describe the sound of the band other than there’s a female singer in the band. I, myself, am lucky enough to not have had any really big negative experiences to talk about. And I’m one of the guys; that’s how I always felt, I guess — with the exception of some females things. [Laughs] And I feel well being surrounded by a lot of guys; I never felt misunderstood or disrespected.”

Regarding whether there is pressure on women to physically look a certain way to make it in music, Simone said: “Well, I guess, in a certain way, the appearance is important, not just for the women, but also for the guys. I mean, don’t we all want to look our best? Don’t we put a lot of effort in making the live show visually appealing? But there is, of course, more pressure on the women to always look good and be in the best shape. And people create this image of you that you’re perfect, and you’re not, and it’s sometimes tedious to keep up that appearance. With guys, it’s easier for them; they can just roll out of bed and look like crap and nobody gives a shit. And [when you are a woman,] if you have a bad day or a huge zit, everybody is pointing at it. But, yeah, that’s how it’s always been. That’s just a thing you’ve gotta fight. And I know some of my female colleagues — I respect them enormously — they posted photos without any makeup on, and I think that is a great thing to do, to show everybody that we are normal as well. I post makeup videos, and people see me without makeup as well. And I guess I don’t mind as much as I did in the past. It comes with age, I guess, that you start to feel more comfortable. When you’re in your younger years, when your skin and everything is nice and tight, you are actually the most insecure; you don’t value or acknowledge that you’re young and that it has a lot of advantages and that it’s a beautiful thing to be young. But, yeah, that insecurity, I guess, gets to all of us.”

EPICA‘s latest album, “Omega”, was released on February 26 via Nuclear Blast. The follow-up to 2016’s “The Holographic Principle” was once again produced by Joost Van Den Broek (POWERWOLF, AYREON) in part at Sandlane Recording Facilities in Rijen, Netherlands.