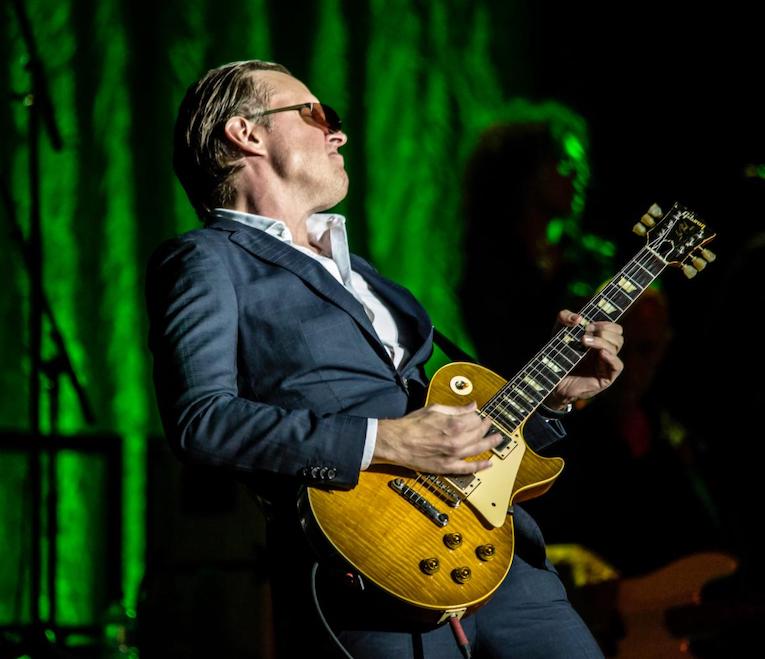 Monday, March 1, 2021 – Joe Bonamassa is known for “always being on the road”. This time he’s bringing the concert into the homes of fans around the world in an epic pay-per-view performance from the live music capital of the world – Austin, Texas. On April 1st at 9PM ET, he’ll perform a specially curated set from Austin City Limits Live, alongside Late Night with David Letterman’s Anton Fig on drums and legendary bass player Steve Mackey, as a rare 3-piece Blues Rock power trio!

Austin is one of the first spots Joe originally performed as a three-piece, years ago at legendary Antone’s, and is the city that saw the rise of guitar visionary Stevie Ray Vaughan. Austin City Limits Live, known as “music’s best address,” is a national landmark and was awarded “Best New Major Concert Venue” by Pollstar when it opened. It has been home to some incredible artists over the years such as B.B. King, Willie Nelson, Santana, Paul McCartney, Peter Frampton, and Bonamassa himself as well as many others. ACL Live is a world-class stage to perform at and no doubt, Bonamassa will bring his incredible power to the stage, making his own mark on its history.

This event especially goes out to the fans, who via social media, have made their stamp on the evening, selecting their favorite Bonamassa tunes from his unparalleled, extensive catalogue of 24 #1 studio albums and countless productions, to create a very special set list. It will be a new and exciting celebration of some searing hits from his earliest influences as well as amazing original compositions embodying the guitar mastery that he’s best known for. This highly curated set will more than delight longtime super fans as well as captivate new ones.

Livestream tickets and packages are available to purchase here.

There are a variety of pricing levels available for fans worldwide to be a part of this special “audience.” Tickets to the livestream event starts at $30. Fans may also purchase a $44.99 package that includes a limited-edition commemorative t-shirt, or upgrade to the Deluxe package for $64.99 which also features the Ultimate Video Collection, a 1-year all pass for Bonamassa’s on-demand service which includes 17+ concert releases from Joe Bonamassa, Black Country Communion, and Rock Candy Funk Party – available at any time on most devices.

As part of this unique concert event, fans also have the option to purchase a Commemorative VIP ticket giving them an experience they will never forget. VIP ticket holders will have their photo and name featured in the livestream credits and DVD credits as a virtual audience member.

Joe Bonamassa is one of the most celebrated performing musicians of today. Hailed internationally as one of the greatest guitar players of his generation, Guitar World has honored him as “the world’s biggest blues guitarist.” The two-time Grammy-nominated artist has almost single-handedly redefined the blues-rock genre and brought it into the mainstream. Joe recently received his 24th #1 album on the Billboard Blues Chart with the studio album Royal Tea, a nod to his British heroes, recorded at the legendary Abbey Road Studios.

Amidst the pandemic, Joe performed the “Royal Tea” album in entirety before its release last September at the iconic Ryman Auditorium in Nashville with over 17,000 virtual tickets sold, reaching 44 different countries. The event also raised over $32,000 for Bonamassa’s Fueling Musicians program, presented by his non-profit Keeping the Blues Alive Foundation (KTBA). Now Joe is ready to hit the stage again for an even more exciting, fan-curated experience at Austin City Limits Live. Each ticket purchase for the livestream will include a $1 donation to ‘Fueling Musicians’.

Bonamassa has been working hard to raise money for musicians affected by the COVID-19 crisis. The Fueling Musicians program is an emergency relief fund designed to support musicians by providing immediate cash payments for essential living expenses of $1,500 to help them stay afloat and get back on the road again when it is safe. To date, they’ve raised over $380,000 and distributed the money to over 230 artists. In fact, they’re getting checks delivered to some folks who have yet to even receive their support from the government stimulus. As someone who has spent the majority of his life on the road, Joe knows the clear and evident impact of the crisis on his entertainment community. For those interested in donating, visit here.

While much of the applause Bonamassa receives should be credited to his sheer talent, some part of his success needs to be attributed to Joe and his business partner for having the foresight and ability to become some of music’s savviest entrepreneurs. Bonamassa now 43, and his partner Roy Weisman have together devised a 360-degree independent business model that has survived and thrived during one of the music industry’s most uncertain eras, particularly considering the challenges created by the current pandemic.

In addition to the livestream, Bonamassa has announced a select run of live, limited capacity, safe and socially distanced in-person shows for March and April through Macon, GA, Clearwater, FL, Austin, TX, and Huntsville, AL. Tickets for those events can be purchased here.

About Joe Bonamassa
As a professional musician for over 30 years, Joe Bonamassa continues to blaze a remarkably versatile artistic trail, and amass an authentic, innovative and soulful body of work. Bonamassa’s career began onstage opening for B.B. King in 1989 when he was only 12 years old. Today, he is hailed worldwide as one of the greatest guitar players of his generation and is an ever-evolving singer-songwriter with over 30 albums to date all under his own label, J&R Adventures.

About Keeping the Blues Alive Foundation
Keeping the Blues Alive® Foundation is a 501(c)(3) non-profit organization founded by two-time GRAMMY-nominated blues-rock artist Joe Bonamassa and his long-time manager Roy Weisman. KTBA fuels the passion for music by funding projects and scholarships to allow students and teachers the resources and tools that further music education. Since its inception in 2011, KTBA has funded music programs and initiatives affecting 70,000+ students in all 50 states. This is accomplished by making weekly donations to music projects in schools, as well as funding merit-based scholarships and extracurricular programs all over the country. Due to the impact of COVID-19, Joe Bonamassa and Keeping the Blues Alive Foundation launched the Fueling Musicians Program, which is providing immediate cash payments for essential living expenses, gas cards, Guitar Center gift cards, etc. to help artists stay afloat and get back on the road again when it is safe. Individuals or organizations interested in helping Joe support this program should go to the Keeping the Blues Alive website, ktba.org or ktba.org/fueling-musicians.