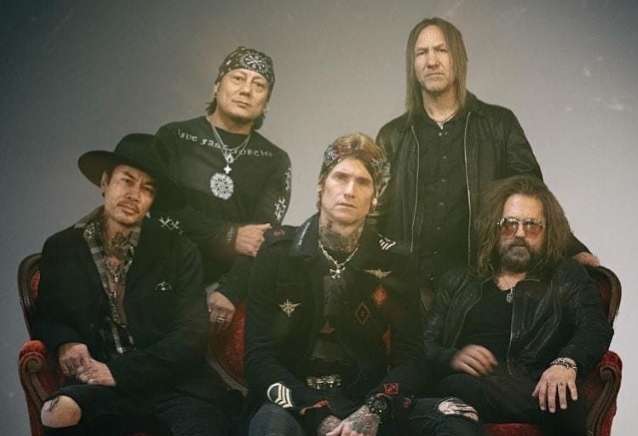 Long-running California rockers BUCKCHERRY have set “Breaking Down The Barricade” as the title of their new album, tentatively due this summer. The follow-up to 2019’s “Warpaint” was recorded last fall in Nashville, Tennessee with producer and songwriter-for-hire Marti Frederiksen, who has previously collaborated with AEROSMITH, DEF LEPPARD, Jonny Lang and Sheryl Crow, among many others.

Speaking to Shawn Ratches of Laughingmonkeymusic, BUCKCHERRY guitarist Stevie Dacanay (a.k.a. Stevie D.) stated about “Breaking Down The Barricade” (see video below): “We worked on this one with Marti Frederiksen, who’s like the sixth member of AEROSMITH. So the feel is gonna be a little bit different as well [compared to previous BUCKHERRY albums].

“We banged one out in no time,” he continued. “Josh [Todd, BUCKCHERRY singer] and I had been, since quarantine, we started writing. And by the time September came around, we were ready to start tracking another album. But what we did is we went to Nashville and we wrote another batch of songs with Marti Frederiksen, and we were all ready to go by October, to record. We were so ready that it literally took us less than 10 days to record the whole thing.”

According to Steve, BUCKCHERRY wrote over 25 songs this time around but ended up recording only 10. “We thought about [releasing a double album], but right now, a lot of people aren’t releasing full-length albums — a lot of people just release singles and videos,” he explained. “So, we decided to cull the whole thing down to 10. The Japan release, we’re gonna release two extras.

“I was talking with Josh, ‘Which [songs] do you wanna give up? Which ones do you wanna keep for the next album to work on?’

“I just keep going,” he said. “At some point in the writing process, you hit a brick wall, and that’s when it’s good to have these.

“We have a new process now with Marti that really works for us and that we really like.”

As for a possible release date for “Breaking Down The Barricade”, Steve said: “If the numbers go down — the cases of COVID, let’s say — then we’ll be able to kind of work backwards from a release date or summer touring or spring touring. We’ve got some shows booked in February. But if the numbers start going down now, then they’re gonna say, ‘Well, we’re gonna start booking shows for spring moving forward.’ And if we can tour, then we’ll put out the album. So we’ll set a release date and then a book a tour from there.”

Last November, Todd told Audio Ink Radio about about the musical direction of the new BUCKCHERRY material: “Well, it’s not gonna change from a BUCKCHERRY rock record. Alls I can say is that we’ve just come leaps and bounds from the first record, as far as songwriting and how we put everything together. And just as far as the quality of songs, song to song, it’s just so powerful. I can’t wait for everybody to hear it. Marti Frederiksen is producing it. He produced a few records of ours back in the day. And it’s been really great to be reunited with him, and he’s a super talented guy. It’s like having a sixth band member. So, it’s been a lot of fun.”

Last summer, BUCKCHERRY recruited JETBOY‘s Billy Rowe as its new guitarist. He joined the group as the replacement for Kevin Roentgen, who left BUCKCHERRY in July 2020.

Roentgen, who joined the California-based band in 2017, made his exit official in a social media post. He wrote: “Bottom line, I made this decision to come off the road and spend more time with my family. The guys understood this, and for that I’m thankful. Though my wife and daughter always one hundred percent supported me in this gig, they are quite happy now to have me home.”

Roentgen joined BUCKCHERRY as the replacement for original guitarist Keith Nelson. Roentgen can be heard on “Warpaint”, which was released in March 2019 via Century Media/RED Music. The 12-song record was produced by Mike Plotnikoff, whose previous collaboration with the band was BUCKCHERRY‘s multi-platinum third album, 2005’s “15”.

In 2019, BUCKCHERRY recruited Francis Ruiz as its new drummer. He joined the group as the replacement for Sean Winchester, who exited BUCKCHERRY after laying down the drum tracks on “Warpaint”.