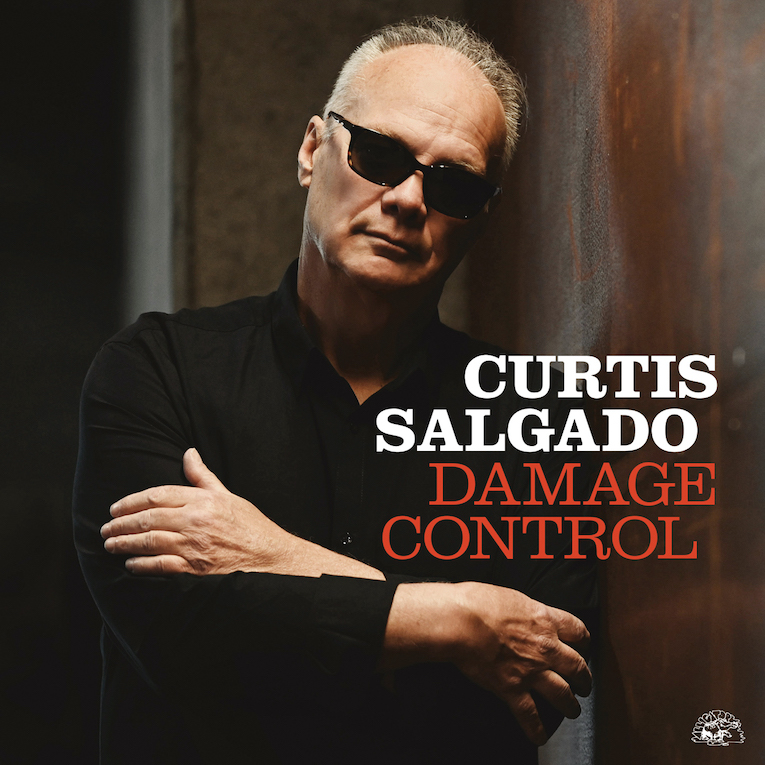 Multi award-winning blues, soul and R&B singer, songwriter, harmonica player, Curtis Salgado is set to release his 11th album, his fourth for Alligator Records, on February 26th, 2021. Renowned for his soulful and authentic vocals, Salgado lives up to his reputation and more on Damage Control, a sparkling gem with compelling songs, insightful lyrics, wry humor, and some of the best musicianship you’ll hear all year.

With nine Blues Music Awards, including B.B. King Entertainer of the Year, Curtis Salgado is known for his electrifying live performances but also for his passionate and insightful songs. He produced Damage Control himself and recorded in three studios with three different groups of musicians, all of whom are the absolute best in the business. The result is a stellar collection of vivid life stories told by a gifted vocalist.

Before co-leading The Robert Cray Band for six years, in 1977 Salgado became John Belushi’s blues mentor and Belushi credits him as the inspiration for ‘The Blues Brothers.’ He earned his worldwide fan base by touring all over the world and packing clubs, festivals and concert halls for the last four decades.

Kicking off Damage Control is “The Longer That I Live,” a fresh up tempo blues number with a rock n’ roll feel, featuring beautiful piano (Jim Pugh) and organ (Mike Finnigan) and one helluva tight band. With delightful groove, Salgado leads us through a soul-testifying commitment to relishing life and making the most of it. Kid Andersen’s guitar is the perfect complement to the thread of organ and piano, flush with expert bass and drums. You can envision this performed live by Salgado and the band, the crowd on their feet, whooping and hollering in praise.

Another crowd pleaser, “What Did Me In Did Me Well,” sees this same roundup of musicians killing it as Salgado wraps his voice, full of personality, around this soul and R&B track about enduring a bad situation but emerging with insight. “I learned in time that love is in the details.” Again beautiful piano and B3 bookend Salgado’s melodic harp playing, something he’s known for.

Wry humor infiltrates “You’re Going To Miss My Sorry Ass,” a rousing blues barrelhouse track. Salgado is so present in the song, it’s almost as if he’s singing directly to you. Rollicking piano (Kevin McKendree) and acoustic bass (Mark Winchester) and drums (Jack Bruno) ground this bluesy rock n’ roller with Salgado’s calling card, charisma and personality, front and center. He sings “Don’t expect no apologies, I got none to give.”

About Damage Control, Salgado explains that he “created a rock n’ roll record with lyrics that hit.” He’s got that right. Each song also carries moving melody and a sense of joy and playfulness. It is his ability to sing with passion about life’s pitfalls with an uplifting musical approach and vocal delivery that is part of the artistry of this album. It is Curtis Salgado himself, of course, but Damage Control has a certain magical quality–everyone involved is working on all cylinders.

A perfect example is “I Don’t Do That No More,” an up tempo, rockin’ blues tune about getting sober, including details about what life was like before cutting out what ailed. The song is focused on joy and what is to be savored now, all channeled through one of the blues masters and his outstanding musicians.

Title track “Damage Control” opens with solo piano (Mike Finnigan) that sets the mood, only to have the tune swing to a groove that’s so catchy you’ll want to press play again and again. With Salgado at the helm, it’s an easy-breezy song with jazzy overtones, but with thoughtful lyrics about the meaning of life. A standout.

Another standout, “The Fix” has some kind of groove and a biting tone. About white collar crime and politics, Salgado tells this story with intensity, as if he’s looking you in the eye and telling you to listen up. “It’s hard to trust the system when the fix is in.” He fills the song with harp riffs, adding to the mood. Kid Andersen’s staccato guitar adds a layer of sleight of hand, a theme in the song.

Curtis Salgado has crafted a collection of truly memorable songs on Damage Control. It’s a tremendous album, a master class in storytelling, in songwriting, in musicianship. And not just because Salgado is one of the best. He put his best into Damage Control and it is a record to be savored.