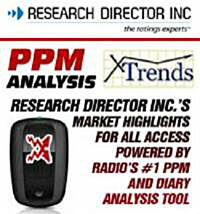 
If JANUARY made you shiver, The Ratings Experts from RESEARCH DIRECTOR, INC. are here to deliver the data you crave. Along with our trusty companions from XTRENDS, we dive deeply into the numbers from the most recently completed survey. That one ran from JANUARY 7th through FEBRUARY 3rd, and featured a lone holiday weekend but was completely devoid of SANTA’s taint … We mean, the scourge of CHRISTMAS music. We better just move on …

Despite the big share loss, WLTW was in first place 25-54 for the fifth book in a row. WSKQ repeated at #2 but with a small share loss. Two stations moved up and into a tie at #3. WNYC took one step forward as it rebounded from a down book. WXNY leapt from #6 with a huge share increase. iHEARTMEDIA Top 40/M WHTZ (Z100) remained at #5 but with a solid share increase. WBLS slid to #6 with its smallest share since AUGUST.

After taking the holiday season off, WSKQ vaulted back into the 18-34 lead as it regained all of last survey’s massive share loss. WLTW slipped to #2 and just edged out a flat WHTZ, which dipped to #3. MEDIACO Top 40/R WQHT (HOT 97) remained at #4 but with its highest share in over a year. WXNY jumped three spaces to #5 and just beat WBLS, which stepped up to #6. Both stations ended three-book slides. Last survey, iHEARTMEDIA Urban WWPR (POWER 105.1) and ENTERCOM Alternative WNYL (ALT 92.3) were tied at #5. WWPR was up slightly while WNYL was off and the stations alit at #7 and #11, respectively.

The one-two 18-49 punch remained the same for the third straight survey. Despite its massive share loss, WLTW was still #1. It held a substantial lead over #2 WSKQ, which endured a modest share loss. WNYC inched up to #3 as it bounced back from a down book. WHTZ was up slightly but still stepped down to #4. WBLS slipped to #5 despite a small gain. It was tied with WXNY, which worked its way up from #9 with a rather large share increase.

Prior to SANTA muddying the waters, KRTH had been #1 25-54 for seven straight surveys. The station was back on top this month with a small gain. KOST dropped to #2 as it shed more than half its previous share. Then, there were a couple of ties. KLVE stepped up to #3 with a slight gain and was joined by ENTERCOM Adult Hits KCBS-F (93.1 JACK FM), which advanced from a tie at #6 with a solid share increase. Two other outlets rose up to tie at #5. iHEARTMEDIA Top 40/M KIIS (102.7 KIIS FM) took three steps forward with a solid share increase while iHEARTMEDIA Alternative KYSR (ALT 98.7) leapt from #9 with its best outing in over a year. KBIG dropped four slots to #7 while SBS Regional Mexican KLAX (97.9 LA RAZA) also fell four places before landing at #8.

The redistribution of 18-34 ratings wealth seemed to benefit KRTH and KYSR the most. KRTH rose to #1 with its best book since AUGUST and narrowly defeated KYSR, which remained at #2 but with a huge share increase. KOST dipped to #3 with the expected share loss but was in better shape than a year ago when it landed in a tie at #8. The three stations that had been tied at #4 went their separate ways. SBS Spanish AC KXOL (MEGA 96.3FM) remained in place with a small gain. KIIS slipped to #5 with a slight decrease while KBIG dropped to a tie at #8 with its lowest score in over a year.

The top two 18-49 positions remained as they were. KOST’s massive share loss did not prevent the station from remaining in first place. However, it just edged out #2 KRTH, which posted its largest share since AUGUST. KYSR jumped from #9 to #3 with a huge share increase. The two stations previously aligned at #6 elbowed their way into the top five. KCBS-F was up to #4 with a solid share increase. KLVE stepped up to #5 with a slight gain and was paired with KBIG, which dropped down from #3. A flat KIIS slid to #7 while KLAX dropped to #8.

CHICAGO: It’s News To Us

WBEZ had a huge 25-54 share increase as it jumped from #5 to #1. It was about a half share in front of UNIVISION Regional Mexican WOJO (QUE BUENA 105.1), which stepped up to #2 with a small share increase. WVAZ dipped to #3 as it returned most of last survey’s modest increase. WTMX remained at #4 with a slight share gain while WDRV was up three places to #5 as it halted a three-book slide. WLIT dropped from #1 to #6 as it surrendered about two-thirds of its previous share. It finished just ahead of UNIVISION Spanish Contemporary WPPN (AMOR 106.7), which dipped to #7 despite landing its largest share in over a year.

It was quite the 18-34 book for WBEZ as it more than doubled its previous share as it rose from #5 to #1. WVAZ remained in place but was a distant #2 as it suffered a large share loss. iHEARTMEDIA Top 40/M WKSC (103.5 KISS FM) repeated at #3 as it ended a four-book slide. iHEARTMEDIA Urban WGCI had a strong rebound from a down book as it leapt from a tie at #8 to #4. ENTERCOM Top 40/M WBBM-F stepped up to #5 as it, too, bounced back from a bad book. WOJO slipped to #6 with a small loss. And what of our Santa station? WLIT fell from #1 to a tie at #15.

As with the previous demo, WBEZ went from #5 to #1 though it did not double its share in the process. WOJO moved up to #2 with a small increase but was about a share off the lead. WVAZ stepped down to #3 with a noticeable share loss. WLIT fell from first to fourth and was tied with WPPN, which moved up from #7 with – again – its best book in over a year. That duo was just ahead of WKSC, which remained at #6 but rebounded nicely from a down book.

SAN FRANCISCO: If KOIT Were An SFX

KQED got back all the share it lost in the HOLIDAY book as it moved back to #1 25-54. KMVQ had its best showing in over a year as it stepped up to a somewhat distant #2. KOIT fell from first to third as it shed more than half its previous share. KCBS-A repeated at #4 but with its best book since MARCH. ENTERCOM Hot AC KLLC (ALICE @97.3) stood alone at #5 with its highest share since SEPTEMBER. Its former partner in that space – iHEARTMEDIA Top 40/R KMEL – dipped to #6 despite a solid share gain. CUMULUS Classic Rock KSAN (107.7 THE BONE) rattled from a tie at #10 to #7 as it got back into pre-Santa shape.

Even though KOIT lost more than half its 18-34 share, the station remained #1 for the third book in a row. KMEL moved up to #2 with its first up book since SEPTEMBER and was less than a share off the lead. KQED was up two slots to #3 with its highest mark in over a year. KMVQ slid to #4 with a small loss but was well ahead of #5 iHEARTMEDIA Hot AC KIOI (STAR 101.3), which also had a small loss.

There were a lot of 18-49 Santa shares floating free. KMVQ snagged enough to propel the station to #1 with its best book in over a year. KQED got some, as well, as it stepped up to #2. KOIT lost almost exactly half its share as it went from #1 to #3. KMEL repeated at #4 with a strong share increase. Last survey, KLLC and UNIVISION Spanish Adult Hits KBRG (AMOR 100.3) were tied at #9. Both stations had nice share increases and moved up to #5 and #6, respectively.

The 25-54 playing field was the scene of wholesale substitutions. KJKK assumed the mantle of market leader as it stepped up to #1 with a slight increase. KHKS moved up two spaces to #2 with a small increase. KZPS jumped from #8 to #3 with its best outing since SEPTEMBER. SERVICE Urban KKDA (K104) advanced to #4 with a slight increase and was in league with KSCS, which stepped up from #7. CUMULUS Sports KTCK-A (THE TICKET 96.7FM/1310AM) bounced back from a down book and moved up seven places to #6. Three stations that had been in the top five dropped out and landed in a heap at #7. KLTY had been #5 while KLNO was previously #3. KDGE was last month’s demo leader.

The 18-34 share loss for KDGE was not as dramatic as seen in the previous demos and the station managed to extend its stay at #1. KHKS got back the lion’s share of last month’s loss and moved up to #2. It was about a share behind the leader. iHEARTMEDIA Hot AC KDMX (NOW 102.9) advanced three spaces to #3 with its best book since APRIL. KLTY stepped up to #4 with its highest score in over a year. This pushed KSCS – which was slightly off – back to #5. iHEARTMEDIA Active Rock KEGL (97.1 THE EAGLE) descended from #2 to a tie at #9 with its smallest share in over a year.

KJKK had its best 18-49 book in over a year as it moved up to #1. KDGE lost close to half its previous share as it stepped down to #2. KHKS rose from #6 to #3 as it ended a four-book slide. KKDA inched up to #4 with its highest mark since JUNE. Two stations made bold moves to advance to #5. KSCS was up from #8 with a small gain while KZPS rose from #10 with its best showing since SEPTEMBER. KLNO dropped five places to #8 with its smallest share since MARCH. KEGL went from #4 to #10.

And so ends the first portion of our JANUARY tasking. Thank you for lending an eye. The Ratings Experts from RESEARCH DIRECTOR, INC. will pause for a moment to consider some of our life choices. We will be back with round two, which will feature HOUSTON, WASHINGTON, DC, ATLANTA, PHILADELPHIA, and BOSTON.

Before you click away, click on over to our blog page and sign up. It comes with a money-back guarantee! Of course, it’s free so that’s pretty much an empty promise. Check it out here: www.ResearchDirectorInc.com/Hot-Topics