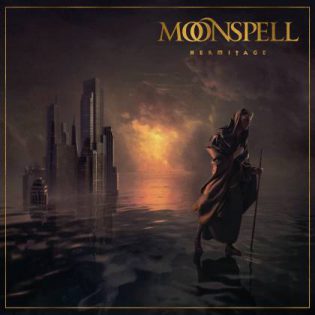 Imagine how joyous it would be to stumble across MOONSPELL for the first time today. Although perennially and inexcusably underappreciated, the Portuguese band have spent the last 30 years steadily building the richest and most impressive of catalogues. From their earliest efforts as a flamboyant black metal band to the many detours and experiments that have typified their pre- and post-millennial exploits, pretty much everything that has emerged under the MOONSPELL banner has oozed sincerity and class. They may be the underground’s undisputed chief goths, and “Hermitage” will undoubtedly satisfy those who crave a certain level of darkness and pomp, but it’s about time this band were recognized for their singular and remorseless originality. Both the most overtly progressive record they have ever made and one of the most unapologetically accessible, MOONSPELL‘s twelfth full-length once again screams its creators’ brilliance from a mist-enshrouded rooftop.

As humbly stated in the accompanying press release, “Hermitage” eschews the often theatrical and grandiose conceits of previous MOONSPELL albums in favor of a more personal and emotionally resonant approach. The metaphorical complexities of the songs themselves will doubtless unfold after repeated listens, but the most striking thing about “Hermitage” is its intrinsic warmth and charm, the spiky, orchestral explosiveness of 2018’s “1755” replaced here with an irresistible sense of humanity and grace. The result is deeply, densely melodic, with numerous wonderfully languorous passages where the ghost of PINK FLOYD shimmers through. But the album is also noticeably more intimate, with Frontman Fernando Ribeira delivering some of his most vulnerable and unfussy vocals yet. A strange but potent mixture of stripped-down intimacy and widescreen ambition, songs like electrifying opener “The Greater Good” and the bombastic “The Hermit Saints” are equal to anything in MOONSPELL‘s illustrious canon.

Always a band with a broad progressive streak, MOONSPELL have never been more overtly prog than they are on “Hermitage”. Whether it’s the creepy organ tones that haunt the dark and gritty “Apoptheghmata” or the bluesy, Spaghetti Western sweep of “All or Nothing”, this is an album that bulges with moments of subtle inspiration and small but significant deviations from the expected. It still delivers the desired dose of grim splendor too, of course, and Riberia‘s infernal roar remains one of the most distinctive and convincing in the business, but as they near the end of their third decade, MOONSPELL are still evolving. Tellingly, the most extraordinary song on this extraordinary album arrives toward the end: the immersive, doomy psych-rock of “Without Rule” glowers and grinds, with a riveting sense of dynamic ebb and flow, somehow sounding at once like everything and nothing all, while exuding ferocious, irresistible charisma. Yes, we are several light years away from “Wolfheart” and “Irreligious” here, but if you have had the privilege of following MOONSPELL from the start, “Hermitage” is audibly driven by that same, questing spirit. It’s yet another career peak from some bona fide contemporary greats.