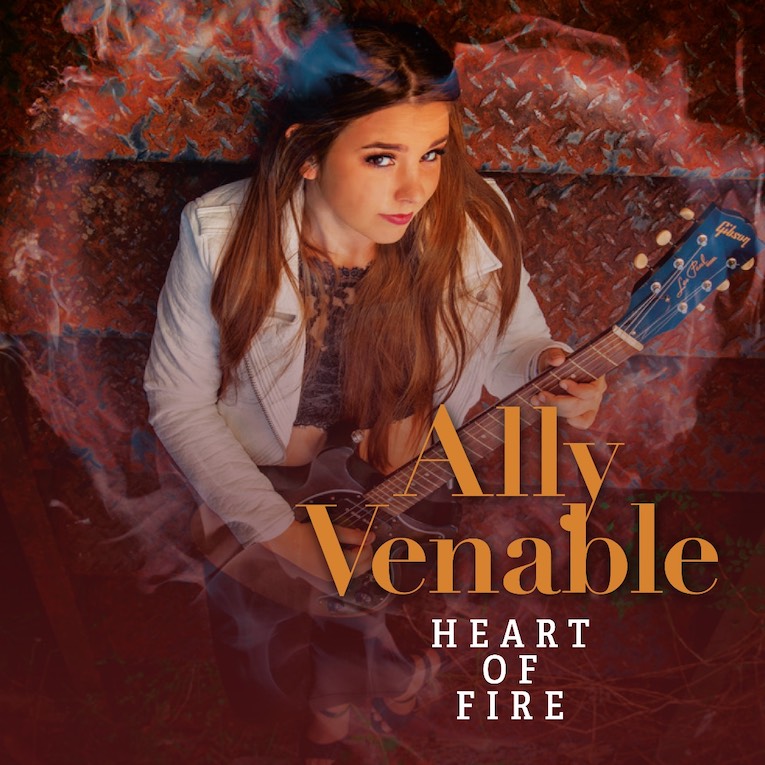 21-year-old Texas guitar sensation Ally Venable riffs hard and comes on strong on her fourth album Heart of Fire. Set to meet the world on February 26th, 2021 on Ruf Records, the record is a blazing statement from a young guitarist, singer, and songwriter with an ability to make passionate roots music with the crossover potential to succeed outside of the roots universe. Tracked at the Bessie Blue Studio in Stantonville, Tennessee last February with renowned producer Jim Gaines (John Lee Hooker, George Thorogood, Bernard Allison, Stevie Ray Vaughan) and featuring guest spots from Devon Allman, Kenny Wayne Shepherd and Cody Dickinson, the set marks Venable as one of those who represents the future of American music. Her sound explodes with the spirit of greats gone by but also displays the fearless, unbound creativity of an emerging performer determined to do things her own way. Heart of Fire melds genres, explores song craft, and carries a challenging, unguarded authenticity that speaks the truth, even when it hurts.

Originally from Kilgore, Texas, Ally Venable has made a big noise in a short time. She has released four albums so far, including No Glass Shoes (2016), Puppet Show (2018), the #2 Billboard-charting Texas Honey, and this year’s Heart of Fire. Venable has come a long way from her church choir beginnings and has built a large, loyal following that will wait in line to hear her play. She has an aggressive, slashing touch on the guitar and sings with the power and conviction of a true believer. Her songwriting gets deeper and more profound with each new release and she is currently doing the finest work of her career. Her writing goal for this record was to create a tone of perseverance, love, and overcoming as an outlet for listeners living in our currently-crazy modern world.

From the first gritty notes of her opening title track “Heart of Fire,” Venable shows an enviable identity and confidence in all she does. Her vocal sound is clear and powerful and her guitar playing can stand tall with anyone in the game. Venable is adept at balancing crunchy rock guitar and radio-worthy melodies in perfect proportions and instantly comes off as a big hit waiting to happen. The swampy, slide-inflected “Played The Game” hits just as hard but in a darker, moodier direction. Ally uses a quieter verse tethered to a bold chorus hook to make sure you remember her and takes advantage of her mighty vocal belt to drive her point home.

“Hateful Blues” is a soulful lament to love gone wrong and the bitterness it often brings. It’s heavy, unsettling, and a little scary because Venable puts it down in a way that makes you unsure of what the song’s character is capable of. She gives the cut all the drama and emotional traction it needs to be one of the highlights of the record. To be able to do this at just 21 years old is beyond impressive.

Devon Allman jumps in on background harmonies on the wistful and rocking “Road To Nowhere.” Venable sings as if her soul was actually shattering at that exact moment in front of the microphone and her guitar solo is beyond fierce. Blues/rock guitar star Kenny Wayne Shepherd hauls out the big licks on the slow Southern rocker “Bring On The Pain.” His tone and note choices compliment Venable well and he helps her keep the temperature high on this epic, unhurried jam.

Every tune on Heart of Fire is tight and meaningful but pay special notice to the Zeppelin-tinged “Hard Change” and the aptly-named “Tribute to SRV.” Ally Venable is well on her way to becoming one of the top names in guitar music and has the skills on tap to prove it all night. She’s a storm to be celebrated and a creator of the highest order. Get this record and keep it forever.

Pre-order link for Heart of Fire