Clufetos worked with such rock icons as Nugent, Alice Cooper and Rob Zombie before joining Ozzy Osbourne in 2010. That led to a spot as the drummer on BLACK SABBATH‘s last two world tours.

Earlier this month during an appearance on SiriusXM‘s “Trunk Nation With Eddie Trunk” show, Clufetos was asked why he did not record the drum tracks on BLACK SABBATH‘s final album, 2013’s “13”, on which the drums were played by Brad Wilk of RAGE AGAINST THE MACHINE. “That’s show business,” he said. “That’s all you can say. Not everything works out, but in the end, it works out. I’m glad I got to do the tours, and I think I made a good dent, and I was very proud of what I did on stage with those guys. I can’t think about what I didn’t do. They made a great record, they had a Number One record, and you can’t argue with that either. So there you go.”

Asked if ever had any pinch-me, “holy shit” moments while performing with BLACK SABBATH during “The End” tour, Tommy said: “Yes and no. Meaning, the best thing about playing with those guys, it’s not that it was BLACK SABBATH, it’s that all three of those guys, they may have their differences, but when they go on stage, they are a hundred and ten percent into being a group together, more so than anybody I’ve ever played with. It’s a unit up there — that’s what makes them so great. Tony [Iommi, guitar] may lead a certain part of the set somewhere, or a song, Geezer [Butler, bass] may lead a part, and this guy may step back, and that guy may step forward. And they’re backstage getting ready for the show. They’re not worried about Instagram or meeting people. Everybody on that stage, myself included, was a hundred and ten percent. That’s what made it so great. On top of that, playing amazing, legendary, iconic music with the guys who wrote it and created it was undeniably awesome, and it was a privilege, and it made me a better musician playing with those three guys together. And that was an honor — more so than it being BLACK SABBATH, if that makes sense, because that’s a special thing, that’s a rarity, and that’s what makes them BLACK SABBATH.”

Back in 2013, Ozzy told Billboard that the way Clufetos‘s exclusion from the “13” album was dealt with “wasn’t very fair on Tommy. [Producer] Rick Rubin just didn’t want to work with him for reasons I don’t know,” Osbourne said. “He’s a great drummer, and he’s been with me for awhile now and I just felt that nobody discussed the decision about Brad to me, and it’s not fair to Tommy. Tommy was promised the album… It’s not because he was my drummer and my ego wanted him. It was just the fact the way it was dealt with. It just got me a bit, it got me pissed off about it. It’s all right now. He’s a great drummer. I don’t know what the problem was.”

As for Wilk, Osbourne said he “did a good job. I don’t have anything bad to say. He’s a very nice guy.”

In an e-mail to Billboard, Rubin explained that “Brad is a muscular drummer with great feel and understands the groovy nature of their music — RAGE AGAINST THE MACHINE is a groovy rock band, not a metal band — so it was worth a try. When they played together the first time, it was obvious he would do a great job in the seat [original SABBATH drummer] Bill [Ward] left vacated. Bill‘s a great drummer and I’m sure it would have been an amazing album with him. We all wanted him to participate.”

Asked what happened with Bill Ward, who was announced as part of the band’s reunion in late 2011 but bowed out a few months later, Ozzy told Spin, “To be absolutely truthful with you, I can’t really remember. It was such a long time ago. There was the business side of it and the money side of it. We just didn’t have the time to keep the people waiting another fucking ten years . . . We would have loved Bill Ward to step up to the plate, but it never worked out.”

Ward claimed that he sat out the reunion because of unfair contractual terms, although the members of SABBATH have hinted in other interviews that he wasn’t physically up to the task.

“13” was the first album in 35 years to feature Osbourne, Iommi and Butler all playing together.

In February 2017, SABBATH finished “The End” tour in Birmingham, closing out the quartet’s groundbreaking 49-year career.

“The End” was SABBATH‘s last tour because Iommi, who was diagnosed with cancer in 2012 and is currently in remission, can no longer travel for extended amounts of time.

In a 2018 interview with The Oakland Press, Clufetos stated about playing with SABBATH: “All four of those original SABBATH guys have a very unique way of playing, four unique individuals creating a sound. You can’t copy them. You’ve just got to get into the heartbeat of the music and do it justice. Hopefully I did it justice. I tried my best.”

As for Osbourne, Tommy said: “He’s a special guy. He has a special talent and a unique charisma unto himself that I’ve never seen before. He’s just entertainment, all the way around. He’s a master at what he does, and he knows how to entertain a crowd and give them what they want. He sets the tone, and you want to go to war with him. It’s a great feeling being behind him.” 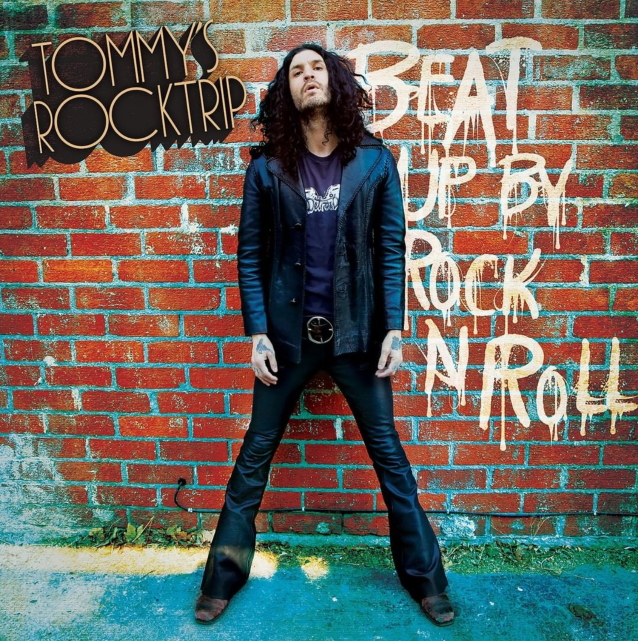