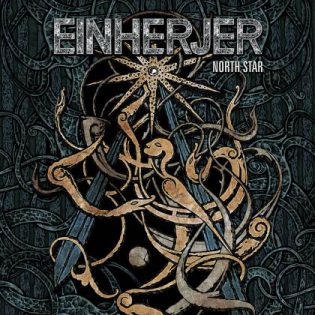 07. Listen To The Graves

Despite being around since 1993, one brief hiatus aside, EINHERJER still wear their underdog status as a badge of honor. The very notion of Viking metal is continually in a state of flux and the genre is reliably hard to pin down, but these Norwegian veterans have steadily evolved into one of the most fearsome and singular forces to operate beneath that banner. And as with 2018’s widely hailed “Norrøne Spor”, their ninth full-length album hammers home the superiority and distinctiveness of what they do.

More importantly, “North Star” is an agreeably monstrous heavy metal record. Where some bands become willfully bogged down in atmospherics and faux spirituality, EINHERJER seem to have recognized that if Vikings walked the Earth today, they would be listening to this, rather than eight minutes of wistful fiddle and the sound of sticks being bashed together. Opener “The Blood And The Iron” says it all: four minutes of driving, balls-out metal, melodic at its core but rooted in the windswept dissonance of the blackened, frozen north. “Stars” is even more evocative, with its funereal, Dio-era BLACK SABBATH gait, ghoulish, post-punk reverberations and a gritty, metal-as-fuck chorus. EINHERJER‘s subversive way with words is back for “West Coast Groove” — an unlikely title for a Viking metal song, until you remember that Norway has a West Coast as well. Regardless of its title’s provenance, it’s another gruffly straightforward and rowdily anthemic affair with a blistering lead break from guitarist Ole Sønstabø.

Three songs in, and “North Star” takes a decisive turn toward the epic. “Ascension” maintains the momentum and is still built from urgent, nails-hard metal riffs, but here the Norwegians’ allow their ideas to expand across seven, languorous minutes of slow-build malevolence. Elsewhere, “Listen To The Graves” employs a lumbering, doom ethos to mesmerizing effect, before erupting into bellicose, frostbitten thrash mode. “Chasing The Serpent” digs deep into the melodic sensibilities of ’80s metal, like some malicious echo of the past brought to vibrant life, but with intermittent flashes of prog ingenuity. Fittingly, EINHERJER give us a taste of authentic early ’80s NWOBHM with an unexpected but utterly glorious cover of SAXON‘s “Heavy Metal Thunder”. Always one of the British legends’ most riotous songs, it’s played with such power and force here that it almost feels like a brand-new tune.

Closing with the sober but stirring “Razor’s Edge”, a song that sounds like AC/DC and BATHORY dueling on a mountaintop, “North Star” is rousing and thunderous in a way that most metal records are not. Both a love letter to the old school and an artful tribute to an arcane past, it’s one of EINHERJER‘s finest.