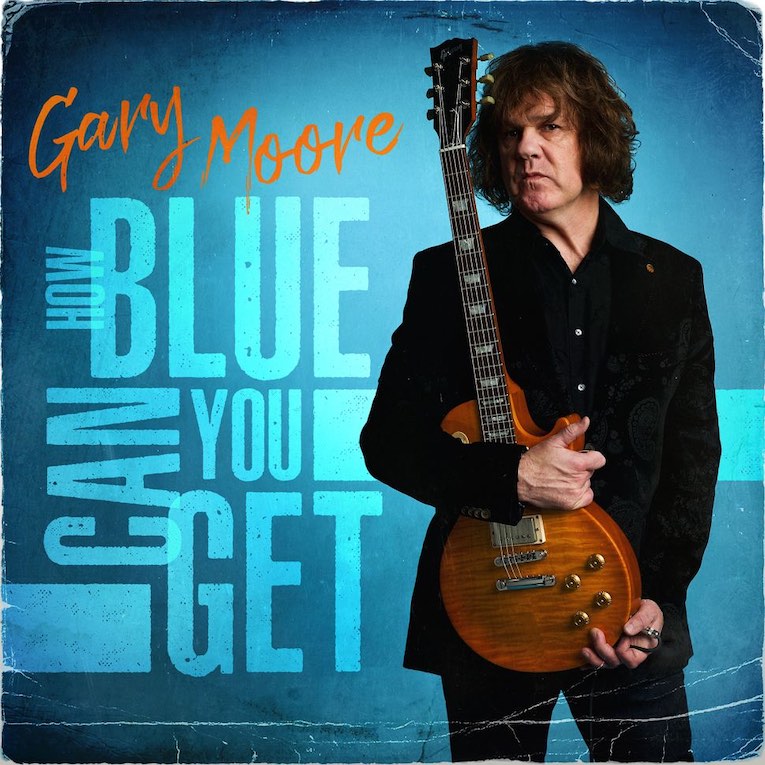 On April 30, Provogue Records will release How Blue Can You Get, an 8-track album of previously unreleased music from Gary Moore’s vault of recorded songs. One of those songs, “In My Dreams” can be heard below.

This month marks ten years since the tragic passing of the iconic Northern Irish musician and singer-songwriter. He left behind, not only an incredibly formidable back catalogue of music from his esteemed solo career, Thin Lizzy, Skid Row, Colosseum II and more, but also a legacy matched by few others.

Venturing deep into the Moore archives, some previously unheard and unreleased deep cuts and alternative versions surfaced to accentuate the beguiling mastery of one of blues’ finest modern exponents. Amongst the songs are unheard and unreleased Moore originals – “In My Dreams,” a lusciously glorious slow-moving ballad with every note and bend weeping as Moore pours out his heart along with the stunningly melancholic “Looking At Your Picture”.

The album kicks off a rip-roaring take on Freddie King’s “I’m Tore Down,” before slipping into a previously unreleased virtuosic version on Memphis Slim’s “Steppin’ Out.” Elmore James’ “Done Somebody Wrong,” is another that showcases his blues chops, as does the enormous 7-minute never been released before scorching take on BB King’s 1964 hit “How Blue Can You Get.” An alternative version of “Love Can Make A Fool Of You,” makes itself at home deep into the blues-rock heart of Moore, in a way that his most loved songs do, whilst the finale soars into the stratosphere with the beautifully aching “Living With The Blues.”

Listen to “In My Dreams”

Despite often being the youngest member in his slew of teenage bands, Gary called the shots. By the age of 15, he was arguably the best guitarist in Belfast, and through the release of the John Mayall/Eric Clapton Bluesbreakers album in 1966, he discovered the blues. In 1990 he released his biggest success, Still Got The Blues. In its ascendancy, the blues were driven by the Blues Brothers movie, John Lee Hooker’s internationally successful album The Healer and the rise to Stevie Ray Vaughan’s stardom. He continued his love affair with the blues for the rest of a career, highlighted by opportunities to play with Albert King, BB King and Albert Collins.

His legacy will live on, and he has and will continue to inspire, from Joe Bonamassa to Paul Gilbert, and Kirk Hammett to Zakk Wylde have all cited him as an influence. Talking to Rolling Stone magazine in 2011, Hammett said, “His influence is strong to the point that the opening lick of the guitar solo of “Master of Puppets” is a variation of a lick that Gary Moore played a lot. I remember the first time hearing his blues album and just getting totally blown away – not only by the playing but by the sound of it too, his tone. And I remember being so inspired that I wrote a couple riffs just based on his sound and his feel. And those riffs ended up in “The Unforgiven” on The Black Album.”

“I met Gary Moore in London on 23 October 1970,” says long-time friend Bernie Marsden. “He was playing with Skid Row and my band Skinny Cat were opening that Friday. We were roughly the same age, dressed in a similar way, except for the beret he wore! We got along well – I immediately realised how good he was, but I also noticed that he was easy going, he cared about the support group and made an effort – believe me, that wasn’t always the case.”

As we sit in 2021, Marsden looks back at those memories that he holds so dear. “Over the next years I turned pro and ran into Gary at gigs in London and socially at the Marquee. We would dig into our pockets and pool our spending money for those evenings but, because it was Gary, we were always offered a few drinks anyway! We spent quite a lot of time together when we weren’t gigging, and soon found out that we had the same influences, mainly Peter Green, Eric Clapton, and Rory Gallagher. I was also with him the day he acquired Peter’s Gibson Les Paul guitar.”

He continues; “We remained close as the years went on, and in 1974 he rang me up to borrow a guitar of mine for a gig he was doing with Colosseum. I still have that guitar today. He was at my wedding in 1980, playing as a part of the pretty impressive house-band, others including Cozy Powell, David Coverdale and Don Airey! We stayed close, and last time we hung out together was on his UK tour with BB King.”

Moore’s solo career was just taking flight when TOTO were heading into superstardom in the early 80s. Steve Lukather remembers Moore and reflects on his admiration for him. “Gary Moore was a force. His intensity, as well as his dynamic sweet soft tones, had such deep feel. He was a master, and I got to watch him play and meet him. He was a very nice man as well. His loss is felt by all who loved him, but we are blessed; we can still hear him play on the records, DVD’s, and all that will live forever. He was a one of a kind.”

His influence continues to stretch and inspire. Chris Robertson, singer-guitarist for Black Stone Cherry, opens up about the power of his music. “Gary Moore took the blues and turned it on its head for me. His ferocity and his style of playing definitely has been an influence on me. There’s a ferociousness on what he does that can’t be matched.”

Don Airey is another long-time friend of his. Reminiscing he says, “Gary was a great singer, lyricist and songwriter, and then there was his guitar playing to contend with, (not to speak of his coruscating Belfast wit).”

He continues, “Working on the “Back on the Streets” album in 1978, Gary overdubbed six different solo takes on “The Road Goes On Forever” each of which was phenomenal, each one different from the others. He asked which I thought was the best. Making a choice, I ventured it would sound even better if double tracked. Having played it once and heard it once, Gary went back into the studio and double-tracked a 16 bar solo in a single take. Chris Tsangarides who was producing and engineering turned round and looked at me wide-eyed. Nothing was said. After a minute or so a voice came up from the studio “Was that any good?” “…Er yes” said Chris “Come in!”.  Gary was the most astonishing musician any of us ever worked with and is still a musical reference point after ten years gone – always asking myself ‘Now what would he think of this!’

As the album of these unearthed gems begins to see the light of day, it highlights Moore’s depth and complexity and how his music has touched so many people. Finally, reflecting Marsden remembers, “We grew up in the business together, and he eventually became a major solo star. I wasn’t remotely surprised, of course, as his playing was so astonishing, a great showman and performer. But to me, he was first and foremost, my friend, and I still miss him today! Enjoy this rare recording.”

How Blue Can You Get is being issued on CD in a limited edition Deluxe Box, CD, and a colour vinyl (Blue) edition LP.  The Deluxe CD Box includes inside 4 guitar picks, 2 coasters, 1 postcard, and 1 sticker.