We’re not really sure what we were expecting from Filipino-British singer-songwriter Beabadoobee‘s debut studio album Fake It Flowers, but it certainly wasn’t this. She’s moved away from the breathy acoustic sensibilities of 2017 single Coffee, and is now traversing a land of dirty guitars and drawn-out vocals filled with nostalgia. 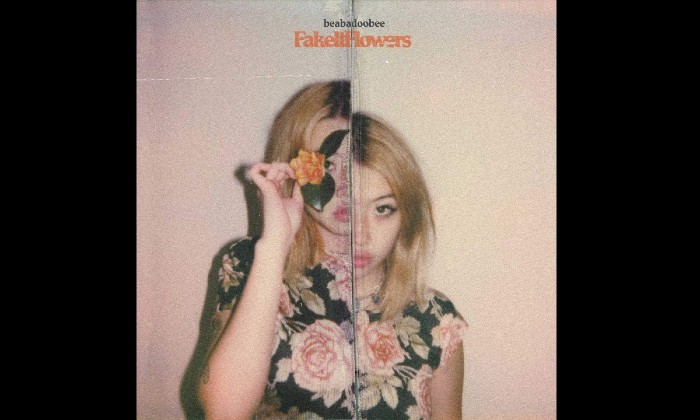 Opener Care introduces a 90s alt-rock theme reminiscent of artists like Liz Phair and Sneaker Pimps – the kind of artists that prove that sweet, girly vocals lend themselves just as well to the rock genre as huskier tones.

The track, alongside Worth It and the penultimate Together, are some of the more uplifting numbers on the album, while songs like the dreamy short-and-sweet Back To Mars and the poignant Emo Song with their twinkly synths explore more melancholy terrain.

Dye It Red feels like it should be in the soundtrack for some angsty teen drama, while Charlie Brown introduces some heavier guitars with sultry verses running in parallel to the punchy choruses.

The track that perhaps demonstrates the feel of the album as a whole is the dark and grungey track seven: Sorry. Here, we open with background studio noises (an old-school lo-fi trademark of which this is not the only example on the album), and our ears are flooded with scuzzy guitars and darker melody.

Further Away is a sleepy follow-up that provides a little relief after Sorry, while the rhythmic Horen Sarrison sees Beabadoobee’s vocals with more clarity than anywhere else on the album. The longest song of the 12, there’s a cinematic feel to this coy love song with some soaring string arrangements proving that the singer’s talents don’t just lie in shoegaze-y bedroom pop.

Meanwhile, How Was Your Day? feels the most under-produced; the squeaky acoustic strings against the angelic vocals provide a rousing contrast, and it’s so refreshing to see an artist embracing a more raw sound.

Closer Yoshimi, Forest, Magdalene is a lighthearted way to end a fantastic album and, frankly, Yoshimi, Forest and Magdalene are awesome names for Beabadoobee’s future kids. The messy close-out refrain gives us serious riot grrrl vibes and shows us that this is a singer who doesn’t take herself too seriously.

Fake It Flowers is certainly a cohesive album, yet often strays away from its comfort zone. And while it may feel a little monotonous at times, there’s enough variance on the album to make it a surprising and memorable debut. Like we said before, it’s far from what we’ve previously heard from Beabadoobee, and it’s definitely going on our top 10 albums of the year list.