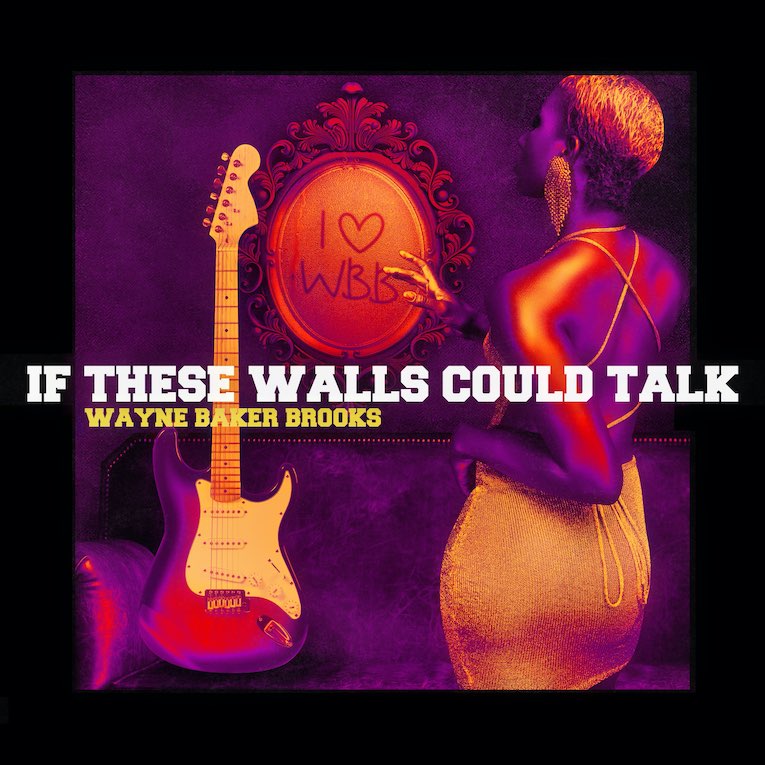 Wayne Baker Brooks is considered one of today’s top guitarists, whose signature style combines powerful vocals with liquid fire guitar playing that honors his rich blues heritage, yet effortlessly expands the boundaries of the genre. ‘If These Walls Could Talk ’ beautifully displays Brooks’ boundary-pushing with the essence of R&B/Soul which is laced throughout the track – being perfected during the recording process with the help of famed R&B musicians Ethan Farmer & Rob Lewis.

Released today, a soul-drenched blues track, “If These Walls Could Talk” showcases Brook’s rich, soulful vocals and his equally beautiful guitar riffs and solos. And a perfect love song for Valentine’s Day.

Born and raised in Chicago, IL, amongst the most prolific blues legends and blues masters in the world, Wayne Baker Brooks’ blues roots may run deeper and wider than the Great Lakes themselves. As the youngest son of blues master Lonnie Brooks, Wayne was literally born into the blues.

Listen to “If These Walls Could Talk”

Chicago Blues laid the foundation to Wayne’s innovative style. Growing up Brooks was a regular visitor to such historic places as Chess Studios, Checkerboard Lounge, Wisefools, and many other blues landmarks, at which he witnessed many live performances by blues masters like Buddy Guy, Jr. Wells, Luther Allison, KoKo Taylor, the great Muddy Waters, & his father. Leaving no way around the fate appointed him he soon joined his father’s ( Lonnie Brooks ) band as his rhythm guitarist then quickly became the musical director. Then in 1997, he formed the Wayne Baker Brooks Band while continuing to work with his father’s band. Performing in more than 150 shows a year with Lonnie and Ronnie Brooks, Wayne Baker Brooks has also played alongside other top blues musicians including Buddy Guy, Otis Rush, Junior Wells, B.B. King, Jonny Lang, Bobby Rush, and George Thorogood.

His acclaimed debut, entitled ‘Mystery’, is an album that brilliantly draws on blues, blues rock, soul, funk and beyond. ‘Mystery’ received multiple awards and praise from the music world, along with his dedicated fanbase.

Along with releasing his book ‘Blues for Dummies’, he was soon touring the world and featured on national TV programs (including ABC, CBS, NBC, FOX, & CNN’s “Showbiz”). He’s garnered multiple achievements throughout his career, including being inducted into the Chicago Blues Hall of Fame and Canadian Blues Hall of Fame, performing for President Bill Clinton, headlining the Chicago Blues Fest and even appearing in a couple of movies – ‘ The Express ’ and ‘Blues Brothers 2000.’

Wayne Baker Brooks continues to play the world over with his signature top shelf brand of guitar playing. His new single ‘ If These Walls Could Talk ’ will be available on all streaming platforms from 12th February 2021.