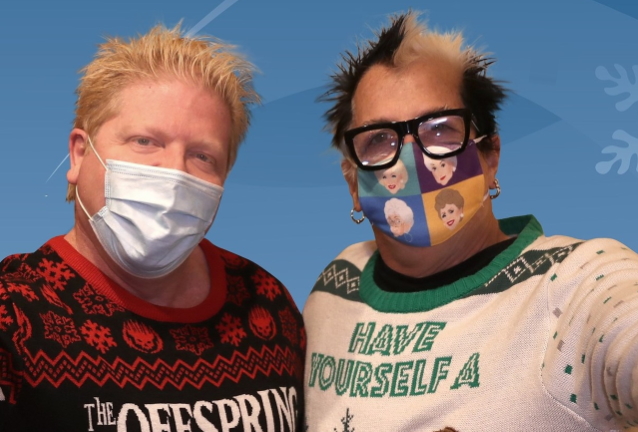 THE OFFSPRING frontman Bryan “Dexter” Holland and and guitarist Kevin “Noodles” Wasserman have confirmed that the band’s long-awaited tenth album will arrive soon. The follow-up to 2012’s “Days Go By” was once again produced by Bob Rock, who also worked on the band’s last two LPs. “

In a short announcement on THE OFFSPRING‘s socials, Dexter said (hear audio below): “We’re putting out a record.

As for when the album might see the light of day, Dexter said: “We have a release date, and we’re going to talk about all that stuff when the label lets us.”

In the summer of 2019, Noodles talked to Finland’s Kaaos TV about the musical direction of the new OFFSPRING material. He said: “It’s definitely an OFFSPRING record. There’s songs that you’re gonna hear that are gonna be easily recognizable as vintage-sounding OFFSPRING, for sure. We’re doing a song live every night called ‘It Won’t Get Better’. We would like to do more of the stuff live, but we want the fans to hear the songs the way we recorded them, the way we want them to hear it rather than a shitty cellphone recording…. One of the songs on there is gonna be ‘Coming For You’, which we released [in 2015], and that song is a good indication as well. Both those songs are pretty much dead center in what this record’s gonna be like.”

Speaking about THE OFFSPRING‘s working relationship with Rock, Noodles said: “We hit it off with him immediately. It’s been a real comfortable relationship. He makes us work and he makes us try harder to be as best as we can, but he does it in a way that’s cool — he’s not being a dick about it. He makes us feel like we can do it. Rather than making us feel like, ‘Oh, man, we’re not playing good enough,’ or whatever, or, ‘We’re not coming up with the best parts for this,’ he makes us feel like we’ve got more in us and we can bring more to the table. So it’s great working with Bob. We love that guy.”

THE OFFSPRING debuted “It Won’t Get Better” live in concert in June 2018 and has been performing it ever since. Noodles described the track as “kind of like a straight-forward OFFSPRING song.”

THE OFFSPRING‘s last single, the aforementioned “Coming For You”, dropped in January 2015.

In December, THE OFFSPRING released the official music video for its Rock-produced cover version of “Christmas (Baby Please Come Home)”, a rock song originally sung by Darlene Love and included on the 1963 seasonal compilation album “A Christmas Gift For You” from Phil Spector.

Last April, THE OFFSPRING jumped on the “Tiger King” bandwagon by recording a cover version of THE CLINTON JOHNSON BAND‘s “Here Kitty Kitty”, a song made popular by Joe Schreibvogel — better known as Joe Exotic, the “Tiger King” — through the Netflix docuseries.

Two years ago, THE OFFSPRING bassist Gregory “Greg K.” Kriesel, who hasn’t performed with the band since 2018, filed a federal lawsuit against Noodles and Dexter alleging trademark infringement and breach of partnership agreement over the rights to THE OFFSPRING name. In response, Holland and Wasserman filed a cross-complaint, denying basically everything Kriesel alleged and asking the court to appoint ‘three disinterested appraisers to appraise the fair value” of Kriesel‘s shares of THE OFFSPRING.