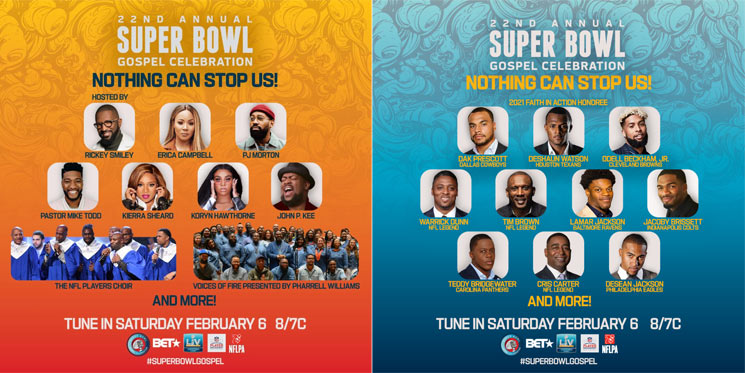 
WHAT: Dallas Cowboy QB Dak Prescott and Tampa Bay Buccaneers QB Tom Brady have joined the All-Star lineup of NFL players set to appear on the 22nd Annual Super Bowl Gospel Celebration this Saturday on BET to congratulate Houston Texans QB Deshaun Watson on receiving this year’s “Faith In Action” Award. Watson will be honored for his philanthropic work to support under-served youth and families. Celebrated NFL running back Warrick Dunn will present the award to Watson during the broadcast.

Additional players set to inspire the audience with testimonials around the show theme “Nothing Can Stop Us” include:

WHO: Hosted by national radio and TV personality Rickey Smiley.


ABOUT THE SUPER BOWL GOSPEL CELEBRATION

The Super Bowl Gospel Celebration was launched in Miami in 1999 during Super Bowl XXXIII weekend. The event became the first and has remained the only inspirational concert sanctioned by the National Football League (NFL). The show has drawn crowds in the thousands and has demonstrated growth year-after-year, selling out venues in major Super Bowl host cities including Dallas, Atlanta, Detroit, Jacksonville, Houston, and Phoenix.