With the joy and excitement of the recent release of their second album ‘Brainfreeze’ still minty fresh, False Advertising popped down to The Forum in Tunbridge Wells to showcase their incendiary live show. Jen, Chris and Josh were top of a bill that also saw local talent take to The Forum stage as both Sheena, and then The Polygons, gave support to the trio hailing from Manchester and Oxford. 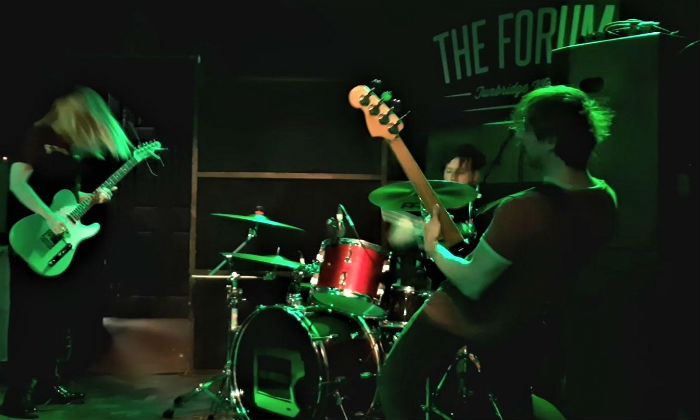 Perched on a slope overlooking the famous RTW Pantiles, the converted toilet block and former funeral parlour played host to an up and coming new talent that has been hotly tipped to shake things up as they go. False Advertising began some six years ago and after a string of self-released singles, EPs and one prior eponymous album, they finally seem to be on the verge of a breakthrough (With the election looming and so much fake news about I’m sure that their website alone must be experiencing a larger than normal amount of traffic as people search for the truth).

The thrust and thrash of frenzied oddballs Sheena were first onto The Forum stage in front of a wildly divergent crowd composed of Mums, Dads, middle aged seasoned gig goers and a sizable proportion of excitable teens in Day-Glo tops and box fresh kicks. The Jazz (Drummer’s joke) band played an energised set of songs about TV show Fort Boyard, mental illness, Mr Rochester (and his “stupid hair”) and, of course, the government, with their final impassioned song of their set ‘Serpent’. “I don’t feel like we’ve even been on five minutes! If you want to book us for your local we’ll be in and out real quick… before you’ve even finished your pint.”

Four-piece Kent band The Polygons were next up and were clearly the reason behind the female heavy teenage contingent. Their well-appreciated set started with the title track from their first EP, released in October this year, ‘Attention To Detail’, and ended with ‘Want’. In the interim mix the quartet of young men (All of whom looked like they’d go down well if any of the younger ones had brought them home to meet their mother) treated the partisan crowd to new tracks ‘Alright’, ‘Runnng’, ‘Bedroom’ and all ‘All I Need’, during which they summoned on a large degree of crowd participation to bring them from the floor to a pogo when the beat kicked in. The highlights of their very enjoyable slot came mid-set with the undeniably infectious opening track off the EP, ‘Tell Me Something’, and their quite brilliant cover of ‘I Bet You Look Good On The Dance Floor’.

With the local talent having had their turn it was time to welcome False Advertising to the stage for an act in three parts. In a potentially unlucky thirteen track setlist, Jen Hingley led the way with her magnetic stage presence, fevered guitar work and banshee wails. Opener ‘You Said’ gave way to ‘You Won’t Feel Love’ as the threesome tried as hard as they could to generate something out of the diminished, and rather flat, audience that remained. Another of the new album’s tracks ‘Uncomfortable’ headed up one of their oldest and hottest ones ‘Dozer’. The pace slowed, just, for ‘Hey You’ and ‘Reading It Wrong’ before a change of tack.

Mid-set Jen swapped her guitar out to take a seat at the drums whilst Chris Warr vacated his seat and took to the front of the stage to join bassist Josh Sellers. The next three tracks where the roles were swapped were, in my humble opinion, the weakest of the night. There was a loss of momentum which, no offense to Chris, saw the driving force of the band given a back seat role. Chris sang well enough and Jen is no weak link on the drums but changing the dynamic, however original or quirky, didn’t pay dividends. The slacker Grunge of ‘We’ve Heard This All Before’, pounding ‘Personal Gain’ and ‘At The Top’ lost another portion of the ever thinning crowd.

After the switchback ‘Breaker’, and a blistering ‘Not My Fault’ restored the balance in favour of the band, Jen played the bejesus out of her guitar and put her all into a performance that was woefully under appreciated. False Advertising returned to their new album as they closed out their set with two of its best tracks, ‘Influenza’ and, finally, the thunderous ‘Wasted Days’.

On a different day in a different venue with a different crowd this would have been a great gig. As it were, False Advertising were very good and The Polygons were definitely ‘ones to watch’ for in the future but the sparse crowd and lack of atmosphere didn’t help a band with a lot of energy, huge potential and some killer tracks.