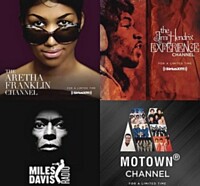 These Limited-engagement channels will salute Black artists ARETHA FRANKLIN, JIMI HENDRIX, MILES DAVIS, and others. In addition, the sounds and artists from the MOTOWN record label will be recognized.

All of this specialty programming will be available throughout FEBRUARY on the SIRIUSXM app, Internet connected devices, and home smart speakers. Each of these channels will also be available on a respective satellite channel for a limited time.

THE ARETHA FRANKLIN CHANNEL will pay homage to the “QUEEN OF SOUL” by featuring her catalog –from her early recordings to biggest hits.  Listeners can also expect to hear music from artists that have been influenced by her.

THE JIMI HENDRIX EXPERIENCE CHANNEL will let listeners into the world of the rock guitarist and singer. He’s credited with redefining music with his compositions on the electric guitar, studio and live performances, demos, and original programming.

The influence of HENDRIX will be represented on “MY HENDRIX EXPERIENCE,” a show curated by guest DJs. They will share their love of HENDRIX and his music. Additionally, the channel will feature music from artists that influenced HENDRIX, as well as those that were influenced by him and that have covered his music.

MILES DAVIS RADIO will honor one of the most acclaimed figures in the history of jazz music by showcasing music from over 100 of DAVIS’ albums and featuring alumni band members as hosts. These band members include MARCUS MILLER, LENNY WHITE, JOHN BEASLEY, JOEY DEFRANCESCO, VINCE WILBURN Jr., and others.

THE MOTOWN CHANNEL will celebrate the record label envisioned by Founder BERRY GORDY. The channel will feature history-making music from SMOKEY ROBINSON, DIANA ROSS & THE SUPREMES, MARVIN GAYE, STEVIE WONDER, THE TEMPTATIONS, THE JACKSON 5, and many others.

The channel will also feature a special virtual event to celebrate the 60th Anniversary of THE SUPREMES with founding member MARY WILSON.